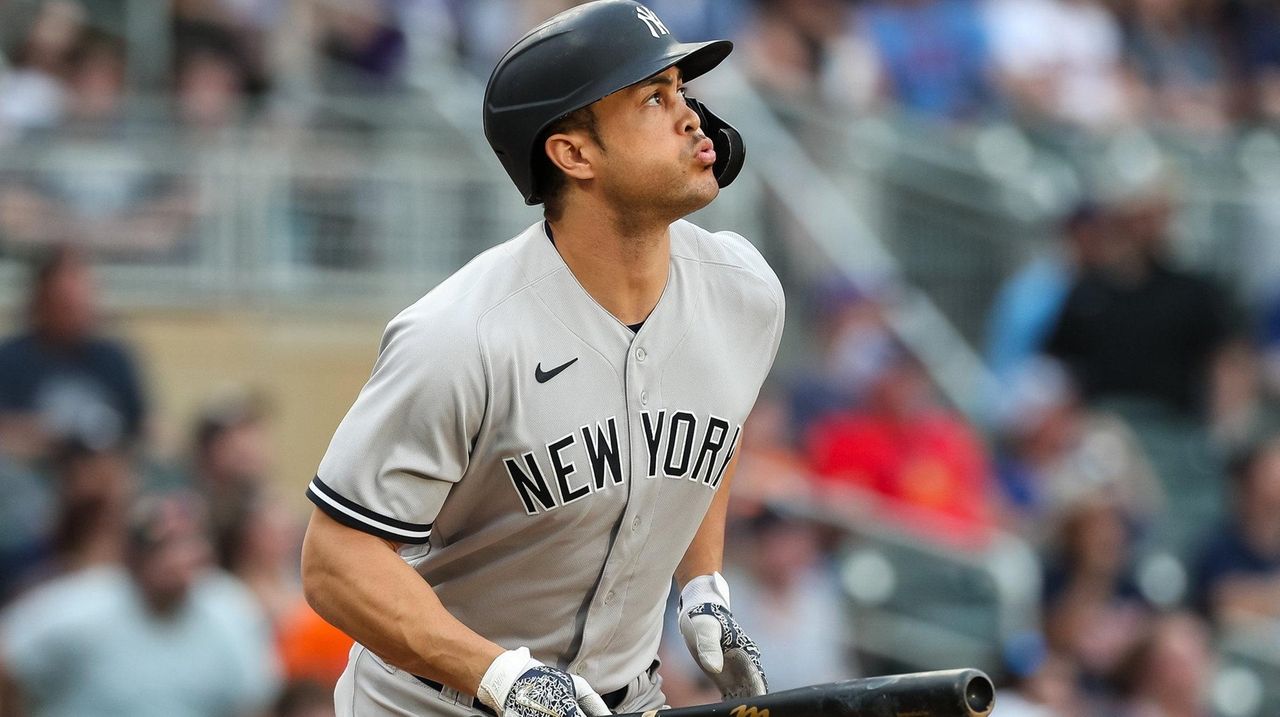 MINNEAPOLIS – Gerrit Cole’s offense did the retaliating for him.

And in the end, the narrative of fireworks erupting between Cole vs. Josh Donaldson never materialized as this became obvious fairly quickly: Cole, regardless of what was or wasn’t on his fingers when it comes to sticky substances Wednesday night, is still a very good pitcher.

And the Twins, still a very bad team, had no chance against him, or the Yankees.

Thus, the 9-6 victory by the Yankees, who got six solid innings from Cole and four homers overall – two from Giancarlo Stanton and one each from Aaron Judge and Miguel Andujar – at Target Field was a completely predictable result on another humid night.

It marked the first time this season the Yankees’ offense scored eight or more runs back-to-back games. That they achieved it against the Twins was also utterly predictable. The Yankees (33-29) improved to 105-37 against Minnesota (24-37) since 2002, including the postseason.

Donaldson, who implicated Cole last week and again before Wednesday’s game as being among the many pitchers in the sport using illegal substances for extra movement (spin rate) on their pitches, went 0-for-3 against Cole, striking out in his first two at-bats.

Cole, who came in 6-3 with a 2.26 ERA, allowed two runs – both coming on solo homers – and five hits over six innings. The righthander struck out nine and did not walk a batter, giving him 103 strikeouts compared to 11 walks in 81 2/3 total innings.

His counterpart, righthander Rodney Dobnak, came in 1-5 with a 6.19 ERA and, continuing with the predictable nature of the evening, was hammered for eight runs and 11 hits over 4 2/3 unsightly innings. He allowed all four of the Yankees’ homers.

Already pitching with a 1-0 lead, courtesy of Judge’s 15th homer of the season in the first – a rocket to left on a 0-and-2 slider – Cole got Twins leadoff man Jorge Polanco to ground to second.

Up stepped Donaldson, whom Cole quickly put in a 0-and-2 hole before throwing a slider in the dirt. Donaldson fouled off a 100-mph fastball to keep it 1-and-2, then Cole struck him out swinging at a curveball. Cole appeared to stare down Donaldson for a half-second before seemingly ever-so-slightly tipping his cap at the third baseman.

Cole struck out Donaldson in the third on a 2-and-2 slider, then got him to fly softly to center leading off the sixth (Donaldson reached on an error by Tyler Wade leading off the eighth against Luis Cessa).

Cole’s 94th and final pitch of the night was a 98-mph fastball that struck out Ryan Jeffers to end the sixth.

The Yankees, meanwhile, got 15 hits from their offense, including three from Stanton, who came into the night 4-for-28 since returning from the injured list May 28.

After the Yankees got one in the second on Brett Gardner’s RBI double to make it 2-0, Judge led off the third with a double and Gleyber Torres walked. Stanton, who smoked a double in the first that came off his bat at 118.3 mph, launched a hanging 0-and-2 slider to dead center for his 10th homer that made it 5-0. The Twins got one back in the bottom half on Jorge Polanco’s seventh homer.

Torres led off the fifth with a walk and Stanton ripped another 0-and-2 slider, this one to right-center, to make it 7-1. Two batters later Andujar slammed his fifth homer, a solo shot to left, to make it 8-1. Miguel Sano’s homer leading off the fifth, his 12th, made it 8-2 and Andujar’s sacrifice fly in the seventh made it 9-2.

Erik Boland started in Newsday’s sports department in 2002. He covered high school and college sports, then shifted to the Jets beat. He has covered the Yankees since 2009.