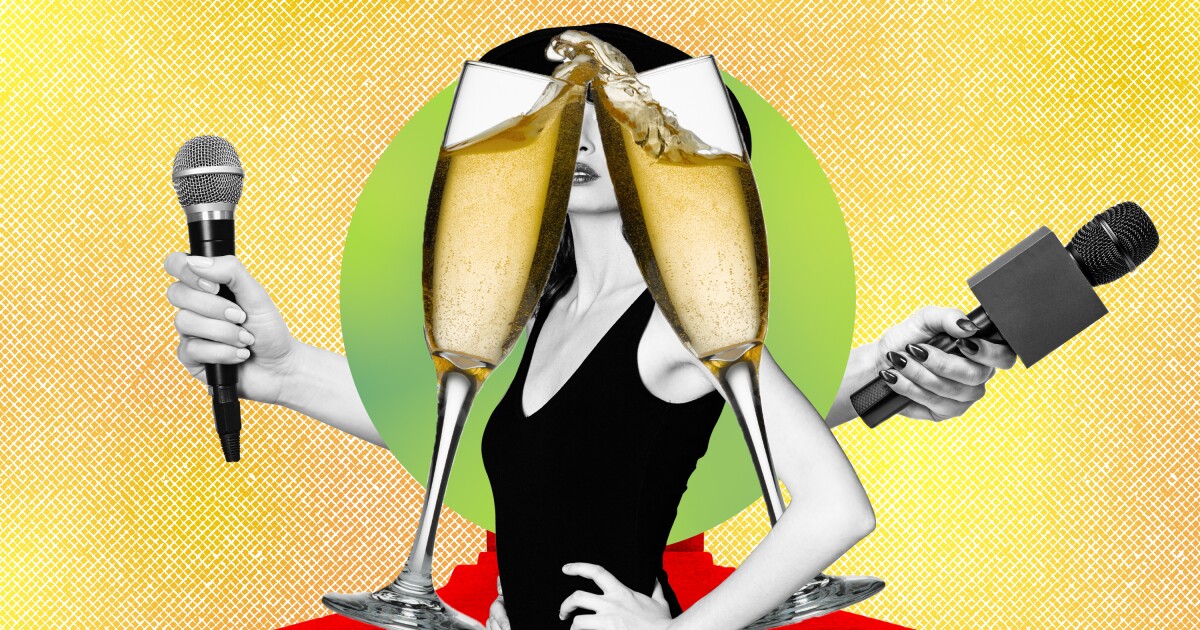 Once upon a time, celebrities wanted to discuss who they were wearing, and it was my job to talk to them about it.

I would approach Reese Witherspoon, Jennifer Aniston, Kerry Washington, Cher, Salma Hayek Pinault and other major stars inside intimate industry events in Los Angeles. Over cocktails or dinner, occasionally brunch or lunch, we would chat about dresses, their hair, the party scene and their philanthropic work whenever the event benefited a cause.

This was long before the term “social distancing” invaded our daily vernacular courtesy of the pandemic.

This awards season, which is unlike any other, I’ve found myself reflecting on those brief exchanges with Hollywood’s biggest names, candid moments that live on in my memory and on old recordings — some so ancient they were documented on an iPod classic.

The interactions helped make me who I am and, in many ways, represent another era of life for me and, perhaps, the cultural zeitgeist. They signify an age of innocence when community, camaraderie and connection didn’t feel like long-lost friends, and parties were held IRL instead of over video chats.

Like in 2008, when I met Rihanna. Back then, she was she was still just a “Good Girl Gone Bad” who hadn’t yet reached “Rated R” territory.

“I never get to party,” Rihanna purred into my recorder during an InStyle pre-Grammy event at Hollywood club Boulevard3. “Tonight is the night.”

Four years later, I approached her at another pre-awards event, the Roc Nation brunch, which had been sponsored by Gucci.

“Hey, honey, what’s up?” said the singer-turned-entrepreneur, perched atop the winding main stairway at Soho House in West Hollywood. She addressed me as if we were old friends, but Rihanna meets more people than the Pope. I was under no illusion that she remembered me. She’d simply become accustomed to strangers approaching her and knew how to play the game.

I pulled out my recorder as her blond curls bounced with the effortless ease of a superstar whose hairstylist had spent hours coiffing each individual curl. “I woke up with my hair like this,” she said. “I took a shower last night after rehearsals, and it was curly.” Her new hue “was inspired by ‘Scarface,’” she said.

Minutes later, Rihanna found a friend in Katy Perry, who was hanging out in a roped-off VIP area. At the time, Perry had just divorced Russell Brand. I wasn’t surprised when she declined to do an interview with me. However, Perry proved happy to oblige when I asked who made her blue and pink dress, which perfectly coordinated with her electric blue hair.

I was used to coy responses. And, hey, coy can sometimes be cute. Anything funny or strange worked too. Michelle Williams (the Oscar-nominated actress, not the Destiny’s Child singer), once insisted to me that she hadn’t dyed her hair, that it was darker because it “never sees the sun because it lives under wigs most of the time.”

Her best friend, Busy Philipps, seated next to her, chimed in. “I think that when you were in Michigan, it must have been so dreary that your hair just went dark,” she said, adding to the bit.

Was any of this breaking news? No.

But we all know you’ve clicked on those inane, photo-driven stories over the years or you probably wouldn’t be reading this one right now. (“Rihanna Debuts New Blond ‘Do at Grammy Party”; “Katy Perry Steps Out in a Body-Hugging Dress”; “Michelle Williams Swears She Didn’t Dye Her Hair.”) I didn’t write the headlines, but it was my job to become fast friends with stars for a quippy quote or two. Sometimes it was for a fashion or beauty news item, other times for a party story.

As an entertainment journalist in my early 20s, new to Los Angeles and just looking to pay my dues and my bills, there were about as many splashy awards season parties as there were nominations each year.

Night after night, the venue and crowd may have differed, but it was always the same song and dance, with choreography that any nominee or aspiring nominee knew well. The true stars almost always played along, which helped me craft a story that allowed readers to feel as though they’d also been a well-heeled fly on the wall. Others, who shall remain nameless, ate me alive at parties, but their behavior reiterated a valuable life lesson that I’d already learned during my teen years, which was that it said more about them than it did about me.

“You’ve got to have balls of steel in the party biz,” an editor once told me after an actor berated me for approaching him.

I don’t know about balls, but I had an arsenal of little black dresses. What I wore became my armor. It helped me kick my wallflower instincts to the curb and masquerade as the social butterfly I wish I’d been in high school and college. No matter that I often gave myself pep talks on the car rides over in which I repeated mantras like, “You are just as successful as these people. You are just as worthy,” like a poorly written version of Al Franken’s “Saturday Night Live” character’s lines: “I’m good enough, I’m smart enough, and, doggone it, people like me!”

Eventually, I graduated from LBDs to designer dresses I found through consignment shopping. I purchased a black and fuchsia Zac Posen cocktail dress previously owned by my childhood idol Paula Abdul, a structured gray Oscar de la Renta wool dress that Naomi Watts once complimented me on, a red and black silk Dolce & Gabbana dress and several other designer dresses that helped me embody the part of someone who belonged. These dresses took me from one season to the next and taught me the value of shucking fashion trends for timeless style and taste.

Over time, politely interrupting Matthew McConaughey and Kate Hudson at a Screen Actors Guild Awards afterparty became as well-honed a skill as the art of asking a silly question in such a way that I was in on the joke. (What would it take to get Hudson on the dance floor? “What would it take?” she repeated back to me in 2008. “A later night! It won’t be happening tonight! I’m a working girl and I’ve also got my son. I can’t be up too late!”)

While snappy soundbites were most common, occasionally, you’d get more insightful responses such as at Alfre Woodard’s awards-season dinner, which often attracted Oprah Winfrey, Viola Davis and Octavia Spencer.

“The only time we hear each other’s names is when our representatives are cursing the fact that one of the other of us have gotten a job,” Woodard told me over mint juleps in 2012, explaining why she had her annual affair. “It’s a big town, so I think it’s important for us to get together. … We’ll trade secrets. Eventually it will get down to talking about sex. It always does. We’re so thirsty to relax into the arms of somebody that gets us.”

Added Davis: “There’s something about getting together and shared experiences to make you feel less alone in your experiences.”

Writing about Hollywood hoopla largely lost its luster over time, but looking back, I can now say that the good times were good. I had a front row seat to the industry’s most celebratory moments and trends that were unfolding in real time.

With a pandemic, this year’s awards season is extremely different. We had glimpses into the homes and hotel rooms of nominees and winners. Parties are, at least momentarily, a thing of the past, but there is a time and place for them. I know firsthand because this isn’t my first season spent on the sidelines.

I never get to party. Tonight is the night.

When my daughter was 4 months old, she was diagnosed with a rare mitochondrial disorder. The awards circuit coincided with the nearly two months we spent in the hospital. Eager to maintain health insurance and a career he’d worked hard to achieve, my husband, an entertainment photojournalist, attended the Golden Globes to photograph the red carpet. My friend Katie kept me company at the hospital that night.

“We’ll throw our own Golden Globe party,” she’d said in an attempt to be upbeat.

As my daughter slept, Katie and I watched the show on mute. The sounds of the hospital took center stage: the beeping machines, the nurses in the hallway laughing while on break, the sound of my daughter’s breathing. On a television next to her bed, we watched in silence as people paraded around in gowns while winning awards. I found myself thinking, “Who cares about parties, dresses, films or Hollywood when the world feels like it’s crumbling around us?”

In the weeks that followed, my reality strayed further and further from the normal I once knew, but I started to realize that self-care meant getting back out there. Getting dressed. Going to work. Socializing. Celebrating. Even if they were other people’s wins, optimism was contagious.

To many people, awards season may seem like self-congratulatory silliness, particularly now, which is likely why many of the shows have seen their ratings slip this year.

As someone whose life and livelihood has become a constant balancing act of material things and an often darker reality spent in and out of the hospital with my daughter, I’ve found it’s important to remember: Life is precarious. No one knows what the next day, month or year brings. Movie stars aren’t exempt. Happiness and sadness are equally fleeting, so when it’s your time to celebrate — do just that.

Further, beyond the smoke and mirrors, the truth is that the awards, the dresses and the parties are all meant to be a marketing tool. Margot Robbie was quick to remind me of this last year, just weeks before the pandemic unfolded.

Under strung lights during cocktail hour at the Chanel and Charles Finch dinner at the Beverly Hills Hotel’s Polo Lounge, I asked what Robbie’s Oscar nomination for “Bombshell” meant to her.

“It just means that hopefully more people will watch the movie, which is what I really want,” Robbie said before catching up with Penélope Cruz. “Awards recognition can do that for a film.”

With that likely in mind, Robbie appeared at this year’s Golden Globes, clad in a floral printed dress from Chanel’s spring-summer 2021 ready-to-wear collection. As a producer on this year’s Globe and Oscar-nominated dark comedy “Promising Young Woman,” Robbie attended the show to introduce the film’s trailer. No doubt she would have attended afterparties to help hype the film, had there been any.

For Chanel and Finch’s part, in lieu of a soiree this year, organizers are sending their perennial guest list a package so the film and fashion elite can toast this season’s nominees at home the night before the Oscars. They decided against having a virtual event but wanted to commemorate the moment.

But there are signs of what’s to come. The organizers of the Met Gala, which typically happens in May each year, have postponed the annual large-scale affair, opting for a more intimate benefit on Sept. 13. A starrier gala is scheduled for May 2022.

For industry insiders, the show — and the circus surrounding it — must go on. While times have changed and it may appear as though the party has momentarily come to an end, it’s clear that one day it will return. And when it comes time to celebrate, we will again.