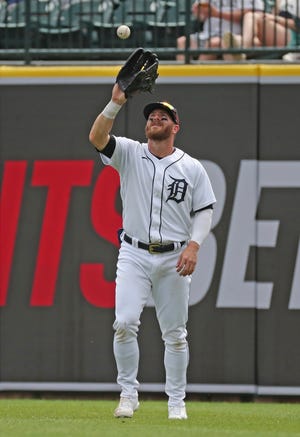 “I know it’s been going on for a pretty good time,” Grossman said. “I just don’t think about. I try not to say anything about it. But I guess it’s pretty cool. I’ll just continue to do what I do and be who I am and see what happens.”

Since Grossman didn’t commit an error in Game 2, the 10-year MLB veteran entered Wednesday with 402 consecutive error-free games. He hasn’t made an error since June 13, 2018, as a member of the Minnesota Twins.

“I come to the park every day trying to get a little bit better,” Grossman said. “I stay true to myself. I’m happy about it, but I don’t want to talk about it.”

The most recent error from Grossman occurred at Comerica Park.

Playing right field for the Twins, Grossman was charged with a throwing error on Leonys Martín’s single in the eighth inning of a 5-2 Tigers win. His mistake allowed Victor Reyes to score for the Tigers’ fourth and final run of the inning.

Since then, Grossman’s defense is perfect by the standards of official scorers.

The 32-year-old has 21 errors over his career: 14 in left field, six in right and one in center. Most of his playing time is accounted for in left (450 starts), but he also boasts experience in right (201 starts) and center (30 starts).

“He practices. Like, he practices it every day,” manager A.J. Hinch said. “His routine before the game is rock-solid. He holds himself to a high bar. He’s very prepared. He’s probably the most manic about being in the right position at the right time. He’s just dialed in to every detail.

“Everything matters to Robbie. When you hear that, you’re not surprised because he prepares. I love that about him. I always have. The recognition he’ll get for a streak like that is well deserved.”