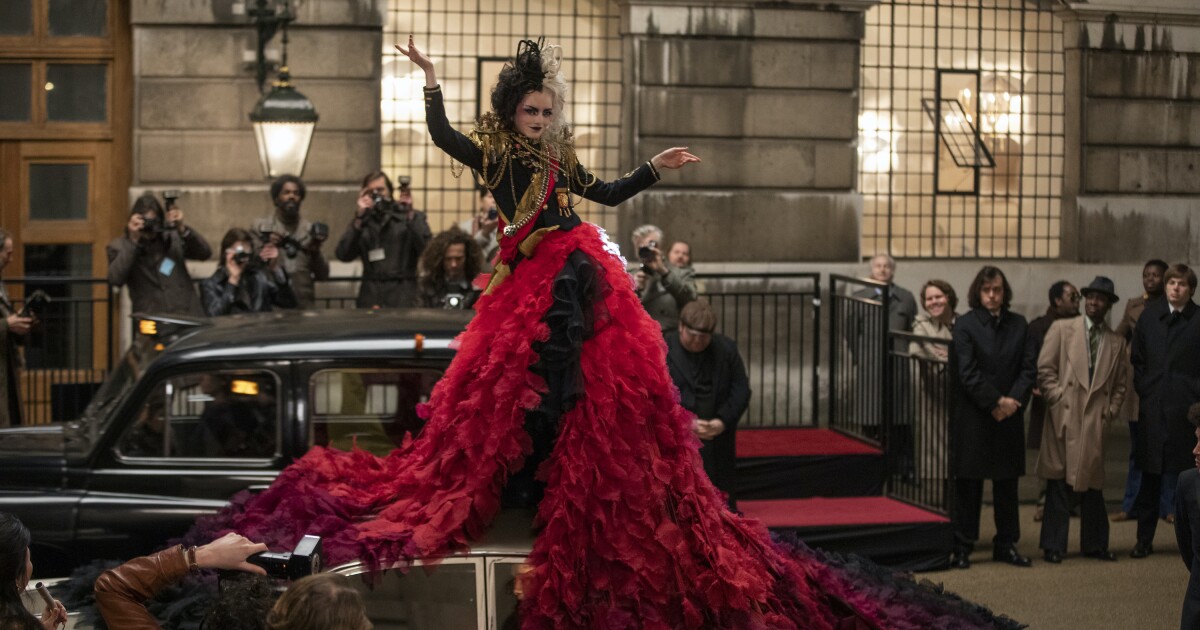 To create a believable backstory for Cruella, the gaunt, screeching villain from Disney’s 1961 animated classic “One Hundred and One Dalmatians,” director Craig Gillespie also needed a believable setting. Gillespie’s new live-action origin story, “Cruella,” plants a young version of the character, called Estella, in 1970s London where she’s an aspiring fashion designer. Although it’s not specified, the director sees the story, based on a screenplay by Tony McNamara and Dana Fox, unfolding in 1978 — the heart of the punk era.

“As a character, we’ve created this journey for her where she has this inner voice and she has this talent she’s trying to express,” Gillespie explains of Cruella, played by Emma Stone. “But she’s penalized for it because it’s outside of the constructs of society at the time. She’s in this rigid English system where you can’t be outside the lines. It’s not until she ultimately leans into who she truly is and that strength that she really flourishes. But she’s had so much trauma along the way that it’s not the best version of herself. That idea set against the punk scene in London where it was all about self-expression against the establishment was such a natural fit.”

Estella first arrives in London as an orphaned child in the late ‘60s, setting up in a squatter’s apartment with her cohorts Horace and Jasper. After a failed job at posh department store Liberty of London, Estella gets hired by Baroness von Hellman (Emma Thompson), an old-school designer whose upscale aesthetic stands in contrast to Estella’s edgier vibe. Eventually, Estella begins popping up at fashion shows around London under the name Cruella, including a memorable scene where she rolls out of a garbage truck wearing old Baroness gowns sewn together.

“It was a time where there was a big shift into counterculture and [the] Sex Pistols, anti-establishment mentality,” Stone notes. “Obviously this is a Disney movie about a villain. This isn’t really as punk as it gets. But that era and that feel of going against the grain in a major way, especially in London, is exciting for a character like Cruella, who is born to be bad. And definitely doesn’t want to blend in, deep down. Even though Estella is a bit more conventional because of her nurture, I think the true nature of Cruella is letting your freak flag fly.”

Costume designer Jenny Beavan, whom Gillespie hired after seeing her work on “Mad Max: Fury Road,” created 277 costumes for the principal cast, including 47 for Cruella. Beavan took some cues from Vivienne Westwood but ultimately wanted to create unique, original designs that felt both true to the time period and innovative for modern audiences. Beavan’s team looked at numerous vintage pieces but remade everything themselves. Estella’s chic military jacket is historically accurate, but overall Beavan wasn’t trying to make Cruella a replica of London’s punk scene.

“We’re in the spirit of the ‘70s,” says Beavan. “I don’t know anyone who basically looked like Cruella. I know people who looked more like Estella at the beginning. I wouldn’t say we were slavish. I always think if it feels true and nobody questions it, then go with it. Rather than getting into a complete pickle about whether anyone had that exact thing. And people often wear things from the past.”

“From a character standpoint it was Alexander McQueen for me,” Gillespie adds of Cruella’s style (Glenn Close’s version of the character was also an avant-garde fashion designer in the 1996 live-action remake of “101 Dalmatians”). “His rebellion against the establishment and the shock value of his shows and the creative outrageousness of some of his work. I felt like that was very much in character with what Cruella was trying to do. It’s obviously not like anything that he was doing, but the aggressiveness of the pop-up [fashion shows] she does throughout the film is similar. And being able to create her own narrative with the press was something I took inspiration from with McQueen.”

The Baroness, who only wears her own designs, is an amalgam of Balenciaga, Schiaparelli and Dior, with sculptural, severe pieces. Production designer Fiona Crombie researched Dior’s Paris workshop when designing the sets for the Baroness’ offices.

“I loved the idea that it was an atrium glass box and the idea that she could always look down. I wanted it to be unbearably elegant. I wanted it to be precise and elegant with everything laid out exactly in a very organized manner. For the details, we looked very closely at the archival footage of Dior. All of the details, like the swatch cards and the way the fabrics are placed, a lot of that was very much directly taken from the Dior photography from the ‘50s.”

In contrast, Crombie wanted Estella’s home studio to feel like images she found of McQueen’s workshop, which was much more self-made than Dior’s.

“There were some photographs I had where it was very simple and very improvised,” Crombie explains. “Dior was like an industry, that environment, whereas the photographs I had of Alexander McQueen, which may not have been representative of what was happening, were of a person on their own working. Just in a really simple way, in a chair, with a table and a mannequin, just creating. I remember that being very informative of the idea of a singular mind working to express themselves.”

Crombie also recreated Liberty from the 1970s (although some of the visual touches, like the paisley carpet, were hers). The exterior shots were done at the actual department store on Carnaby Street in London’s Soho, and the scene where Estella, Jasper and Horace run out of Liberty and jump onto a moving bus was the first day of filming.

“We could only shoot outside Liberty on a Sunday morning at like 5 a.m.,” Crombie remembers. “I was driving into London on the way to the set and people were still out from Saturday night — that’s how early it was. That’s all we could get and we built the interior on a soundstage. Liberty were incredibly generous and gave us access to archives and let us scan the building to get the right carving details, and we built the ground floor. It was very important for us to sell the idea that this is the ultimate place, the most fashionable store in London.”

“They made it look exactly like it did,” Beavan says. “Dreary, to put it mildly. Except we thought it was wonderful. Liberty was a real treat to go to. It was a revolutionary thing in London and it meant you could go around and see a lot of different designers.”

Cruella’s aesthetic — and her behavior — is pretty punk rock, and Gillespie curated a soundtrack to match, bringing in songs by artists like The Clash, Blondie and The Stooges to set the scene. And while the movie is a visual delight, with ornate set pieces and massive, ornate costumes, Gillespie wanted to ensure that “Cruella” was a character-driven story that allowed the viewer to potentially understand a misunderstood woman.

“You don’t want the fashion to overwhelm the creative content of the scene and the characters,” Gillespie says. “So you have to have outfits that can draw attention when you want them to, but you don’t want background extras and other people to be distracting. There’s certain cliches you can fall into about the conception of what the ‘70s was, but the reality of the eclectic nature of it needed to be there. There are pieces people wore from years ago — same with the houses and the cars. It’s all a cumulative point to that moment. It had to feel organic.

“Getting the intimate scenes working and the dynamic between [Cruella and the Baroness] was everything,” he adds. “I knew everything had to hang on that and if that wasn’t working we didn’t have a movie. Once it was working I felt like then I had the freedom to pile on all of this visual stuff around them.”

What a Light, Healthy Recipe Needs: A Drizzle of This Sumptuous Sauce

Father's Day gifts to give to Dad