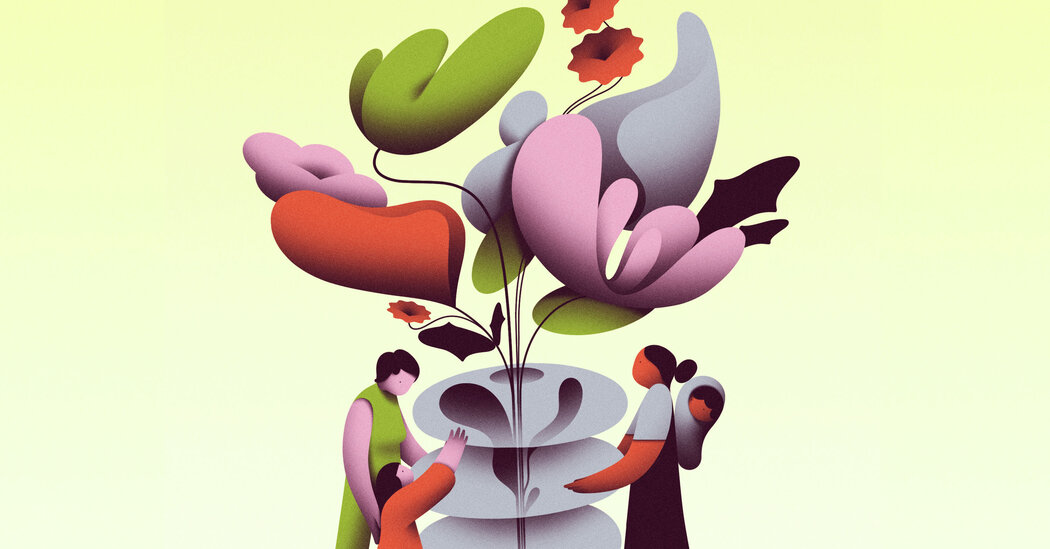 For Mother’s Day, we asked Times readers to share the gems of advice that have gotten them through the tougher moments of mothering. We received nearly 3,000 responses — with practical tips (buy precut fruit), hard truths (loss is an inevitable part of the job) and funny observations (never, ever, try to argue with a 2-year-old).

Click the stickers below to read more advice from moms, and add your own pearls of wisdom in the comments.

My mom said to me as a teenager, “I’ll always love you, but I don’t have to always like you.” It helped me keep things in perspective and learn to be more forgiving and understanding.

My mom told me she was asked to give advice to someone at a baby shower. She wrote in the advice book, “Stay hydrated.” At the time, I thought she was trying to be funny, but now I realize it’s one of the few things you can control. And while being hydrated might not solve any big parenting problems, it likely won’t make things worse.

No one prepared me for how much loss I would experience as a parent, specifically in watching my child grow up. There’s this constant grieving of the younger selves they leave behind. But when I shared this with a mom friend whose daughter was a couple years older than mine, she said: “It is hard, but every new stage is better than the last. It just keeps getting better.” Her advice changed the way I related to my daughter’s growing up. While I still miss the little girl she was, now I look forward to the next version of who she’s becoming.

There’s an Urdu saying in our culture: Suno sab ki, karo apni. It means, “Hear everyone, but do what you want.” I was given this advice by my paternal uncle a couple of months after I had my twins. Using this method has made me not just make decisions on my own but also stick by them. Some of my decisions haven’t worked, but a lot of them have. At the end of the day, it all comes down to you and your child. Just like any relationship, this one, too, has to be built with love, trust and respect.

My son is on the autism spectrum, and his frustrations controlled him as a child — breaking things, tantrums, hitting. My standard approach to parenting, to reward good behavior and punish bad, wasn’t working. An autism counselor told us that when my son did something wrong, he knew he’d done wrong and didn’t need to be punished. He needed me to hug him and say, “You must be so frustrated.” Everything changed when I did that. My son calmed immediately, was contrite, and we were able to work on solutions. And then I did it with my daughter, my husband, my friends and myself. We all need love and acceptance more than we need blame.

My friend Anne always reminds me that parenting is a game of “for now.” My kid is sleeping or not sleeping “for now.” The toddler is eating or not eating “for now.” Children change so quickly that it’s not worth trying to predict their next move. The best we can do is tolerate the tough times and enjoy the goods times because, either way, it’s “for now.”

A dear colleague advised me, “Buy the precut fruit.” It has become my daily reminder to take the shortcuts that make life and parenting easier (and to do it without guilt).

My son, at about 3 or 4 years old, would not remove his shoes before bedtime. We kept insisting that he do so, wanting him to be most comfortable. He cried and cried as we struggled with him. I mentioned it to his pediatrician, who said, “Let him keep his shoes on; he simply wants to be ready and not miss anything that goes on!” So he slept with shoes and eventually removed them on his own! So don’t struggle before bedtime!

Throughout motherhood, you’re allowed to be overwhelmed and overjoyed. You can wish for the days to pass quickly and also not want to miss one second with your children. You can miss your life before motherhood and, at the same time, love your life as a mother. The truth about motherhood is it’s not an either/or situation. You can be both. You can feel it all. Feeling it all doesn’t make you a bad mom. It makes you human.

Don’t do anything while the baby’s asleep that you can do while it’s awake. This can be extended to older kids, too — find ways to do the things you have to do (chores, errands and the like) with your kids, so that your kid-free time is just that — free time.

Whether it’s good or bad, it’s temporary. That applies for your child’s behavior, school situation, friendship issues, etc. Don’t get too smug when parenting is easy (although you should enjoy it!) and don’t get too despondent when it’s hard. It all passes.

Never argue with a 2-year-old.

These powerful words were from the labor and delivery nurse at the hospital when I checked in to give birth and was visibly struggling with deciding if I wanted an epidural. The nurse could sense I was trying to prove something to myself and said, “Honey, no one walks out of here with a trophy. Just remember that.”

My son was born 10 weeks early, which means that many of his early milestones were delayed. We did therapy, and I fretted. We saw specialists, and I worried. He was monitored by so many different doctors, and I stressed. A kind older mom passed along this advice, and it was a balm to my stressed mama soul: Kids do everything in their own time. My son is 9½ now. I couldn’t tell you the month when he walked or said his first word or read his first sentence. He did them all in his own time.

Play to your strengths

You are not necessarily going to be “good” at being a mom at every stage of the child’s life. You may be better at dealing with a toddler than with a newborn, or even a 9-year-old. Just as we all excel at some things, know that you may not have the best skills at every stage.

When your child is 21, no one will ever remember how quickly they were potty trained.

I was 43 and single when I adopted my then-2-year-old daughter. I had no idea what I was doing. As I was sorting out the pros and cons of various forms of child care options — pondering the “long term impacts” of this and that — my sister, who had married her college sweetheart and had two teenagers, gave me the best parenting advice I’ve ever received, which I frequently reflect on and share with new parents: “You want the very best for your children, but they don’t really need it.” Liberating and true.

Don’t play a song for a child that you aren’t prepared to listen to 10,000 times.

There are many times when raising four kids that I’ve felt guilt about working nights and weekends — necessary when you’re a freelancer. But a friend of mine, a single mom of two who is a physician, told me something I remind myself of often: Putting a roof over your kids’ head is parenting, too.

“Everything can be cleaned.” Said to me by my mother when I called, overwhelmed after an explosive diaper incident. It became a mantra I repeated often through stomach bugs and mealtime tantrums.

Be kind to yourself

Being kind to yourself doesn’t make you a worse mother, partner or friend. It makes you a better version of all of those things.

Remember that when your child is playing, they are actively learning something, even if it isn’t obvious.

I told my teen daughters, if they ever needed a ride home and didn’t want to drive, to call me and say “The car won’t start,” and I would pick them up, no questions asked. Great advice from a friend. Everyone needs a safety net to get out of a situation. I never got the call, but they knew they could count on it.

A neighbor and mother of a preteen at the time told me sometimes it’s good to just take a drive together. “You never know what will come out,” she said. It’s especially good for hard conversations because you don’t have to look directly at each other. It’s a cozy space and just lends itself to sharing.

My mom told me, “Never apologize for your children’s behavior.” This blew my mind. I live in a world that tells me to make goodie bags for strangers when on a flight with my infant as a way to preemptively (and performatively) beg for forgiveness for existing in the same public space as them. But my mom is right. I deserve better than feeling anxiety and shame for being in public with my family. My children deserve better than having their mother follow them around letting everyone know that I understand that my kids are a burden.

I’m a mother of four adult kids. Two of them are disabled. One will live with me forever. I would say the very best advice I received during the hardest years was to start each day with a new fresh attitude, with energy, hope and an eye for adventure in little everyday routines. Optimism and gratitude heals a lot of disappointments.

Don’t wait until your kid is a sullen teenager to start asking about his or her day. Get them in the habit of sharing their thoughts with you in a safe environment as soon as they can express themselves; the earlier the better. That way, they’ll be much more likely to open up to you when the going gets tough and they really need someone to talk to.

“Kids are made of rubber,” I had been told many years before I became a mother. I never forgot it and when my baby son started walking, remembering this piece of wisdom served me well. My son is as clumsy as I am and falls or bumps into things very frequently. I have always taken it calmly, and he learned not to be worried or upset about it. He knows he can cry if it hurts, which he does, but he doesn’t dwell on it. And I don’t lose any sleep over every bump and bruise, nor do I waste anyone’s time going to the E.R.

Broadway theaters will continue requiring patrons to wear masks at least through June 30.