RPNEWSPAPER
Home Sports Suns have series on their hands after debacle vs. Mavericks 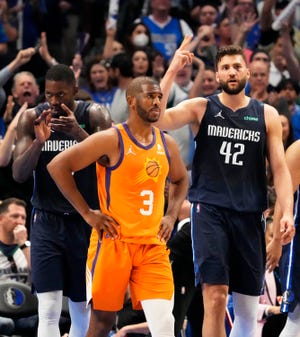 
DALLAS — Five days ago, the Suns left Phoenix with a 2-0 lead over the Mavericks and fans serenading them with chants of “Suns in Four!”

But five days in the NBA playoffs is a lifetime, and after two games and two losses at American Airlines Center, the Suns could use a lifeline.

Their defense weakened. Their offense stalled. And their 37-year-old point guard, Chris Paul, played like a 37-year-old.

The Mavericks looked like the far better team, especially in Game 4 on Sunday. They made an astounding 14-of-24 three pointers in the first half, and when the Mavs finally cooled off in the second half, the Suns were too disjointed to take advantage.

Paul’s problems were a huge reason for the 111-101 loss. He picked up his fourth foul on the last play of the first half, his fifth just 2½ minutes into the third and his sixth and last about 1:30 after entering the game in the fourth.

It was his second consecutive poor game. He followed up a performance in Game 3 that included seven turnovers, by fouling out early in the fourth quarter in Game 4, leaving with only five points.

The final two minutes of the second and third quarters were filled with the items that doomed the Suns for the entire game.

The Suns trailed by nine points with 2:21 left in the second quarter. A strong finish could have flipped the game. Instead, they missed four shots, including two wide-open 3-point attempts, and Paul picked up his fourth foul just before time expired.

The Mavericks extended their lead from nine to 12 points in that time.

The end of the third quarter following a similar pattern. They missed their last four shot and their only two points were free throws from Devin Booker.

As disastrous as this trip was for the Suns, they can overcome it. Game 5 is in Phoenix Tuesday night before a return trip to Dallas on Thursday. Winning those games is how they closed out the Pelicans in round one.

But they return home wounded, wobbling and vulnerable.