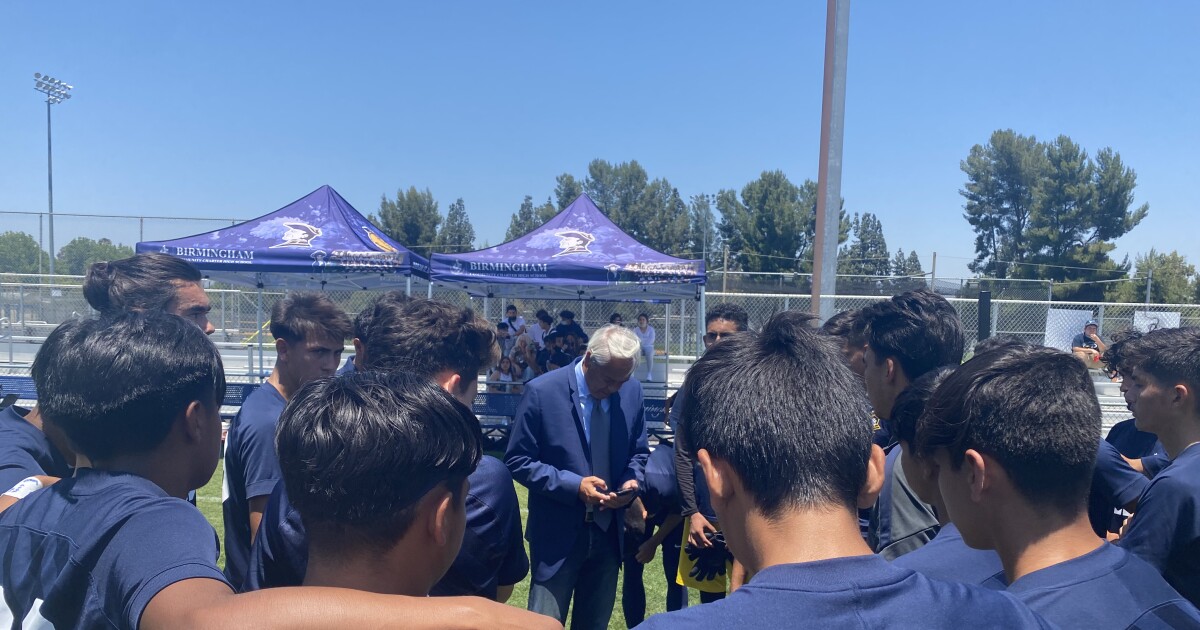 It was last summer when Lake Balboa Birmingham soccer coach EB Madha made a phone call to England to find out if his program’s star player, David Diaz, planned to return home. Diaz was spending six months playing for a club team.

“Don’t worry coach. I wouldn’t miss high school for anything,” Diaz told him.

Birmingham (18-0-1) is one win from winning the Southern California Division I regional championship after a 4-2 semifinal victory over visiting Clovis on Thursday. Diaz, who has an innate ability to kick the ball to an open teammate, had another spectacular assist to leading goal scorer Enrique Pineda, who had two goals Thursday.

Anthony Miron and Diego Nava also scored for the Patriots, who will face Southern Section Division 1 champion Mira Costa in Saturday’s 1 p.m. final at Birmingham. Mira Costa defeated Servite 1-0 in the other semifinal. Thomas Southey scored the only goal.

Harvard-Westlake 2, Villa Park 1: The Wolverines (18-0) qualified for the Division 1 girls’ regional final. They will play Garden Grove Pacifica on Saturday at home at 2 p.m.

Mira Costa 4, Foothill 3: A three-run sixth turned around the game for Mira Costa. Connor Meidroth had a two-run single to tie the score, then Ben Gneiser delivered the game-winning RBI single. Mira Costa advances to play on the road against No. 3-seeded Orange Lutheran. Thatcher Hurd picked up the victory with three innings of relief.

Damien 2, South Hills 0: Alec Beck came through with the shutout.

Corona 13, Redondo Union 4: The Panthers advance in Division 1 and will face Huntington Beach on Tuesday. Andrew Walters, Josh Springer and Danny Perez each had three hits. Ethan Schiefelbein, a freshman, improved to 8-0 on the mound.

Ayala 3, Beckman 2: Ryan Moreno’s sacrifice fly drove in the winning run in the bottom of the seventh. Cole Koniarsky hit a home run and went four for four. Paul Murrow and Zack McAlister each had three hits for Beckman.

Villa Park 4, Diamond Bar 0: Sydney Somerndike came through with a no-hitter and 19 strikeouts in the Division 2 opener.

Pacifica 3, Marina 2: Pacifica got a walk-off victory in the 11th inning.

Marina 76, Shalhevet 74: The Vikings eliminated top-seeded Shalhevet in a 3A semifinal.

US Open Round 2: Bland, Henley surprise leaders at Torrey