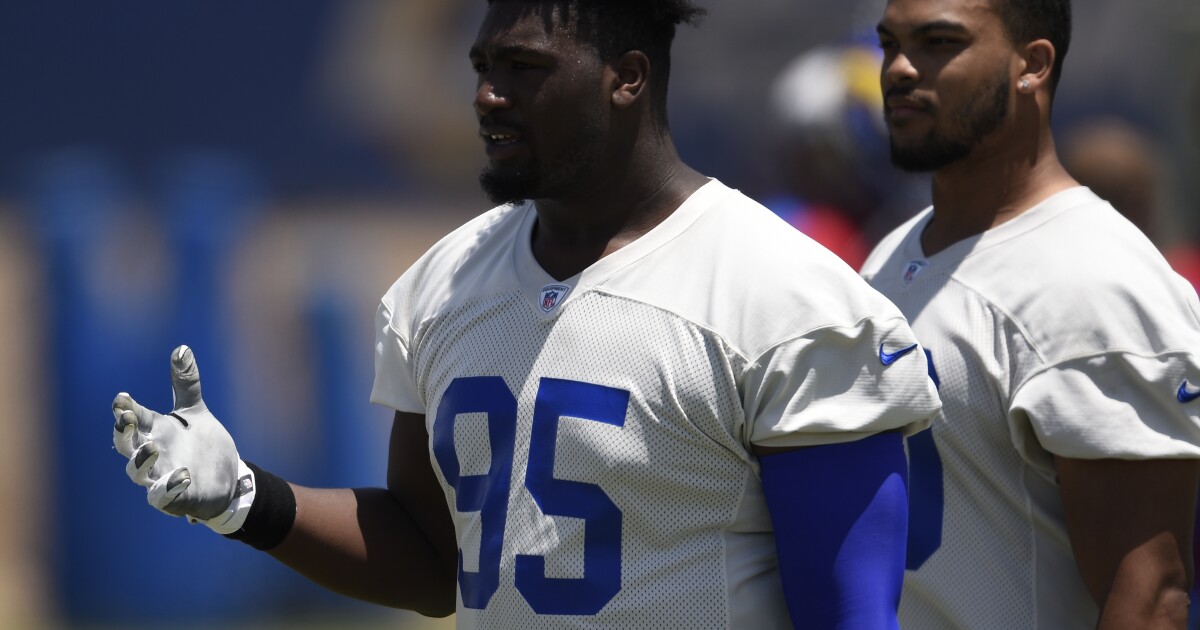 During the run-up to the NFL draft, defensive lineman Bobby Brown III and cornerback Robert Rochell got to know each other while working out at the same training facility.

The Rams selected both Brown, who played at Texas A&M, and Rochell, from Central Arkansas, in the fourth round.

The rookie teammates have spent the last few weeks working to make an impression on coach Sean McVay and his staff during organized team activity workouts. The Rams finish their offseason program next week with a three-day minicamp.

Brown and Rochell said Friday that their friendship has grown through the process.

“That’s a funny guy, man, a guy that can make you laugh all day,” Rochell said during a videoconference with reporters. “Big character, a guy that loves this game just as much me. … Just having a guy around that’s similar to me in characteristics is everything, so we enjoy the game together.”

“That’s a great guy,” he said of Rochell. “He’s got his head on right. I can’t wait to see what he’ll be able to do later on in his career because he loves football.”

Brown is trying to find a role on a remade defensive line that includes veterans such as three-time NFL defensive player of the year Aaron Donald, A’Shawn Robinson and Sebastian Joseph-Day, younger players such as Greg Gaines and fellow rookies Earnest Brown IV among others.

Rochell is part of a cornerback group that includes starters Jalen Ramsey and Darious Williams and others such as David Long.

McVay said Brown’s attention to detail during drills has caught his eye. Rochell’s movement and improvement in the last few weeks also has been noteworthy.

“Been pleased with those two young guys and looking forward to seeing them wrap it up the right way next week,” McVay said.

McVay also said that tight end Jacob Harris, a fourth-round pick from Central Florida, has stood out among rookies.

“Just his overall speed and athleticism,” McVay said of the 6-foot-5, 211-pound Harris, “you kind of feel him on the field.”

Next week’s minicamp, which concludes with a workout on Thursday before fans at SoFi Stadium, will be the final opportunity for McVay to observe and evaluate new quarterback Matthew Stafford on the field before the Rams reconvene for training camp in late July at UC Irvine.

During Friday’s workout, which was open to reporters, Stafford continued to show command of the offense.

Donald, Ramsey, Williams, receiver DeSean Jackson and tight end Tyler Higbee did not attend Friday’s workout, which was voluntary, and McVay reiterated that he had been in communication with players.

Next week’s minicamp is technically mandatory, but McVay hinted a few players might be absent with permission.

“I’ve been extremely pleased with the leadership from our veterans that have really guided an opportunity for us to get a great month of work, in person, and next week will represent the finality of that.”

Running back Darrell Henderson, who is recovering from ankle surgery, continues to work with the training staff during workouts but also has participated in some drills. McVay said he expected Henderson would be at full speed by training camp. Outside linebacker Terrell Lewis, who was sidelined part of last season because of a knee issue, attended practice but did not participate. McVay said he did not have an update on Lewis.