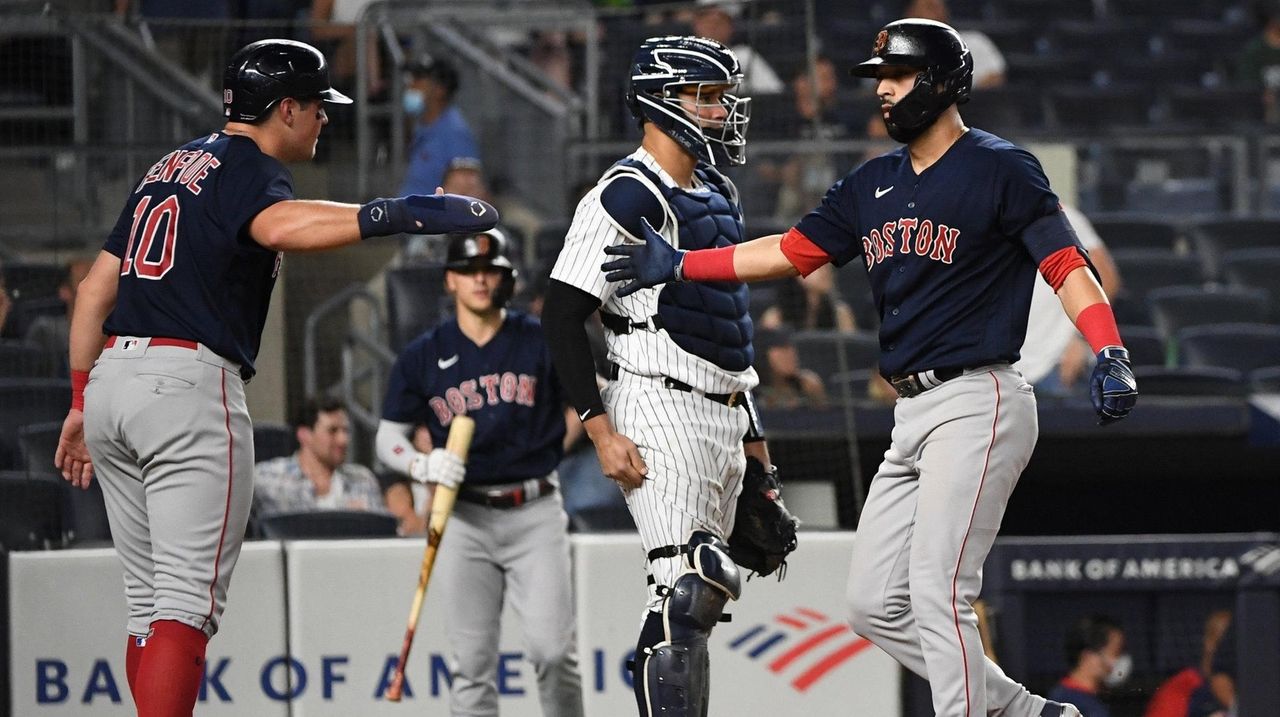 The Yankees welcomed their top two division rivals to the Bronx this week for a seven-game stretch that could be looked at as a referendum on where they stand in 2021.

Where the Yankees stand is not good — 6½ games behind Tampa Bay in the AL East after a 6-5, 10-inning loss to the Red Sox on Sunday night.

The Yankees lost five of the seven games, including all three against Boston in the Red Sox’s first three-game sweep at Yankee Stadium since 2011. They have lost 10 of 13 since a 22-8 run lifted them to 28-19.

“An awful week for us culminating in the end of this homestand,” manager Aaron Boone said. “We’ve got to get right. We’ve got to get better. It starts now on the road as we head to Minnesota.”

Said Aaron Judge: “You just keep fighting. Especially in this game. They were the better team tonight, but good things happened tonight. A lot of good at-bats, a lot of clutch at-bats in the game, guys picking each other up. So there’s a lot of positives in this game even though we didn’t get the win.”

Xander Bogaerts’ two-out, two-run single off Luis Cessa in the 10th drove in the go-ahead runs for the Red Sox after the Yankees tied the score in the bottom of the ninth on Gleyber Torres’ one-out RBI double on an 0-and-2 pitch from Matt Barnes. Aaron Judge scored from first base without a throw as Boston leftfielder Alex Verdugo had trouble digging the ball out of the corner.

The game was sent to extra innings when pinch hitter Rougned Odor was called out on strikes on a very outside curve to end the inning with runners on first and third.

Yankees third base coach Phil Nevin — who has been stationed in the dugout since his return from a serious bout with COVID-19 — was ejected by plate umpire Gabe Morales for arguing the call.

After the ejection, Nevin came out of the dugout to argue. An IV port for the treatment he continues to receive was visible on his left arm.

“I was a little worried about [Nevin] right there,” Boone said. “I was concerned for him.”

Yankees bench coach Carlos Mendoza was ejected by second base umpire Bill Miller in the 10th after leadoff batter Bobby Dalbec walked on a close 3-and-2 pitch.

Mendoza, who has been filling in for Nevin as third base coach, was replaced by first base coach Reggie Willits in the bottom of the 10th. Catching coordinator Tanner Swanson took over as first base coach.

Mendoza indicated to Miller that he hadn’t said anything (hitting coach Marcus Thames vociferously argued from the dugout). “Obviously, very frustrated,” Boone said, “and you saw some of that emotion spill over. Why [Mendoza] was thrown out was absolutely ridiculous. But that’s just . . . playing for a lot, and obviously going through a tough stretch.”

The Yankees threatened in the bottom of the 10th when Clint Frazier was hit by a pitch to join ghost runner Odor at second, but Miguel Andujar hit a comebacker for the Yankees’ third double play of the game and MLB-leading 58th of the season.

Tyler Wade’s two-out infield single made it 6-5, and he moved to second on a throwing error by second baseman Marwin Gonzalez. DJ LeMahieu (0-for-5) then hit a game-ending grounder to second.

“We’ve lost the five of seven or whatever you said,” Judge said, “but we’ve still got about 100 games [102] left in this season. What we’ve got to focus on is the bigger picture. We can’t sit here and listen to outside noise telling us that we’re this and that.”

The Yankees led 3-1 in the seventh before Gonzalez hit a two-run homer off Lucas Luetge. Boston pushed across the go-ahead run in the eighth after a key defensive mistake by the Yankees.

Pinch hitter Christian Arroyo led off the inning against Wandy Peralta with a pop fly to short rightfield that clipped the glove of LeMahieu and was scored a double.

Rightfielder Frazier stopped chasing the ball when he heard LeMahieu call for it, but the usually sure-handed LeMahieu got turned around after a long run and didn’t come close to making the catch.

Verdugo grounded to second to move the runner to third and Bogaerts followed with a long sacrifice fly to center to give the Red Sox the lead. It was the kind of situational hitting the Yankees rarely have produced this season.

Yankees starter Domingo German went 5 2⁄3 innings and left after 84 pitches with a 3-1 lead. The only run he allowed was a 446-foot home run into the right-centerfield bleachers by Verdugo, the second batter of the game.

The Yankees didn’t trail for long. In a four-batter span after LeMahieu struck out in the bottom of the first, they bunched three singles and Gary Sanchez’s two-run double to left to take a 2-1 lead against righthander Garrett Richards, but Chris Gittens and Frazier struck out to strand runners at second and third.

Anthony Rieber covers baseball, as well as the NFL, NBA and NHL, for the sports department. He has worked at Newsday since Aug. 31, 1998, and has been in his current position since July 5, 2004.