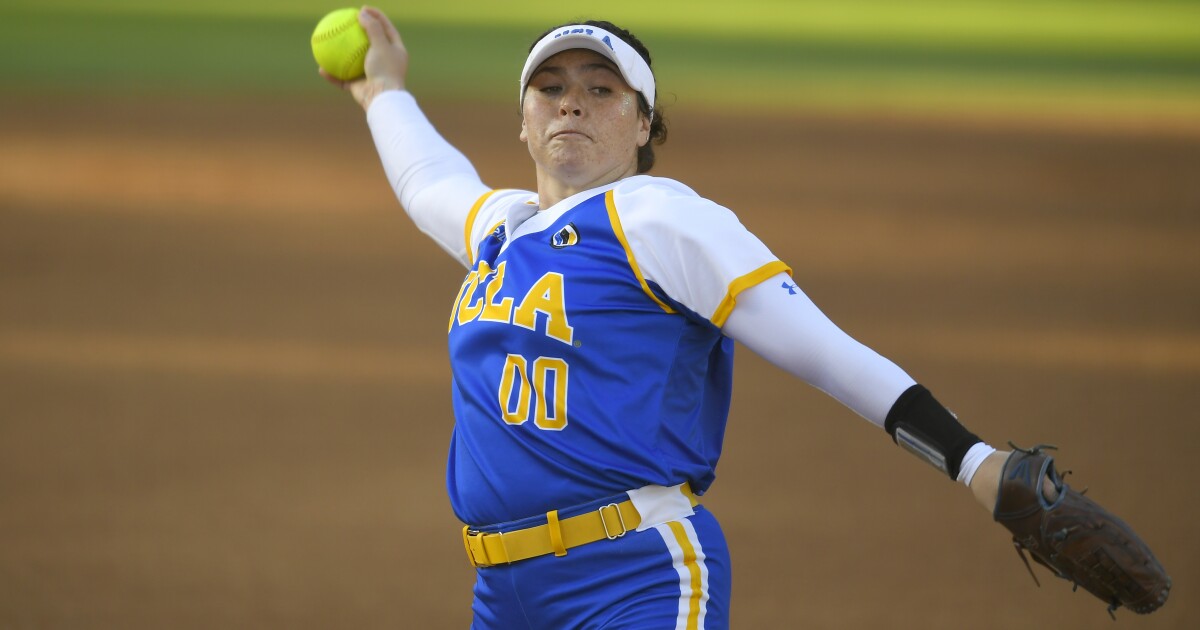 A rising star on UCLA’s elite pitching staff went down in the biggest moment of the season, but the Bruins’ longtime ace was shining as bright as ever.

With pitcher Megan Faraimo’s status for the Women’s College World Series in question because of an injured hand, Rachel Garcia pitched a shutout in Thursday’s opening round against No. 10 seed Florida State as the No. 2 Bruins came alive late for a 4-0 victory.

Garcia gave up five hits and two walks with 11 strikeouts, her seventh double-digit strikeout performance of the season.

Faraimo, who had a 19-3 record and 1.10 ERA, is day-to-day and did not travel with the team. The redshirt sophomore who earned her first NFCA first-team All-American honor this year was poised for her first significant World Series experience this season. She already starred for the Bruins in the postseason by pitching a shutout in a must-win Game 2 of the super regional after UCLA dropped the first game of the series.

Losing a significant piece of their pitching staff that ranks second nationally in ERA didn’t rattle the Bruins, who had no reservations about turning to their redshirt senior who previously carried them to the 2019 NCAA title.

Garcia allowed at least one base runner during each of the first four innings as the Seminoles put balls in play to test the UCLA defense. Catcher Alyssa Garcia backed her pitcher up by throwing Kaley Mudge out at second on a stolen base attempt in the first inning and second baseman Anna Vines added a diving stop in the third.

Vines, the No. 9 hitter, then broke the scoreboard stalemate in the bottom of the fifth, chopping a single up the middle and beating the throw to first while Kinsley Washington scored from second by sliding home.

Vines was making her World Series debut. The redshirt sophomore watched the Bruins win the 2019 championship from the bench as a freshman, but she never stepped on the field. With an announced attendance of 10,126 during the night session, Vines and the Bruins fed off the energy of the largest crowd they had seed in more than two years.

“We talked about this all year. This was our goal,” said Vines, who was two-for-two with an RBI single.

Because last season’s World Series was canceled amid the COVID-19 pandemic, about half of UCLA’s roster had never played on such a high-profile stage. Rookies made big impacts as all four of UCLA’s RBI came from players making their WCWS debuts.

Delanie Wisz, a transfer from Loyola Marymount, hit an RBI double in the sixth inning to give the Bruins breathing room and redshirt freshman Maya Brady launched a two-run homer in the frame.

Brady had struck out her first two at-bats, but recovered to hit her third home run in as many games and her 14th of the season, which ties her for the team lead.

“Every single one of my hitters made an adjustment tonight so I’m really proud,” UCLA coach Kelly Inouye-Perez said. “I think that’s the strength of our team. … But for those new Bruins, we said this, we’re here to create memories and those are some pretty special memories for those girls being here for the first time in Oklahoma City.”