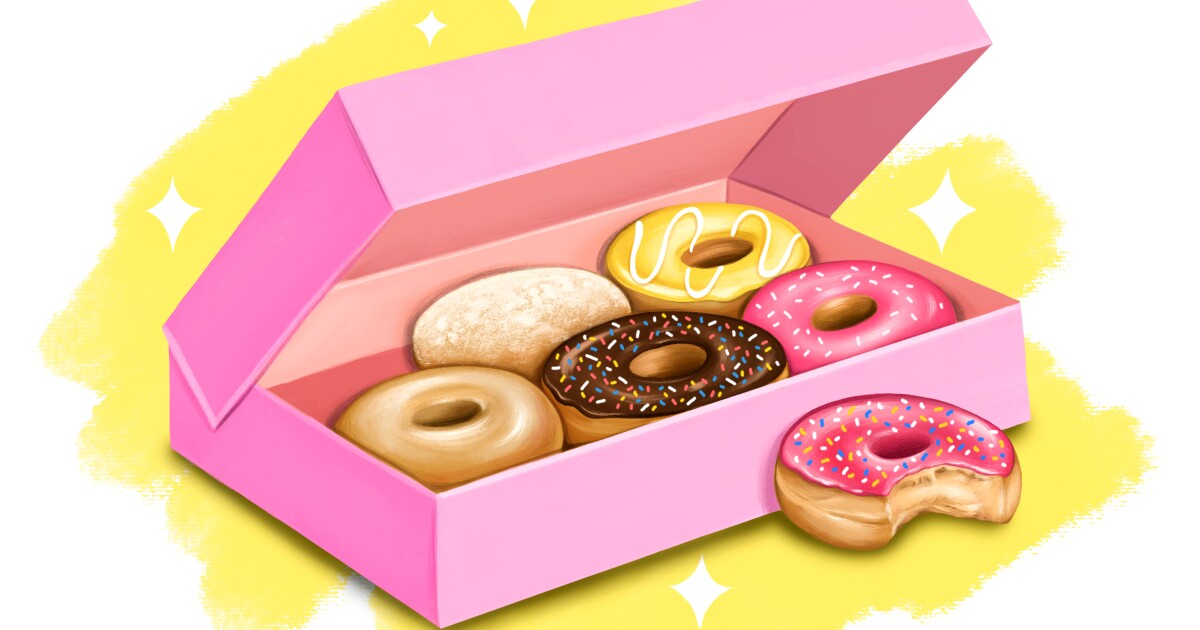 Why do so many SoCal doughnut shops use pink boxes?

Tiffany & Co. has boxes of robin’s-egg blue. French fashion house Hermès uses a signature shade of orange, and Christian Louboutin’s heels are instantly identified with the flash of a red sole.

Across Southern California, what do we have? That would be carnation-pink boxes, which certainly mean the contents are doughnuts from an independent bakery. We’ve been thinking a lot about those pink boxes lately, probably because the doughnut Friday tradition organized by a handful of co-workers is one of the few things we miss about the in-office environment. When a Pepto Bismol-pink package landed on the counter in pre-pandemic times, the sugar rush wasn’t far behind. Why do so many L.A.-area doughnut shops prefer this particular hue?

It turns out we’re not the first to ponder this peculiarity. David Pierson, a colleague who tackled the topic in 2017, credits the Southland’s Cambodian-American community with inextricably linking the cotton-candy color to mom-and-pop doughnut-shop boxes, tracing the origins to two entrepreneurs in particular: Cambodian refugee and doughnut king Ted Ngoy (the “g” is silent) and then-protégé Ning Yen.

No one recalls which of the two men (or if it was both) is ultimately responsible for the color choice. However, Peter Yen, Ning Yen’s son and manager of the bakery supply company Santa Ana Packaging, knows why it happened in the early 1980s.

“There are two reasons,” Yen says. “First was the cost. They were less expensive than white boxes. Second, they originally wanted red boxes. Red is good luck in Chinese culture, and a lot of the Cambodians that were coming [to the U.S.] at the time were Chinese-Cambodians. They asked for red boxes but they ended up being pink for some reason.”

What was first embraced by the Cambodian American-run doughnut shops became the box color of choice far beyond. Yen says La Mirada, Calif.-based Santa Ana Packaging sees the penchant for pink strongest across California, Arizona and parts of the Pacific Northwest. While the color is still popular, there’s been a noticeable shift as a younger, social media-savvy generation begins to take the helm at the mom-and-pop shops.

“They wanted branded boxes,” Yen said. “Some of them want pink, but they want them fully logoed. That’s more important than the color. They want something that will stand out on Instagram.”