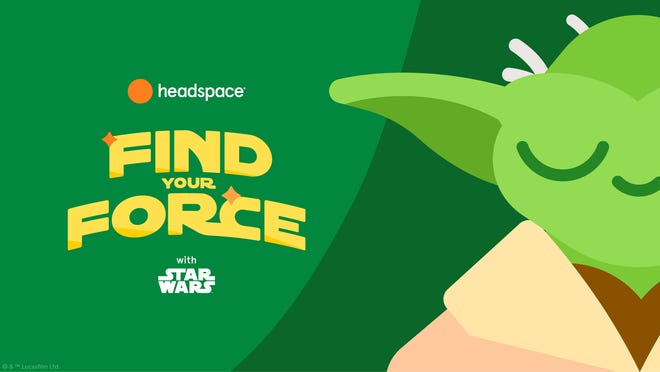 
Here’s a new way to celebrate Star Wars Day: Become one with the meditative force.

To help you on that mission, meditation and mindfulness app Headspace has teamed with Lucasfilm to create special content to coincide with the unofficial Star Wars holiday on May the 4th – the date arises from a line of dialogue in the first movie released in George Lucas’ space saga, “Star Wars: A New Hope.”

Even if you are Padawan when it comes to meditation, Headspace has several new Star Wars-themed breathing exercises for you to try. Each is led by an iconic character such as Yoda, R2D2, Chewbacca or BB-8.

The breathing exercises are accompanied by a peaceful animation of each character’s breathing, along with relaxing music and sound effects.

And if the dark side is keeping you from a restful night of sleep, Headspace also has three Star Wars-themed “sleepcasts” to help you doze off. You can take a mental trip to a Star Wars planet such as Tatooine or the Islands of Ahch-To (home of Luke Skywalker’s Jedi Temple) or embark on an X-Wing voyage.

“The new content encourages members to turn inward and focus on breathing to help center users in the moment to reduce stress and motivate greater concentration,” Headspace said in a press release announcing the Star Wars-themed features.

How a Trash-Talking Crypto Bro Caused a $40 Billion Crash