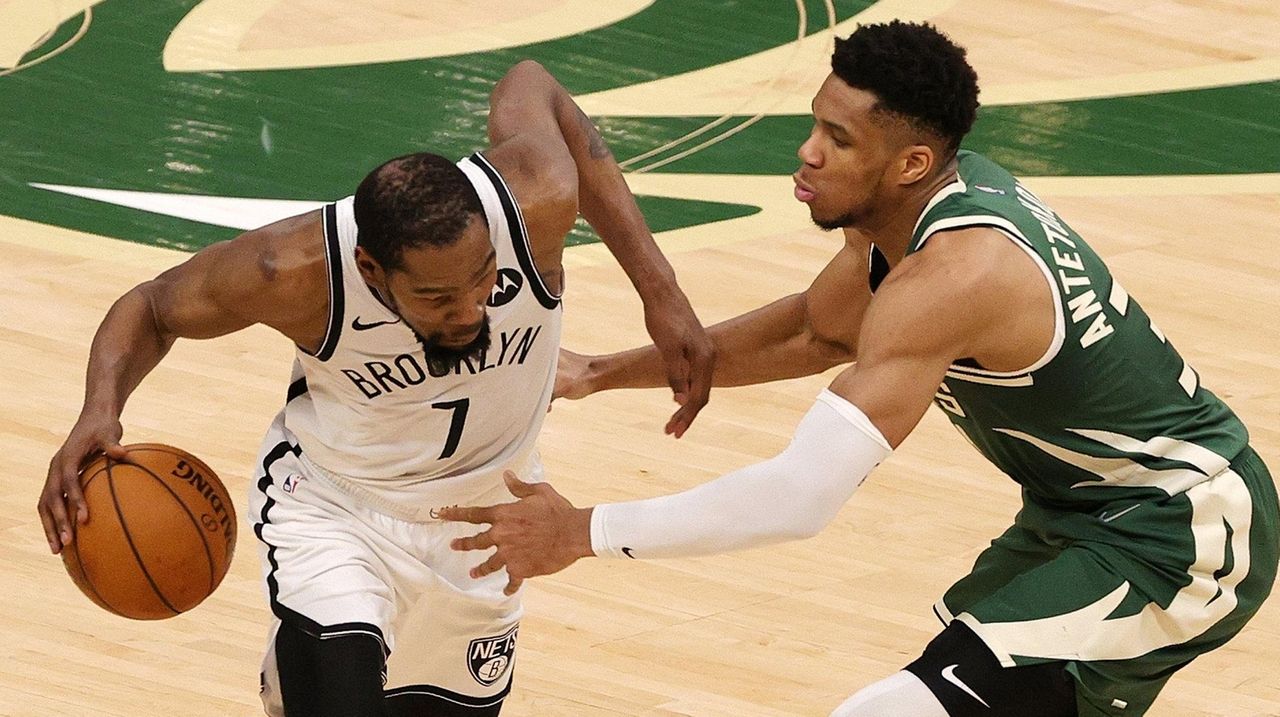 There was a solar eclipse visible along the eastern seaboard Thursday morning, a rare and beautiful occurrence. And then about 12 hours later there was maybe an equally rare, but horrifically ugly, unnatural event — as two of the best offensive teams the NBA has seen combined to set the league back decades.

Jeff Van Gundy, who treasured these sort of games with the scoring in the 80s when he was coaching the Knicks, now as he was serving an analyst called it a rock fight as he tried to come to terms with what he was seeing. The 86-83 Bucks victory over the Nets in Game 3 carried little of the allure of a street fight that Van Gundy’s teams once engaged in, instead resembling a pickup game with weekend warriors confidently launching bricks.

And in that ugly showing, the Nets can gain some measure of confidence. Not in their own performance – there was little to like about that. Instead, the Nets could take solace in the knowledge that like an eclipse, they almost certainly won’t see that happen again in this series.

Even with James Harden on the sidelines again, the Nets have been unstoppable with Kevin Durant and Kyrie Irving easily getting anything they want against the Milwaukee defense. Even as they struggled Thursday, it was hard to picture it happening again.

The Nets scored 11 points in the first quarter. And they might have been worse in the fourth quarter. Irving hit a pair of shots in the first 64 seconds of the fourth quarter and never scored again, taking just three more shots. Other than a breakaway dunk by Bruce Brown midway through the fourth, no player on the Nets except Durant scored a point in the final 10 minutes of the game. Other than Durant, the Nets combined to shoot 3-for-15 in the quarter, missing 14 of their final 15 shots. The Nets shot 34-for-94 overall (36.2%), and 8-for-32 on three-pointers (25%).

Durant shot just 2-for-10 in the first half but recovered to carry the Nets through the second half, finishing with 30 points. But even if he was the one to make shots, he wasn’t counting on this anomaly being impossible to see again if the Nets didn’t approach Sunday’s Game 4 differently.

What the Nets can expect is that the right players will take them. Durant hit three consecutive jumpers — a pair of mid-range shots to tie the score and then a three to put them in front, 83-80 – down the stretch. But after that last shot with 1:23 to play, Durant didn’t get a shot again until a desperation three as time expired.

The Nets have had contributions up and down the roster. But those shots from the ancillary pieces are much easier to make when the Nets are up 30 than when they are trying to match baskets in the final minute of a playoff game.

Joe Harris misfired on a wide-open jumper with 52.8 seconds left, dropping him to 1-for-11 on the night. That likely won’t happen again. And maybe Bruce Brown doesn’t miss the 14-footer or the drive that he misfired on in the final 30 seconds. But on a team with Durant and Irving, maybe they aren’t the ones who should be taking those shots.

Irving missed a three with 4:22 remaining and never attempted a shot again.

“You can always go back and look at a game and be like, would have liked this player to shoot or whatever it may be,” Nets coach Steve Nash said. “But in the moment I thought we still were able to create some good opportunities, very makeable opportunities. If you look at it, only one or two buckets in the last three or four minutes that we needed to fall and they just didn’t. I thought we had plenty of opportunities.

“Now, would I want Kevin or Ky shooting every single ball? Of course, but that’s not always the way it works out. We can learn from it. We can grow. We got good looks at times that just didn’t go in for us. It was an uncharacteristic night in that respect but also a night that is a new experience for us, on the road and against an elite team in a hostile environment.”

Maybe it is a rare event that won’t happen again. And maybe those lessons are learned. Sunday, back in Milwaukee again, will be a time to test that.