RPNEWSPAPER
Home Opinion Opinion | What Does Listening to Air Raid Sirens for 300 Hours... 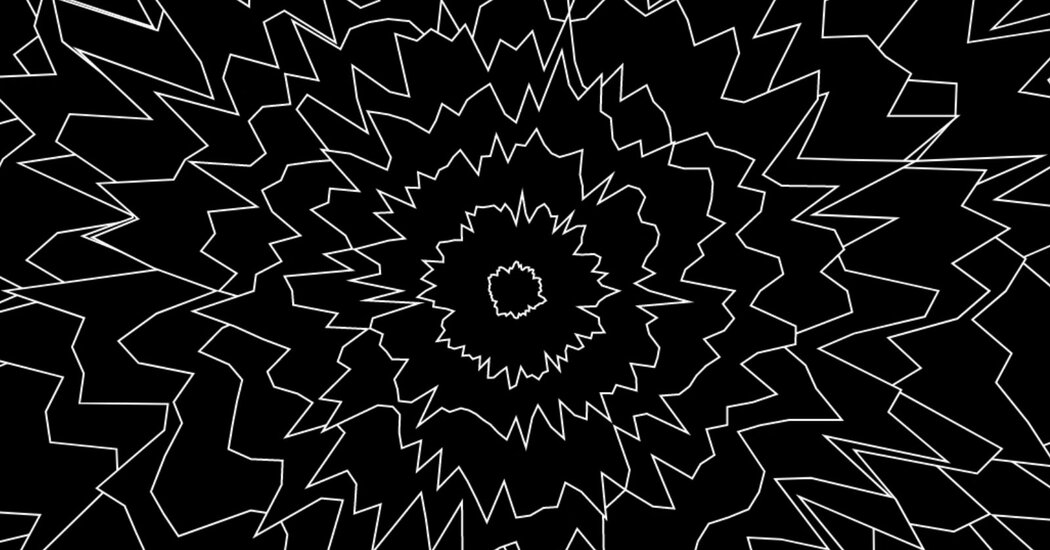 Mr. Deresh is a Ukrainian novelist.

I heard the first sounds of sirens in Kyiv on Feb. 24 around 7 in the morning.

At 5:35 a.m. that day, my mom called me from a small town near Lviv and told me war had broken out. Outside, there was one explosion and then another; they sounded like the volleys of distant fireworks. I woke up my wife, and we started frantically scrolling through Facebook, looking for information about what was going on until we finally figured out that the explosions we were hearing were from Kyiv’s antiaircraft guns.

When the gray started creeping across the sky, I heard the next explosion. The panes in the windows rattled, car alarms on the street went off, and clouds of frightened ravens lifted into the air. Right then, I heard an air raid siren from the neighboring district. Drawn out and monotone, it echoed over the city for miles around, heralding the start of a new reality.

Today these sirens have become part of a daily routine for life in Kyiv. You hear them in the morning, evening and even Easter night. The initial sense of the irrationality, the impossibility of this war has gradually been extinguished. After two months of resistance, Ukrainians are getting used to the fact that the world will no longer be as it was. For me, the always unexpected, piercing sound of the sirens amid seemingly peaceful life in the capital has become the irrational symbol of this new way of being, which we must react to not only to preserve our lives but also to understand and examine.

But on that first morning of the war, we had no time to think about symbolism. My wife and I, like millions of Ukrainians across the country, were asking a series of basic questions of a simultaneously practical and existential character that we all had to quickly answer: What next? Go or stay? Stock up on food or join the army?

We stayed. First, we taped X’s across all the windows in our apartment to reduce the potential spray of broken glass if there was an explosion nearby. The government asked us to seek cover in the case of additional air raids, but when I walked around the neighborhood looking for a hiding place, I discovered that the shelter at the school next door was already overcrowded with women and children and that the basement of our nine-story building left something to be desired.

After weighing our options, we decided to remain in our apartment during the sirens and put our faith in the rule of two walls: the idea is that while under threat, you need to hide somewhere that is protected by at least two barriers. The first wall takes the full force of the blast, and the second protects you from fragments of the wall, glass, etc. Hallways and bathrooms, as many Kyivans discovered, are wonderful places to set up a dining room, office or bedroom set.

Still, plenty of Kyivans did as the city administration recommended and sought shelter from every air raid — for example, in the metro. On the first day of the war, my buddy Stanislav, a successful Ukrainian graphic designer, and his wife, Olena, packed their emergency bags and got ready to go into the metro at the next siren. That night, they decided to sleep in their apartment but dressed in their winter coats and boots, with their legs hanging off the side of the couch, so they could get to safety as quickly as possible.

When the sirens started up again in the middle of the night, they went down into the station near their building. “When we left home with two small suitcases and backpacks, I had a strong sense of detachment and understanding that we might never return,” Stanislav told me. “Despite the fact that we left all our belongings, we weren’t hysterical. We were calm and full of acceptance. There was a sense of the scale and universality of these events that had begun taking place in Ukraine.”

That first day, I remember that the sirens went off in Kyiv twice. But, as quickly became clear, they couldn’t be heard equally well in all districts. Kyiv’s air raid notification system was built decades ago, under the Soviets. Before the war, the city government had planned to replace the old analog system with a digital one but wasn’t fast enough. There are about 150 sirens in Kyiv, but they don’t nearly cover the entire city.

To better inform the citizens about air raids, a few additional sources of information popped up in the first days of the full-scale invasion. Notifications of air raids in Kyiv are now posted on the official Telegram channel of the Kyiv City State Administration and sent via text message from State Emergency Services. Just a few days after the war started, an app was developed for smartphones called Air Alarm, which imitates the sound of a siren very accurately (and very loudly) if you’re in danger.

The neighborhood where my wife and I live is on the edge of Kyiv, and the sirens there aren’t very loud, so I tried downloading this app. However, the first time it went off, it scared my wife so badly — it was basically like installing a siren in our apartment — that I immediately deleted Air Alarm from my phone. 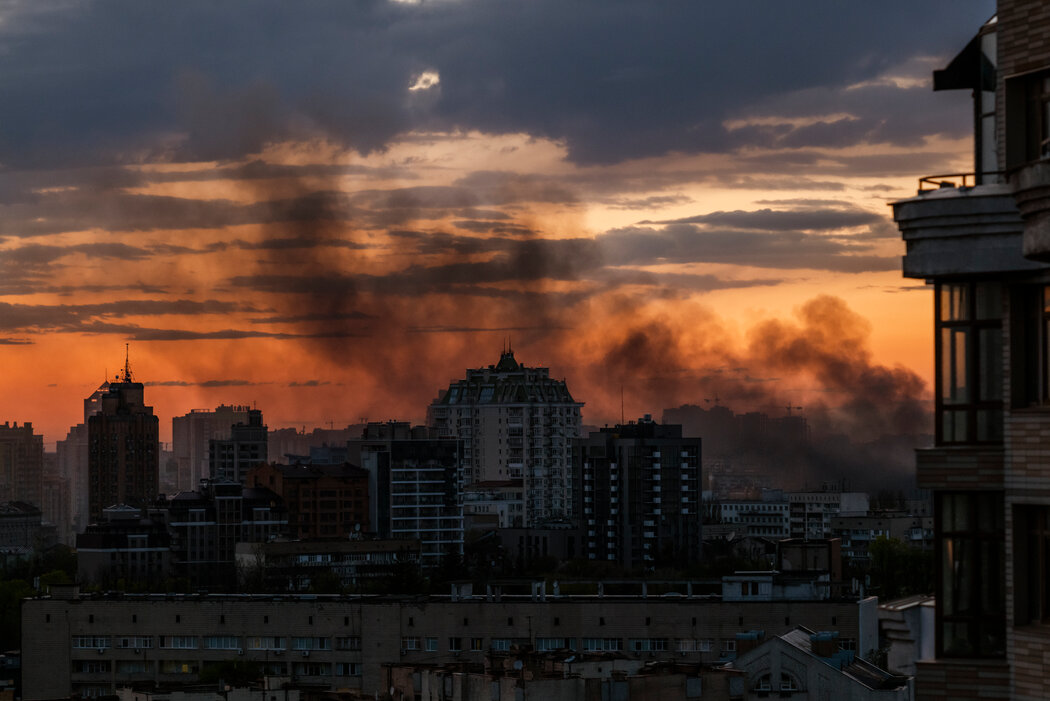 Smoke rises across the Kyiv skyline from the site of a missile strike on April 28.

The far-off sounds of sirens that you can’t always be sure you heard have probably contributed to the phantom siren syndrome that many urban Ukrainians now suffer from. This is the strange effect (exacerbated by the nighttime quiet) when you cannot say for certain whether you hear a siren or it’s just in your imagination.

As the air attack on Kyiv let up last month, a new type of adaptation to the sirens emerged. Since Russia invaded on Feb. 24, the air raid sirens in Kyiv have gone off more than 300 times. In this time, Ukrainians, Kyivans especially, have undergone serious changes in how they perceive the sirens: Our psyches, in losing the ability to react quickly to stress, have acquired their own armor, and the acuity of perceiving danger has been dulled.

After living in the metro for almost a week without once emerging, Stanislav and Olena finally decided to go home. Then they went down into the metro only during the extended curfews, and they eventually stopped doing even this, limiting themselves to taking chairs and stepping into their building’s hallway when the sirens went off.

A few brave souls have taken deliberate risks to protest the brutal reality of Russian aggression. Scenes of Alex Pian performing fragments of Hans Zimmer’s composition “Time” to the wail of sirens at an unprotected, outdoor piano in front of Lviv’s central train station have become famous. Ignoring sirens in cities farther from the front line — Lviv, Ivano-Frankivsk or Vinnytsia, say — has become practically normal. Despite the sounds of an air raid, people continue on their walks, often with children and strollers. However, the missile attack on Lviv on April 18, which resulted in the deaths of seven people, proves that ignoring the sirens is still extremely risky.

Every morning that an air raid is announced in the city, it is impossible to rid yourself of a feeling of dread, as though you are waiting for the results of some evil lottery. The Ukrainian notification system is incapable of identifying in advance just where the enemy’s ballistic missiles are headed; it can only guess at their direction. In other words, everyone is under threat. This feeling of Russian roulette was perfectly captured by the Ukrainian writer Victoria Amelina in these lines: “An air raid across the country / each time like going to everyone’s / execution / yet they aim at only one.”

Stanislav told me he has a favorite anonymous artwork that gives him strength during this Russian invasion. It is a collage that includes a World War II photo of a column of teary-eyed Jewish women being led to a concentration camp. Also in the collage is a contemporary photo showing smiling Israeli women in full battle gear with helmets and weapons. “The history lesson has been learned,” he said.

When I asked Stanislav what he thinks of the Kyiv sirens, he said that they remind him of contemporary Israel and then of those pictures that show history’s lessons being learned. The sirens in our cities are no less than a school bell calling all of Ukraine to today’s lesson.

I thought about this strange metaphor for a long time. I believe it captures the essence of what it means to hear an air raid siren in the capital of a European city in the 21st century. This is the bell for our history lesson. Ukrainians are learning this lesson now, but perhaps soon we’ll share our blood-earned knowledge with others.