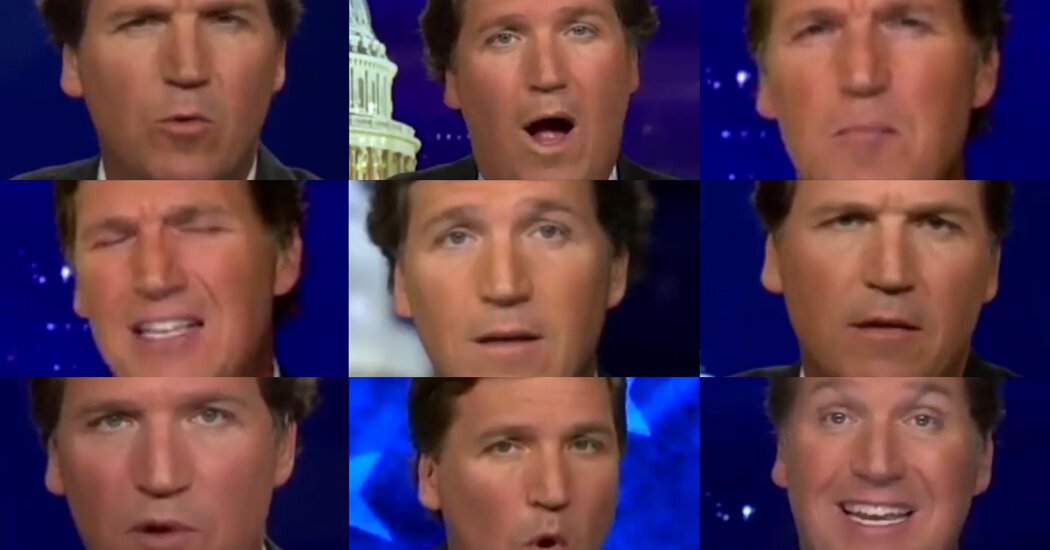 Congratulations to The New York Times for an exceptional piece of journalism exposing Tucker Carlson for what he is — an insidious infection coursing through the veins of America.

It’s been said that the demise of America will come not from without but from within. We have survived Father Coughlin, Joseph McCarthy and others like them.

Fortunately there are more people in America like Mister Rogers than Tucker Carlson.

Has The Times learned nothing at all from the election of the former guy? The amount of free publicity given to him by The Times as well as other mainstream media helped propel him to the presidency. Now you are giving free publicity to a Fox News host.

Have you never heard the saying “There’s no such thing as bad publicity”? I haven’t read a word of any of your articles about Tucker Carlson because I won’t spend a moment of my life to learn more about this awful person. Stop offering him what he wants more than anything: attention.

Is Tucker Carlson the problem, or is it the number of insecure Americans willing to accept and act upon his divisive, hate-filled and false commentaries?

He is not going away. He will only get stronger.

Tucker Carlson: laughing all the way to the bank. His audience: cheering like never before. Fox: loving it. Republicans in Congress: Tucker for president. Vladimir Putin to his P.R. goons: Write down everything Tucker says.

Earth to The New York Times and my fellow blue state people: Stop whining. We know he’s an evil genius, a master of propaganda, a liar and a con man. There’s a word for that. It’s called politics.

The issue is not how awful this guy is. It’s what the Democrats are going to do to respond in kind with their own evil geniuses.

Tucker Carlson is smart, he’s funny and he speaks in compound sentences. That’s why he has more than three million viewers. You just gave him another million.

On Sunday I was surprised to see a front-page story on Tucker Carlson. I was stunned that it continued inside for several pages, with an additional exhaustive feature on his show’s content. Surprisingly, I read it all. I almost never watch Fox News, so I attributed my attention to the know-thine-enemy factor.

I just opened Monday’s Times. There he is again. Yikes! Tuckered out, I’m flipping straight to Sports.

J.D. Vance’s Victory, With an Assist From Trump

Re “With Trump’s Nod, Vance Rallies to Win Senate Primary in Ohio” (front page, May 4):

Donald Trump and his minions have turned our political system into a twisted version of “The Apprentice,” where the path to elected office begins with a trip to Mar-a-Lago to kiss Mr. Trump’s ring.

In Ohio, J.D. Vance is the latest beneficiary of this deranged process, despite his previous “Never Trump” position. We know that many Republicans privately view Mr. Trump with contempt and understand the danger of his norm-busting antics, yet they continue to sacrifice their values to worship at the altar of Trump. Republicans appear willing to do and say anything to grab and hold onto power, no matter the costs to the country.

Who could have imagined some Republicans praising Russia’s aggression, or railing against free trade, a generation ago? We are well on our way to minority rule in this country, and Democrats still play by rules that don’t seem to apply to Republicans any longer. It’s time to get rid of the filibuster so Democrats can make the most of what little power they have left.

I can’t help but think that the newsworthiness of this information pales in comparison to the potential harm that its disclosure will cause.

The U.S. is trying very hard to avoid direct involvement in the Russia-Ukraine war and the repercussions that Vladimir Putin would insist on enacting against it. Helping cause the deaths of Russian generals could certainly be perceived as having crossed that line.

Does The New York Times take that into consideration when releasing such information?

If Madison Were Omar …

Re “Police Accuse Lawmaker of Trying to Fly With Gun” (news article, April 27), about Representative Madison Cawthorn trying to bring a gun through airport security:

Instead of this ultraright white man, imagine this story being about another professional American man, this one with swarthy skin and named Omar, who was twice caught trying to bring a loaded gun onto a commercial flight. Wouldn’t that guy be put on the no-fly list?