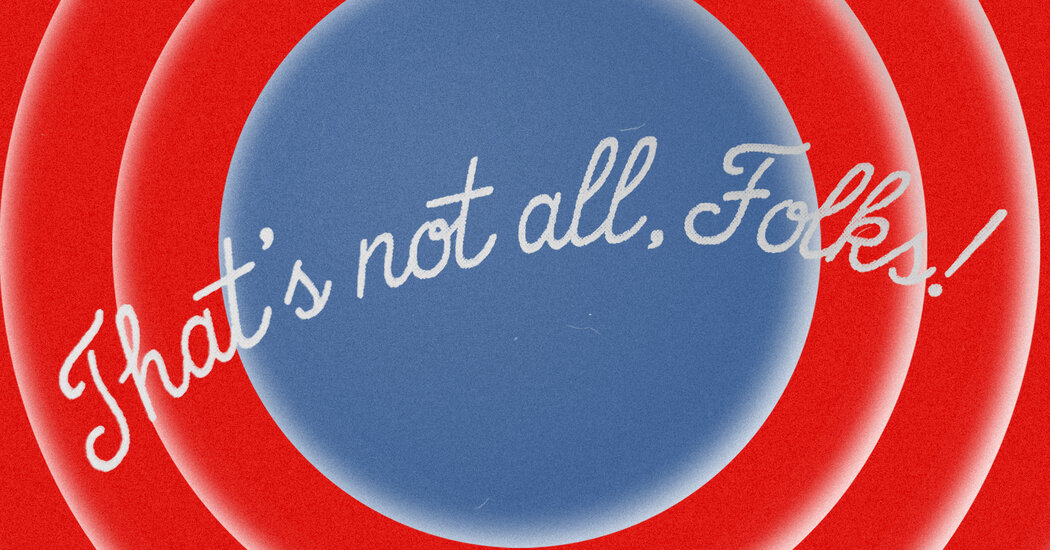 By now you’ve probably guessed that I rank Warner Bros. cartoons as the all-time best. But lately, I’ve thought that they might have some competition: The shorts Disney has been making since 2013. My girls and I call them “Funny Mickeys,” in contrast to Disney’s old shorts, which are expertly animated but, especially by contemporary standards, not narratively engaging. An isolated drawing from “Mr. Duck Steps Out,” for example, hangs on my wall at home and is a nice image of Donald Duck adjusting his hat in preparation for a date. But the cartoon itself, from 1940, just sits there — the liveliest thing is that Donald and Daisy Duck do some dancing. In the newer Disney cartoons, the characters are as laugh-out-loud funny as the Looney Tunes characters have been all along.

The artwork is great, too: The updated Disney characters are drawn in a style saluting the original late-1920s, early-1930s versions of the characters, while the backgrounds are gorgeous paintings reminiscent of the ones in Disney classics like “Sleeping Beauty.” But now, the Disney characters have a chance to engage in the same lively wordplay as the Looney Tunes characters, with nearly as much wit. Chris Diamantopoulos is especially good voicing Mickey, wangling the mouse’s classic falsetto into colors and shades that somehow convey a whole soul rather than just a squeaking, two-dimensional protagonist.

The Funny Mickeys come with a modern ethos, eschewing the old-school stereotypes found in earlier cartoons. When one of these new shorts is set in a different country, instead of wallowing in silly false-translation jokes, as the old Looney Tunes did (French people fleeing Pepé Le Pew, yelling “Le Pew!”), the characters speak the local language — French, Spanish, Italian, Portuguese, Dutch, Mandarin, Korean, Turkish and Hindi, so far. In “Mumbai Madness,” the series’ composer, Christopher Willis, wrote Bollywood-esque music.

Another great thing about these newer shorts is that they revel in the weight of the 20th century’s trove of pop culture references: They mine the Disney heritage itself, from the Disney version of “The Big Bad Wolf” to Ursula from “The Little Mermaid.” In one short, Mickey and Minnie cavort to a 1930’s-style love song, “As Long as I’m With You,” camping it up rather than just doing it straight. Another takes on the quaint ambition of a “Jetsons”-like vision of the future.

Willis, whose work is brilliant, seems to have a fondness, where thematically appropriate, for the teasing soft-rock feel of 1970s and 1980s shows such as “The Love Boat” (try, for example, the nautical scenes from “Captain Donald”). Between this, the facial expressions that often seem to channel the weird, densely detailed close-ups of cartoons from the Fleischer studio that created Betty Boop and Popeye, and the whiz-bang pacing familiar from “Ren & Stimpy,” these shorts exist in a kind of otherworldly combination of now and before, the way a good cartoon should.

I’ve been forced to rethink my own sense of what belongs on “Best Of” lists: I remain a Looney Tunes loyalist, but the new Disney shorts strike me, often, as some of the best cartoons I’ve ever encountered. They helped me through the pandemic lockdown, are great for taking a load off the mind now, and should be known better than they seem to be.