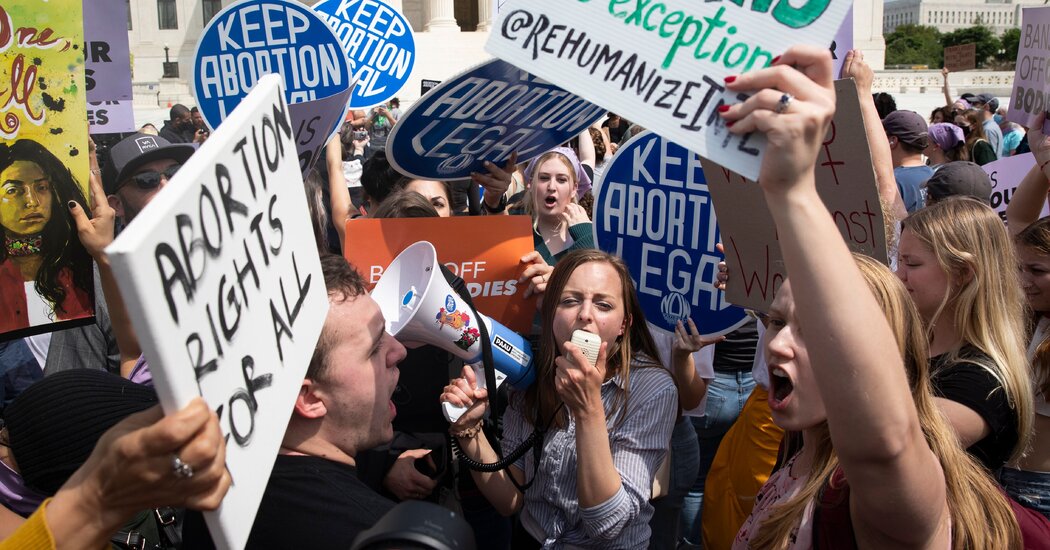 
In his draft opinion overturning Roe v. Wade, Justice Samuel Alito blamed that 1973 abortion decision for sparking “a national controversy that has embittered our political culture for a half century.” He quoted Justice Antonin Scalia: “Roe fanned into life an issue that has inflamed our national politics in general, and has obscured with its smoke the selection of justices to this court in particular, ever since.”

As a matter of history, the idea that Roe ignited America’s culture wars is, at best, a distortion. The 7-2 decision was not nearly as politically divisive when it was decided as it is today. Catholics opposed it, but many conservative evangelicals did not; the Southern Baptist Convention passed a resolution calling for legal abortion in some circumstances in 1971, and then reaffirmed it in 1974. As the Dartmouth historian Randall Balmer has argued, evangelical leaders didn’t seize on Roe until the contemporary religious right began to coalesce at the end of the 1970s, largely in response to the I.R.S. stripping segregated Christian schools of their tax exemptions.

But even if Roe had let loose the forces ripping this country apart, its end still wouldn’t bring détente. Instead, the demise of Roe will exacerbate America’s antagonisms, creating more furious legal rifts between states than we’ve seen in modern times.

“If you think it’s polarized now, you haven’t seen anything yet,” said Mary Ziegler, a visiting professor at Harvard Law School and author of the forthcoming book “Dollars for Life: The Anti-Abortion Movement and the Fall of the Republican Establishment.”

Very soon, if the Supreme Court really discards Roe and Planned Parenthood v. Casey, the 1992 decision partly upholding it, we will have two wildly different abortion regimes in this country. About half of states are expected to mostly prohibit abortion; according to the Guttmacher Institute, in 11 states there won’t even be exemptions for rape and incest. A bill moving through the Louisiana Legislature would allow prosecutors to charge those having abortions with homicide.

Blue states, meanwhile, are setting themselves as abortion sanctuaries. Oregon lawmakers recently passed a bill to create a $15 million fund to help cover abortion costs, including for those traveling to the state for the procedure. Something similar is in the works in California. Abortion clinics in Illinois, bordered by several states where abortion is likely to be made illegal, are preparing for a huge influx of patients.

The right won’t be content to watch liberal states try to undermine abortion bans. As the draft of a forthcoming article in The Columbia Law Review puts it, “overturning Roe and Casey will create a novel world of complicated, interjurisdictional legal conflicts over abortion. Instead of creating stability and certainty, it will lead to profound confusion because advocates on all sides of the abortion controversy will not stop at state borders in their efforts to apply their policies as broadly as possible.”

Already, a Missouri lawmaker introduced a measure that would let private citizens sue anyone who helps a Missouri resident get an out-of-state abortion. More such proposals will probably follow. Under a Texas law passed last year, people in other states sending abortion pills through the mail to Texas residents could be extradited to face felony charges, though the authorities in liberal states are unlikely to cooperate.

In anticipation of such legislation, Connecticut just passed a law meant to shield doctors and patients. Among other things, it ensures that no one can be extradited to another state for performing or obtaining an abortion that’s legal in Connecticut, and ensures that people sued under a law like the one proposed in Missouri could countersue to recover their costs.

Experts don’t know how these kinds of interstate battles are going to play out because there’s so little precedent for them. If you’re searching for close parallels, said Ziegler, “you’re looking at fugitive slave cases, because there are not many times in history when states are trying to tell other states what to do in this way.” The point is not that abortion bans are comparable to slavery in a moral sense, but that they create potentially irreconcilable legal frameworks.

Conservatives, of course, have a plan for reconciling clashing abortion laws — a federal abortion ban. Speaking to NBC News this week, Senator Kevin Cramer of North Dakota said he was concerned about women traveling across state lines to get abortions. “I don’t find a lot of solace in that just because it didn’t happen in my state,” he said. “So yeah, I think you could expect that pro-life activists would push for federal protections.” According to The Washington Post, Joni Ernst, a Republican senator from Iowa, plans to introduce a bill to ban abortion after six weeks.

It won’t pass as long as Democrats are in control, but at some point, there will almost certainly be a Republican president and a Republican Congress. It’s easy to imagine conservative activists demanding that their leaders jettison the filibuster in order to push through a national abortion ban. It’s hard to imagine the Republican senators who’ve defended the filibuster putting procedural principle above one of their base’s most cherished goals.

But long before we get there, the death of Roe will intensify our national animus, turning red states and blue into mutually hostile legal territories. You think we hate each other now? Just wait until the new round of lawsuits start.