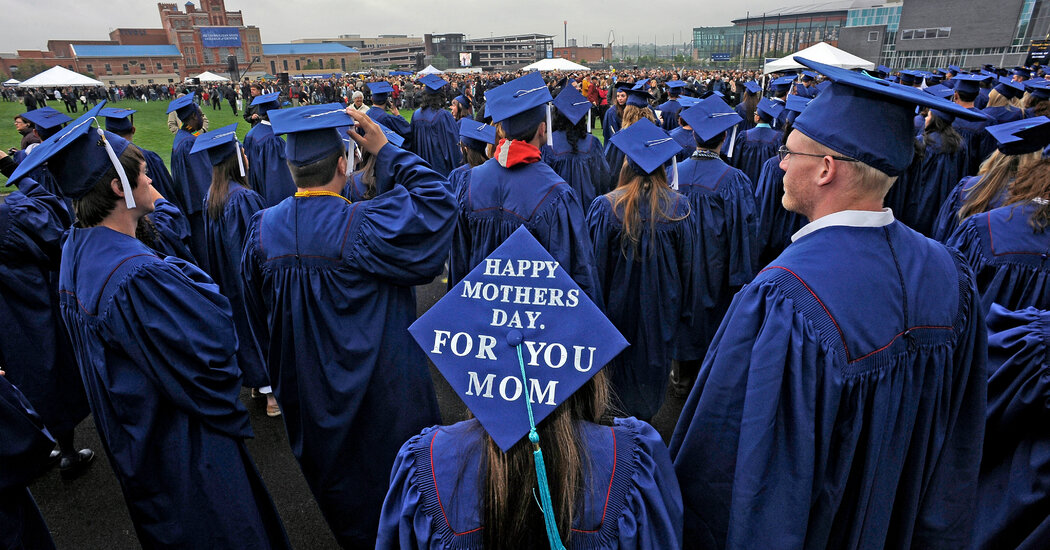 
Democrats have an image problem. We’re seen as the party of urban elites — pampered, overeducated dweebs, soft-handed dandies who ride scooters without embarrassment and name our pets after jazz musicians. Effete, self-important twerps sipping kombucha in the open-floorplan office of some start-up — “CRYSP, the app that provides a bespoke celery experience,” maybe. And I can talk like this because I’m one of these dorks.

I’m worried that Democrats aren’t factoring this reality in to the debate about student loans. Joe Biden campaigned on forgiving up to $10,000 in student debt, but Chuck Schumer and Elizabeth Warren want to forgive up to $50,000, and the Bernie Sanders wing of the party — which seems to think that adding the words “for all” to a program is the height of policy wonkery — wants universal forgiveness.

There’s a strong case for forgiving some of the roughly $1.6 trillion in student debt held by the government. Often, a person from a poor family will take out loans to build his or her future. We may lament our culture-wide obsession with college degrees — why, we could ask, does a B.A. in philosophy of Pokémon give you the inside track to a much-coveted internship at CRYSP? — but it’s the world we live in. Easing the burden for someone who took that path makes sense.

But that’s not the only type of person who takes out student loans. High-status professionals often take out loans in their work-yourself-to-death 20s so that they can obtain another degree in order to get a high-paying job to fund their midlife-crisis 40s. There are also degree dilettantes, people who go to grad school just because they’re young and lost and that CRYSP internship turned out to not be the rocket ship to success that they hoped it would be. Once again: I’m speaking from experience.

Loan forgiveness should try to separate the deserving from the … let’s say less deserving. From a fairness standpoint, that seems obvious. And from a Democratic Party messaging standpoint, that seems absolutely crucial. I’ve spent my career dealing with messaging and narratives, and I may have never encountered a more explosive “confirm the worst stereotypes about Democrats” land mine than the one that the left wing of the party is trying to get us to step on with student loans.

Prominent nerds at left-leaning think tanks like the Brookings Institution and the Progressive Policy Institute believe that student-loan forgiveness with no cap and no means testing would mostly go to the well-off. I think they’re right, though you can also find lefty wonks who disagree. What’s key from an electoral standpoint is that most people don’t give a bucket of pig lips about what a bunch of eggheads think. People form their own opinions; there’s no Excalibur of White Papers that will convince all in the land of your fitness to rule.

Most people know that not everyone who took out loans is a hardscrabble, working-class striver. And for all the debate about the exact financial profile of people who would get relief, 87 percent of Americans don’t have federal student loans.

How did Democrats get to a place where a big election-year priority is something that this 87 percent of Americans presumably don’t care about? We might as well campaign on getting Fine Young Cannibals back together or reforming the rules of international cricket.

It gets worse: Student loan forgiveness would increase inflation. The impact would be small, but good luck explaining that to people — the first rule of speechwriting is that the second you utter the phrase “as a percentage of the Federal Reserve inflation target,” you’ve lost. This will be seen as a giveaway to rich professionals that hurts the working poor.

Conservatives will have a field day with this. Prepare to meet the Person Who Got the Stupidest Degree in America, because that person will be on Fox News more than pundits who exude an “angry cheerleading coach” vibe. The case study will be some tragic dweeb who took out $400,000 in loans to get a Ph.D. in intersectional puppet theory from Cosa Nostra Online College and who wrote their dissertation about how “Fraggle Rock” is an allegory for the Franco-Prussian War. I can picture Tucker Carlson putting on his confused cocker spaniel puppy face and asking the poor sap, “Why do Democrats want to forgive every last penny of your student loans?”

Are we trying to foment populism? Are we trying to affirm the stereotype that Democrats serve the needs of educated elites and ignore everyone else? I am completely aware that no matter what, Republicans will portray us fancy little Fauntleroys ensconced in our twee nursery of upper-middle-class desires, deaf to the needs of the struggling masses. But it’s very important to me that this caricature not be true.

As someone who cares about the progressive project, I am begging Democrats to make means testing or a meaningful cap (or both) part of this policy. Focus the relief on low-income strivers and keep the money in the budget for other priorities, including higher education reform, which is the root cause of the loan problem. Retain the hope that maybe, possibly, something that could be called Build Back Better could be resurrected and passed and include something focused on those most in need of help with their student loans.

And don’t let the notion that Democrats are singularly focused on the needs of pampered, navel-gazing pipsqueaks who won’t drink coffee brewed using fewer than 26 steps be indelibly burned into people’s brains.

Jeff Maurer (@JeffMightBWrong), a former speechwriter for the E.P.A. and former senior writer for “Last Week Tonight With John Oliver,” writes the newsletter I Might Be Wrong.