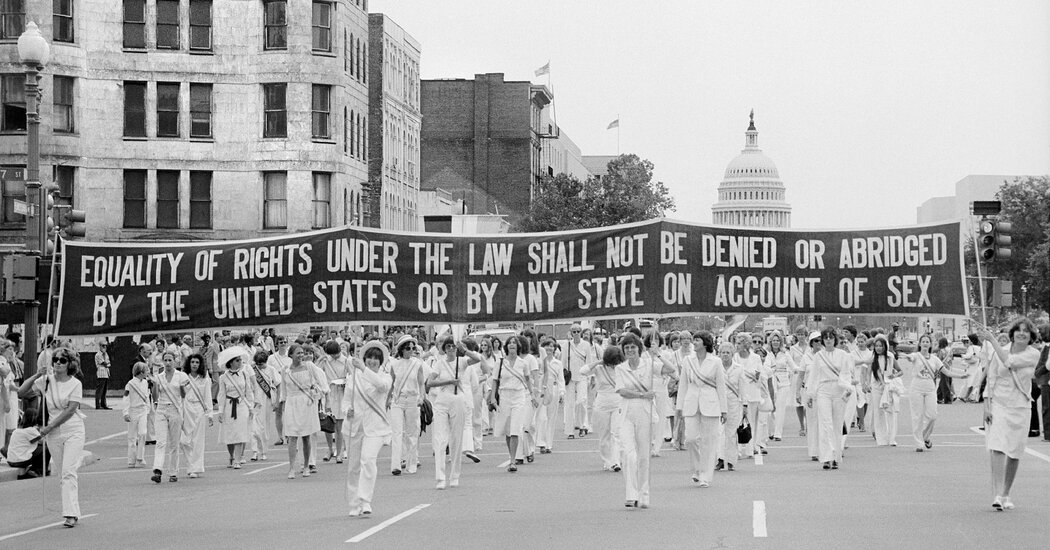 
In Justice Samuel Alito’s draft opinion that would overturn Roe v. Wade, perhaps what’s hardest to bear for abortion rights advocates is the implicit suggestion that the progress women have made is a reason to throw out Roe. In a sense, he turns feminism against itself.

Roe v. Wade and Planned Parenthood v. Casey, the 1992 Supreme Court decision that reaffirmed the right to abortion, were both based on the 14th Amendment’s guarantee of liberty, which the court interpreted as protecting a woman’s right to choose to terminate a pregnancy free of unreasonable government interference. Roe said the liberty interest included a right to privacy. Casey added that the right to choose whether and when to have a child made it easier for women “to participate equally in the economic and social life of the nation.”

Justice Alito rejected that reasoning, arguing that the right to an abortion isn’t a protected liberty interest in the Constitution because it’s not rooted in the country’s history and tradition. But that argument would actually reinforce the historical discrimination women face, as Julie Rikelman, the lawyer for the Mississippi abortion clinic at the center of the case, Dobbs v. Jackson Women’s Health Organization, argued to the court in December.

And it would threaten many constitutional rulings the court has made, such as Griswold v. Connecticut, the privacy decision freeing married couples from state restrictions on contraception that was an underpinning of Roe, and Obergefell v. Hodges, the same-sex marriage ruling. For the moment, Justice Alito’s draft “sharply distinguishes” some of these rulings from Roe. But who knows what will happen down the road?

Justice Alito also addressed the argument by abortion rights supporters that, as he described it, “changes in society” require the right to end a pregnancy. But he reduced it to one tepid sentence — that defenders of Roe and Casey contend that without access to abortion, people won’t be able to “choose the types of relationships they desire, and women will be unable to compete with men in the workplace and in other endeavors.”

Missing here is the extensive social science evidence — which is crucial for linking access to abortion to the 14th Amendment’s liberty guarantees — that “Roe changed the arc of women’s lives,” as a brief filed with the court by 154 economists and researchers argued. The legalization of abortion “had large effects on women’s education, labor force participation, occupations and earnings,” their brief said, which Ms. Rikelman took care to bring up during the court’s December argument.

The brief made clear, too, that abortion continues to function as a lever of equality. Pregnant people are still denied accommodations at work, despite a 1978 law that’s supposed to protect them from discrimination. Women still experience an economic “motherhood penalty.” And the financial effects of being denied an abortion, according to one important study the economists cite, are “as large or larger than those of being evicted, losing health insurance, being hospitalized or being exposed to flooding” resulting from a hurricane.

Justice Alito grappled with none of this. Instead, he devoted a long paragraph, replete with footnotes, to the arguments by opponents of abortion rights. He listed more accepting attitudes toward pregnant women who aren’t married, state and federal laws that ban discrimination on the basis of pregnancy, family leave laws and health insurance and government assistance to cover the costs of having a baby. He also noted, as Justice Amy Coney Barrett did during the oral argument before the court, that safe haven laws allow women to drop off babies anonymously.

Then, after putting his thumb on the scale, Justice Alito backed away from choosing a side. “Supporters of Roe and Casey must show that the court has the authority to weigh those arguments and decide how abortion may be regulated by the states,” he wrote. “They have failed to make that showing.”

And so, Justice Alito said, “we thus return the power to weigh those arguments to the people and their elected representatives.”

But the illusion Justice Alito has created is clear in the way he laid out the arguments. The implication is that women no longer need the availability of abortion to be free, if they ever did. (Mississippi’s attorney general was explicit on this point, arguing in her brief that “the march of progress has left Roe and Casey behind,” now that contraception and adoption are widely available.)

Justice Alito also distorted feminism when he tried to explain why stare decisis — the principle that the court should generally respect its own precedents — doesn’t apply to Roe and Casey. Respect for precedent is important because people rely on the law’s stability to plan their lives. The longstanding validity of Roe and Casey meant that people could move around the country without worrying that they could wind up pregnant in a state with an abortion ban.

But Justice Alito, disregarding the evidence about the benefits of abortion to many people who have them, said that it’s “hard for anyone — and in particular, a court to assess, namely, the effect of the abortion right on society and in particular on the lives of women.”

He had one more card. Since the court would return the legality of abortion to the states, “women on both sides” could duke it out with everyone else at the ballot box. “Women are not without electoral or political power,” he dryly noted, pointing out that they tend to vote at higher rates than men.

In other words, protecting abortion, a constitutional right since 1973, would become the job of women after their liberty to choose is tossed into the trash can of rejected jurisprudence. So much for the progress women have made.

Emily Bazelon is a staff writer for The New York Times Magazine and the author of “Charged: The New Movement to Transform Prosecution and End Mass Incarceration.”