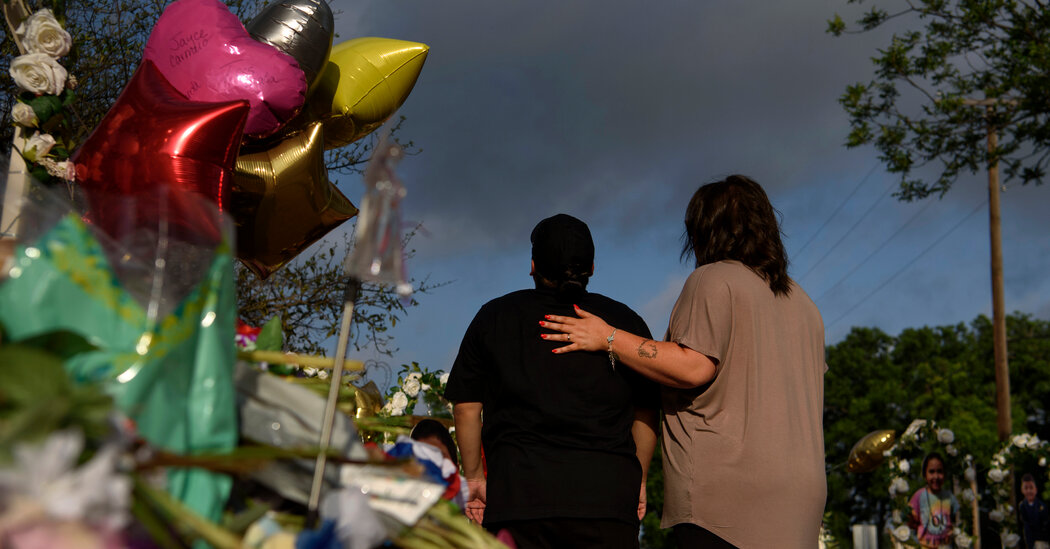 My own child is afraid that I will be killed in the line of duty. I am an elementary school teacher. After two teachers were found shot to death in Uvalde, I held my 15-year-old son in my arms while he repeated, “Mom, we have to get you out of America.”

I love being a teacher, and because of that, my own child is fearful for my life. How did this happen? I did not enlist in the military. When did the willingness to put your life on the line become an acceptable prerequisite for being an educator?

A country where it is dangerous for children to go to school, for people to go grocery shopping, or to a movie or a concert doesn’t look or sound like the America I grew up learning to believe in.

We have become a country of extremists. There is no logic or rationale that explains providing access to rapid-fire weapons to the general public, let alone an 18-year-old.

There are so many reasons that teachers and children should not be asked to bear this burden, but the bottom line is that it shouldn’t be dangerous to go to school in America. Legislators, Americans, fix this! Turn the world right side up again so that my child doesn’t have to worry about his mom being killed in the line of duty.

I was an armorer in Vietnam, so I had to be expert in the use and repair of all of the weapons used by my company. Later, I was a classroom teacher and a school administrator for more than 30 years.

I can assure you that even with my experience in a war and all of those years in the schools, I would not have been ready for a gunman bursting through my classroom door firing an AR-15 — not even if I were packing a locked and loaded handgun on my hip.

At the N.R.A. annual convention, Donald Trump trotted out the tired N.R.A. talking point that armed teachers would be the best defense for a classroom. This, of course, is absurd on the face of it. Mr. Trump and those who spout the same nonsense would like us to imagine that a fourth-grade teacher in Texas would have taken out the gunman. He and all of the other pro-gun politicians absolutely know that this is an insidious lie.

I taught for 22 years, experiencing several lockdowns a year, and I can tell you that there is nothing scarier than being in a locked classroom with 30 kids huddled in a back corner and having no way to protect yourself or them.

I currently hold 14 pistol instructor certifications and own a firearms training business — yet I can’t carry my firearm into a school when I substitute teach.

Programs like Faster Saves Lives, which is a program to train teachers to respond to live-shooter situations and render aid, are the answer to this issue, not more gun restriction that would further bench people like me from helping in a worst-case scenario.

Police and security guards can’t be everywhere in the building. Firearm prohibitions do not work, while security training and preparedness do. Instead of wasting time with more nonsensical federal regulations, let’s concentrate on something that works to solve the school shooting situation.

I have spent nearly 30 years as a New York City middle school teacher. As I near the end of my teaching career, I find the call to arm teachers disgusting.

How will I or my colleagues packing a pistol have stopped the shooter in Uvalde or Parkland or Sandy Hook? The police themselves in Texas stated that they were afraid of the shooter since they were outgunned.

I mean, seriously, you cannot trust us to pick out the books for your children to read or teach them American history, but you will trust us with a gun to protect them?

As the author of a book on happiness, and a board member for the oldest continually running boys camp in the United States, I’m a strong believer in the benefits of summer camp.

After all, two of the strongest predictors of happiness, based on empirical scientific research, are spending time in nature and building close relationships.

But perhaps the most beneficial part of summer camp these days is the break it provides from spending time on social media, which is consistently linked with higher rates of anxiety, depression and loneliness.

As I often say — to my children and to my college students — I feel lucky that I’m old enough that during high school I never had to see photos of parties to which I wasn’t invited.

Catherine A. Sanderson
Hadley, Mass.
The writer is chair of the psychology department at Amherst College.

Re “Putin Rules His Nation Like a Psychiatric Ward,” by Farida Rustamova (Opinion guest essay, May 25):

The choice of psychiatric ward as a metaphor for Vladimir Putin’s Russia is understandable but unfortunate and lends weight to the stigma that surrounds psychiatric care and the individuals who receive it.

People are “sentenced” to so-called psychiatric hospitals in Russia that are simply prisons that abuse their inmates with the thinnest patina of psychiatric care.

Inpatient psychiatric units in the United States may be imperfect institutions struggling with an inexact medical science and within an imperfect health system, but they generally strive to treat illness with dignity and respect for the individual and to bolster the autonomy and recovery of those struggling with mental illness.

Harold I. Schwartz
West Hartford, Conn.
The writer is psychiatrist in chief emeritus at the Institute of Living, Hartford Hospital.