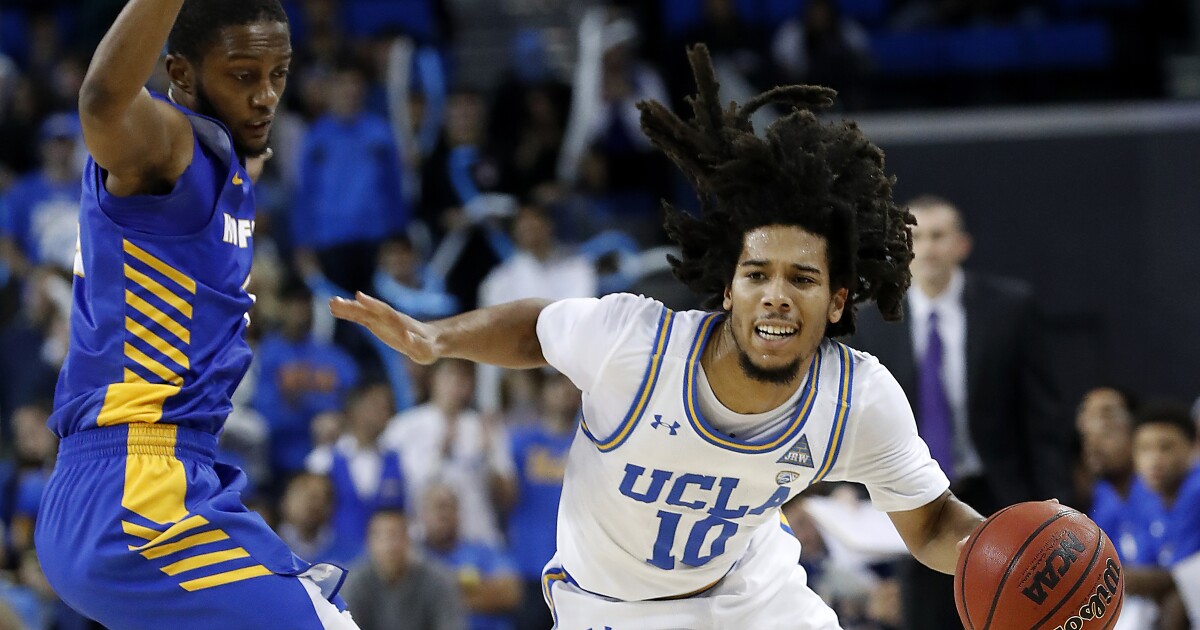 It’s hard to plan ahead when nearly your entire roster turns over in roughly a year.

That could be the predicament facing coach Mick Cronin next spring, when his UCLA Bruins might have eight or more scholarships available.

Cronin said he prefers as much continuity as possible, a steady stream of returning players girding his team from the sorry seasons that one-and-done mills must occasionally endure when a roster hastily thrown together doesn’t quite work.

Yet a confluence of factors could leave the Bruins susceptible to major roster turnover before the 2022-23 season.

Johnny Juzang and Cody Riley could be long gone by next spring if they decide to keep their names in the NBA draft at the July 7 deadline.

Senior guards Jules Bernard and David Singleton have the option to return for the 2022-23 season because of eligibility extensions granted in the wake of the COVID-19 pandemic, but they could also choose to move on from college basketball for various reasons.

The same goes for redshirt junior point guard Tyger Campbell, who may or may not want to spend a fifth season at UCLA in 2022-23.

Incoming freshman guard Peyton Watson could leave after next season if his stock remains in NBA draft lottery range, as widely expected. Graduate transfer Myles Johnson and junior guard Jaime Jaquez Jr. — as well as anyone whose pro stock unexpectedly skyrockets — also could opt for the NBA if they like their draft projections.

“At UCLA, you’re always going to hopefully have the problem that you have good enough players that can possibly make the NBA, so it’s hard to plan your team out years in advance,” Cronin said. “So the challenge now becomes, you kind of have to live year to year.”

Additionally, there’s always the possibility that someone could grow unhappy with his role and transfer, even if the Bruins were among the handful of major conference teams that warded off that unpleasantness this spring after their run to the Final Four.

If Juzang and Riley depart for the NBA draft, their scholarships are unlikely to be filled over the summer.

“There’s going to be nobody available at that point,” Cronin said.

Cronin said he intended to sign at least four players during the early signing period in November and then add in the spring as needed. The Bruins already have commitments from Amari Bailey, a standout guard from Chatsworth Sierra Canyon High, and Dylan Andrews, a slick point guard from Los Angeles Windward.

UCLA could also supplement a 2022 class that’s already ranked No. 2 nationally by 247Sports with a few players from the transfer portal.

To help manage roster turnover, Cronin said he speaks with recruits about their expectations for how long they intend to remain in college, even if their stay figures to be a short one. While Watson was noncommittal when asked whether he would stay with the Bruins for only one season — he said he was “just focused on getting to UCLA and winning” — Bailey, as well as Andrews, acknowledged his plan was to stay for only their freshman year.

And so the roster churn will start anew.