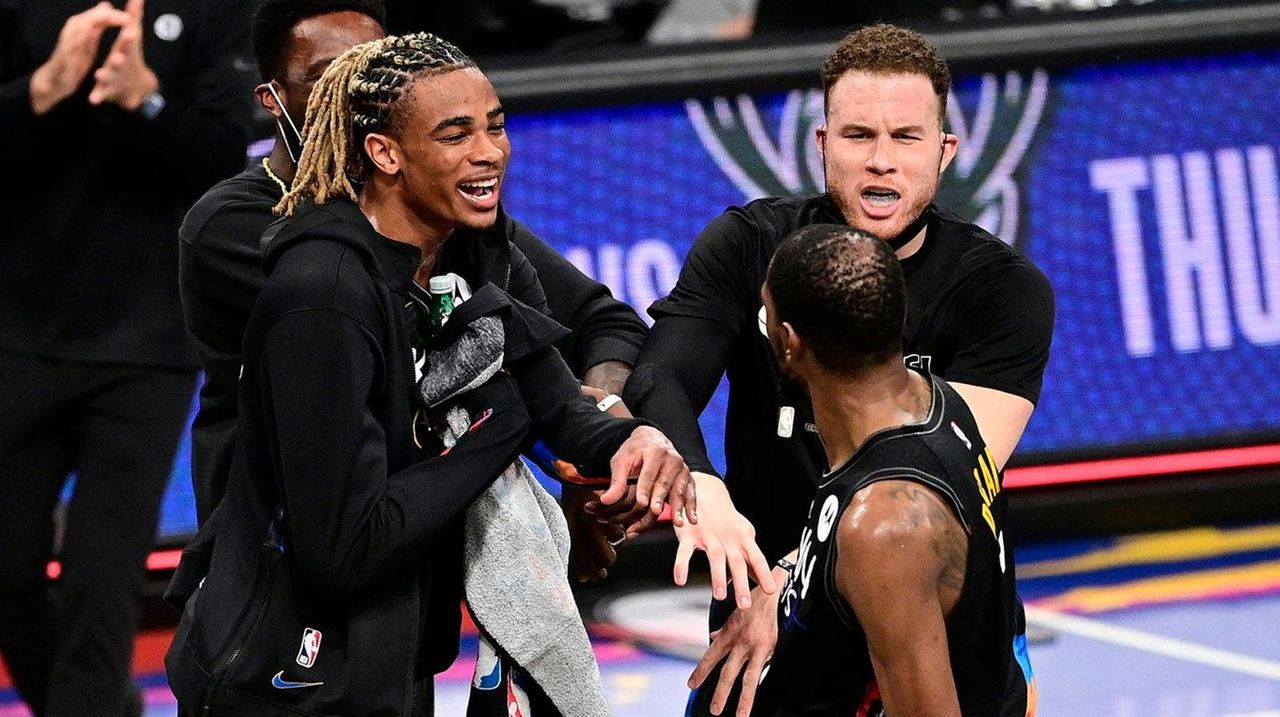 Despite the loss of injured James Harden, who sat courtside Monday night at Barclays Center, the Nets responded to adversity like a team that looks fully capable of playing NBA championship-caliber basketball without him. Their lead reached an absurd 49-point margin in the fourth quarter of their 125-86 blowout of the Bucks in Game 2 of their Eastern Conference semifinal series.

It was the second straight superb defensive effort by the Nets, who held two-time MVP Giannis Antetokounmpo to just six first-half points. They will take a 2-0 series lead to Fiserv Forum in Milwaukee for Game 3 Thursday night.

Kevin Durant topped the Nets with 32 points on 12-of-18 shooting, Kyrie Irving added 22 points, Bruce Brown took advantage of his starting role in place of the injured Harden to contribute 13 points, and Joe Harris had 13. The Nets shot 52.1% overall and 50.0% from three-point range (21 of 42).

Blake Griffin played hard-nosed defense against Antetokounmpo, who finished with a mere 18 points when he was lifted midway through the fourth quarter and serenaded by chants of “Where is Giannis?” The Bucks also got 17 from Khris Middleton, who again struggled with 7-for-20 shooting. Just as they did in Game 1, the Bucks struggled from three-point range with an 8-forf-27 effort.

Going into Game 2, Nets coach Steve Nash fired a bit of a curveball. After Harden was injured 43 seconds into Game 1, he gave most of Harden’s minutes to Mike James, who delivered 12 points and seven rebounds. But he switched up and went with Brown as the other starting guard alongside Irving. It wasn’t surprising because Brown frequently has been part of the starting lineup, and he brings the valuable component of defensive toughness.

“I think Mike is a part of the plan,” Nash said. “He did very well. Even though we saw the rotations we saw and adjusted in Game 1 after James went out, we’re still searching, in a sense, for what is our rotation and how we’re going to adapt this time of year against an elite opponent.

“It’s nice that it worked out, but we’re not under any false confidence that that’s the way it’s going to be forevermore. We’re going to have to be willing to adapt and push different buttons.”

Although Landry Shamet and Tyler Johnson are capable ballhandlers, it seemed clear Nash liked the idea of using James as the second-unit point guard. “He’s kind of the playmaker on our bench,” Nash said of James, who totaled 10 points.

But the selection of Brown to start made sense because the Nets were hoping to continue the strong defensive play they showed in Game 1 when they held the Bucks to a 6-for-30 effort from three-point range.

“We know they can shoot better for sure,” Nash said of the Bucks. “I thought we did a good job defending the three-point line, so we’ve got to continue to defend it well. If they create better shots, they’ll make more so it’s about not allowing them to create really good looks.”

As good as the Nets’ defense was in Game 1, it was even better in Game 2 and Brown had a lot to do with that thanks to his physical coverage of Middleton, who was scoreless in the opening period and eventually missed his first eight shots of the game. And Griffin held Antetokounmpo to just two first-quarter points.

Starting from midway through the first quarter to early in the second period, the Nets put together an extended 30-11 run to build a 43-21 cushion. The Nets scored on 14 of 16 possessions in that stretch. Later in the second period, three-pointers by Durant and James gave the Nets their biggest lead of the opening half at 60-33. The Nets’ 65-41 halftime lead tied the second biggest halftime lead in franchise playoff history. Antetokounmpo had just six points at the break.

The Nets opened the third quarter with a pair of threes by Harris and one by Irving to take a 28-point lead at 74-46. The Nets hit a cold spell, missing seven straight shots, and Antetokounmpo and Middleton finally got going on offense as the Bucks cut their deficit to 21. But an 10-1 Nets burst, including back-to-back threes by Shamet, pushed their lead to a game-high 30 points at 95-65 at the end of the third quarter.

Greg Logan has worked for Newsday since 1982 covering a wide array of sports and events, currently including the Brooklyn Nets beat.