NASCAR Clash is coming to the Coliseum in 2022 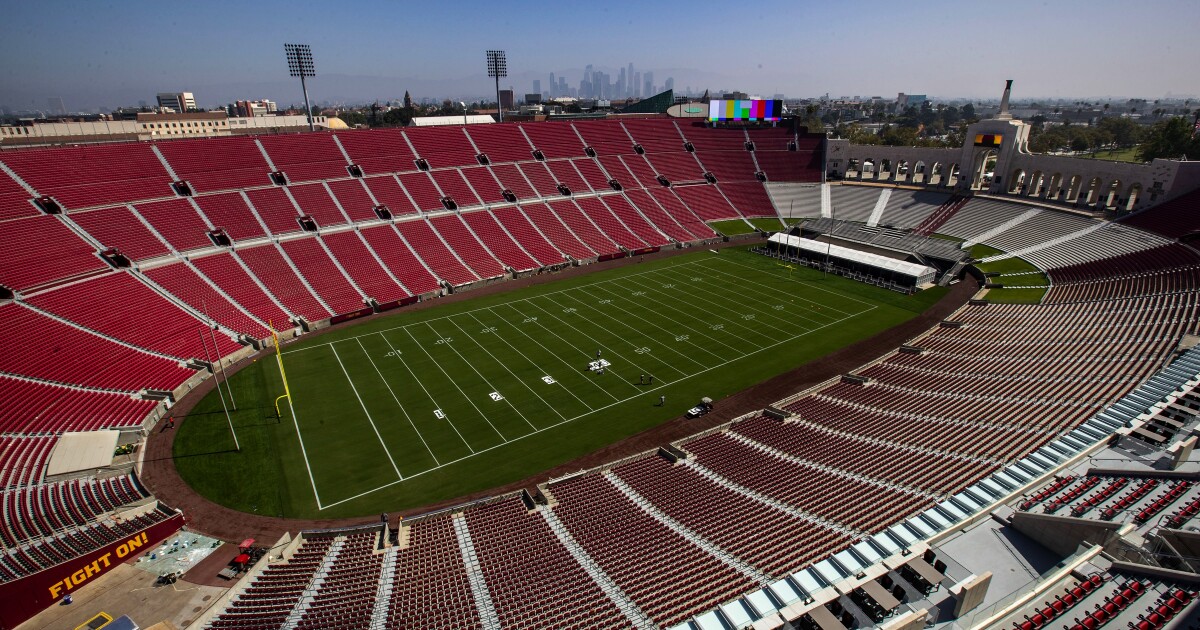 L.A. Affairs: This is why I stood him up on our very first date


In a long-standing break with tradition, NASCAR will not have the first event of its 2022 season in Daytona Beach, Fla., but instead in Southern California. In an even bigger break with protocol, it won’t be at a traditional racing facility but inside the L.A. Memorial Coliseum.

NASCAR announced Tuesday that the Clash, an exhibition of top drivers, will be held on a temporary quarter-mile asphalt track inside the Coliseum on Feb. 6, two weeks before the Daytona 500. The last time the first event of the year was not at the Daytona International Speedway was in 1981, when it was at the road course on Riverside International Raceway, which was closed in 1989.

Details of how the race will be run are still being worked out, but the event, which will have races over two days, is set.

“It’s a one-of-a kind event,” said Ben Kennedy, NASCAR’s senior vice president of strategy and innovation. “We’ve never done anything like this before in our sports history and can’t wait to see how it all unfolds.”

It might be held more than once as the deal between NASCAR and the Coliseum is for one year with two one-year options.

The Clash, which in the past has had a purse of $1 million, is an exhibition that has taken on many different forms since it started in 1979. This year it was on the Daytona road course with two segments of 15 and 20 laps. In previous years, on the speedway portion of Daytona, it was three segments totaling 75 laps. It’s an invitation-only race.

Kennedy said that because the track will be only a quarter-mile, there will be a “maximum of 25 cars, but we’ll probably be closer to 20 or so.

“There will be eight to 10 pit stalls [in the infield] and it will be noncompetitive,” Kennedy said. “If someone has a flat tire or minor repairs, they can come down pit road and service it. We probably won’t have live pit stops just because of the logistics and the footprint.

“We’re still working on laps but … we’ll probably look a little different than our traditional Clash format. But we really want to make something that is engaging and exciting and can also create some additional content on the weekend.”

The race will be broadcast after the NFL Pro-Bowl on FS1.

The event is not going to disrupt the Coliseum event schedule, according to Joe Furin, general manager of the Coliseum.

“It’s our downtime, but the stadium will not be available from the beginning of the year until the end of February,” Furin said. L.A.’s professional rugby club, the Giltinis, will have to adjust its schedule near the end of February as the track is removed.

“It is going to have to be built from scratch each and every time,” Furin said. “You put down a protective layer over the grass, not to save the grass but to protect sprinklers and other foreign material, such as rocks and gravel, from getting in the dirt base. There will be a banked 5 to 7 feet of compacted dirt and then a couple inches of asphalt.”

The amount of banking is still being worked on but is expected to be between 2 and 5 degrees.

The Coliseum changes its grass at least once a year and sometimes even more often. In 2018, when both the Rams and USC were using the stadium, the grass was replaced five times.

“We’ve talked about a number of different markets, but we kept coming back to Los Angeles,” Kennedy said. “There are more NASCAR fans in Los Angeles than any other market. And it’s No. 2 for viewership for NASCAR. We have a ton of fans out here who are hungry for NASCAR racing.”

There was no NASCAR race last year at the Auto Club Speedway in Fontana because of the pandemic, but there will be next year. NASCAR has not announced its schedule for 2022 but Kennedy said that after the Clash, racing will “come back a couple weeks later for our 25th anniversary at Auto Club for the [NASCAR] Cup series race.”

This will be the first NASCAR race in the Coliseum but not the first auto race. In 2011, there was a truck race held on an asphalt track, but it only lasted one year.

In the 1980s, the Mickey Thompson off-road series had races inside the Coliseum, and in the 1940s, there was midget car racing that Furin said would attract crowds up to 50,000 people.

“Since the track will be wall to wall … we have to create some separation between fans and the racing,” Furin said.

While this track has never been built, it has been tested through computer simulations.

“We have a simulation partner called iRacing,” Kennedy said. “They’ve modeled out the Coliseum and we’ve had a few different Cup drivers on it so far. We have some of our iRacing drivers on it, too, and some of our esports drivers have been playing some of the different variations of the banking. We’re getting a lot of good data and insight from it.”

One thing that was learned, Kennedy said, is that “the flatter the track, the more the drivers like to use the apron.”

While NASCAR is taking the lead on the project, the Coliseum is a partner in the event’s success.

“When you are in the stadium business [for 30 years], you think you’ve seen it all and done it all,” Furin said. “But this is different. Every football game is special, but this is way more than special; it’s awesome.”

Tickets go on sale through Ticketmaster at 10 a.m. Thursday, with prices starting at $65 for adults and $10 for those under 12.

L.A. Affairs: This is why I stood him up on our very first date