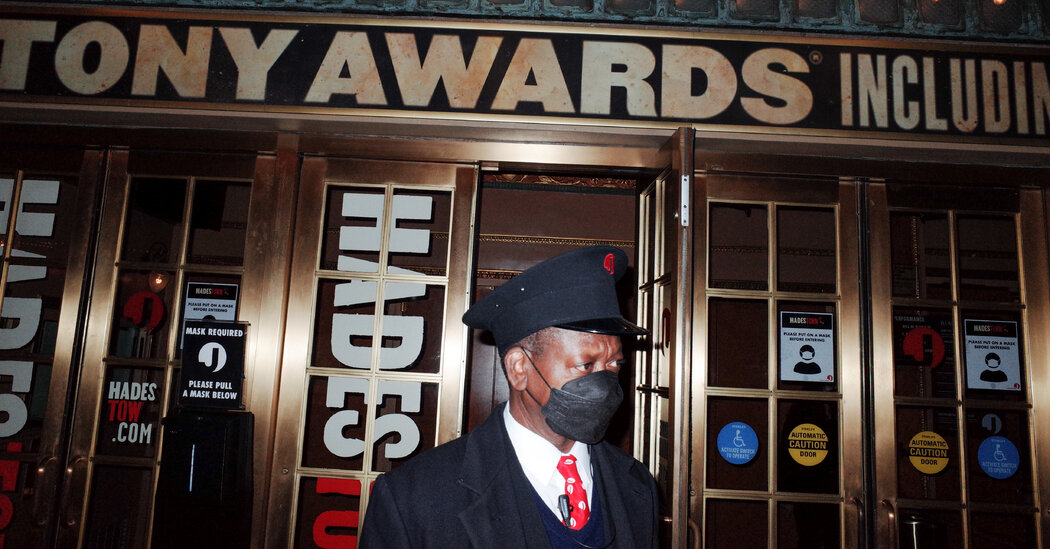 
A man had his photo I.D. out and in his hand as walked up to the Gerald Schoenfeld Theater on Broadway to see “Come From Away,” but no one checked it. The families streaming in to see “The Lion King” were told to have their tickets out and their masks on, but there was no mention of vaccine cards. And the Covid safety officers in neon yellow vests who used to patrol outside “Six” were gone.

Most Broadway theaters stopped checking the vaccination status of their patrons this week for the first time since they began to reopen last summer, easing safety protocols the same week rising coronavirus cases placed New York City into a higher risk level.

The industry hopes that doing away with vaccine checks — which have also been eliminated at New York City restaurants, movie theaters and other venues — will make theatergoing more attractive, and that the remaining mask mandate will help keep audiences safe as cases have risen, but hospitalizations and deaths remain low.

While some patrons welcomed the change, others said they felt uneasy about going into crowded theaters without the assurance that their seatmates were vaccinated, and several nonprofit Broadway theaters continue to require proof of vaccination.

“I just don’t feel as safe as I have the past several months,” said Lauren Broyles, 44, an executive assistant from Hershey, Pa., who visited New York to see shows several times last winter but said she had stopped planning a summer theater trip after reading that Broadway dropped its vaccine mandate. “I’m waiting to hear what’s next.”

But Michael Anderson, 48, of Hudson, N.Y., who was standing in line the other day to see “Hangmen,” said he thought that while vaccine checks had made sense earlier, he felt they were no longer necessary. “At this point, I’m vaccinated and boosted,” he said.

The changes to safety protocols come as Broadway yearns for a profitable spring. More than a dozen shows opened last month, a major, risky bet for a theater industry trying to bounce back from a rough winter in which the virus forced a number of shows to cancel performances during the crucial holiday period and others to close prematurely.

Some of the virus-related turbulence has continued, though. Stars including Matthew Broderick, Sarah Jessica Parker, Daniel Craig and Laurence Fishburne have all tested positive for the virus, missing shows and in some cases causing cancellations. So many actors have been out with coronavirus cases that the Tony Award nominations were delayed until Monday to give nominators more time to see all the eligible performances.

Broadway theater owners and operators were among the first to require customers to show proof of vaccines and to wear masks, acting together to come up with a common set of protocols even before the city adopted similar vaccine requirements for many indoor activities. Now there is no longer a uniform policy. While all of Broadway’s for-profit theater owners and operators agreed to stop checking proof of vaccination as of May 1 (“Moulin Rouge! The Musical” continues to require proof of vaccination for some people in its special table seating near the stage and cast), three of the four nonprofit Broadway theater operators have decided to keep their vaccine mandate in place.

The vaccine mandate is being lifted as 77 percent of New York state residents have been fully vaccinated. But Broadway relies heavily on tourists, and the vaccination rate in the country as a whole is lower: two-thirds of United States residents are fully vaccinated.

The removal of the mandate will allow theaters to save money by eliminating the jobs of the people who were hired to check proof of vaccination. Jeff Whiting, the president of SwifTesting, a company that has been working with the Shubert Organization to help enforce the Covid protocols at its theaters, said that his company had provided between five and 10 safety workers per show at a cost to productions of between $5,000 and $10,000 per week. About half of those positions have now been eliminated, Mr. Whiting said, with the rest of the workers retained to help enforce the mask mandate.

Officials who run the three nonprofits that decided to keep their vaccine mandates said that their priority was maintaining the trust of their core audience members, and especially their subscribers.

“Our patrons have purchased tickets, and in the case of subscribers, been assigned performances through May, with the understanding that they would be entering a fully vaccinated and masked environment,” Steve Dow, the Roundabout Theater Company’s chief administrative officer, said in a statement about its Broadway run of “Birthday Candles.”

“We know that uniform approaches to Covid policies across all of Broadway have helped create clear messaging to date,” he added, “but the bottom line is that as an institutional nonprofit theater, our audience is built upon longstanding and ongoing relationships.”

Adam Siegel, the managing director of Lincoln Center Theater, which runs another Broadway theater that has held onto its vaccine mandate, acknowledged that keeping the requirement made it a bit of an outlier at a moment when restaurants and most other theaters were not checking vaccination status. “But on the other hand, there is also an uptick,” he said, which made relaxing the requirements seem “incongruous.”

“I’d rather not write back to my subscriber base and say, ‘We know you bought tickets with a level of comfort, but we just changed our mind,’” Mr. Siegel said.

Several epidemiologists said in interviews that the removal of the vaccine requirement while maintaining the mask mandate was understandable, since there was growing evidence that while the vaccines are effective at protecting people from severe illness, they do not eliminate the risk of infection and transmission.

“I think it’s fairly reasonable, honestly,” said Katelyn Jetelina, an epidemiologist at University of Texas Health, of Broadway dropping the vaccine mandate. “We know that masks — if they’re good masks — do a really nice job at protecting the wearer and those around you.”

Dr. Blythe Adamson, an infectious disease epidemiologist who has advised several Broadway shows on their Covid policy through her company, Infectious Economics, said she was supportive of the new protocols.

Since March, when the city eliminated vaccine mandates at restaurants, many have been booming. The executive director of the New York City Hospitality Alliance, Andrew Rigie, said “business has generally been increasing at restaurants” since the rules were relaxed “for a multitude of reasons.”

Safety protocols have been shifting quickly. A federal judge struck down a nationwide mask requirement for airplanes last month. But a person who gets off an airplane in New York City and then gets on a subway is still required to wear a mask while riding.

In Times Square this week, some of the sidewalks outside Broadway theaters appeared a little less crowded than they had in recent months, and people seemed to be streaming into theaters more quickly without waiting for their vaccine passes to be inspected.

“I got into the theater a lot faster because they weren’t checking vaccination cards,” said Lee Seymour, 34, a producer and theater journalist recalling a recent visit to Broadway. “But there’s also a real psychic benefit knowing that you are in a room full of people who continue to take a lethal virus very seriously.”

Virus protocols have divided the country, and they divide some theatergoers, too.

Brittany Petruzzi, 35, said she wanted Broadway to eliminate its mask mandate, too, and said that she would not being seeing a Broadway show on her trip to New York this year, as is her custom, because she found that the restrictions on Broadway remain too burdensome.

“The first Broadway show to drop the mask requirement will get my business, whether I want to go see that particular show or not,” said Ms. Petruzzi, of Kernersville, N.C. “I have no interest in seeing a play while masked. I think it’s too much of a barrier to what theater does so well, which is unite people.”

But for Kathy Findon, 58, of New Jersey, the risk of exposure — and the possibility of lingering symptoms — was still front of mind.

“I’ve gone close to almost two and a half years of not getting Covid,” she said. “Long Covid is an issue. Why would I take a chance?”

Broadway theaters will continue requiring patrons to wear masks at least through June 30.