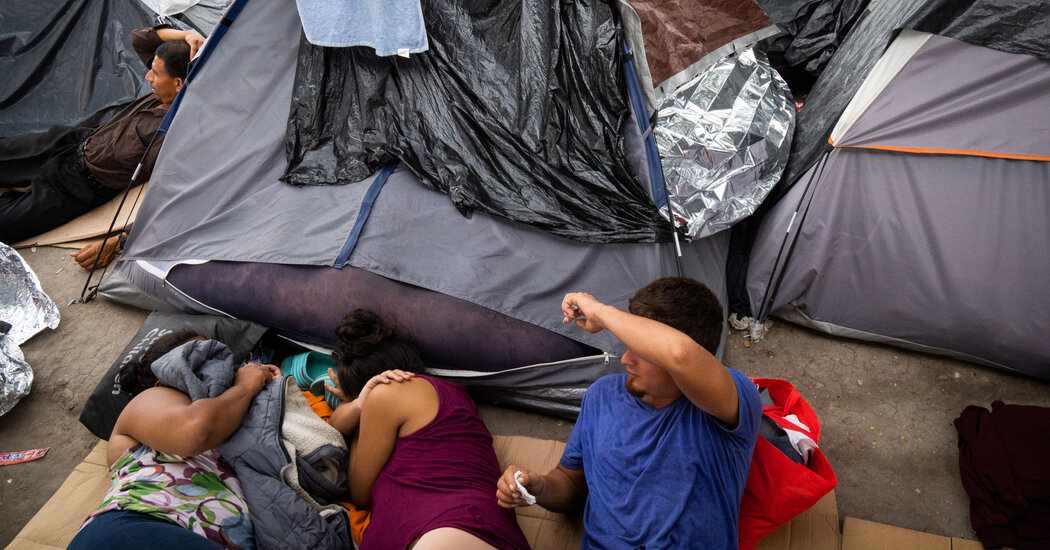 
LAFAYETTE, La. — Lawyers for 24 states critical of the Biden administration’s immigration policies argued on Friday for a nationwide injunction to maintain the swift expulsions of migrants under a pandemic-related public policy, and a federal judge said he planned to issue an order before the policy is set to be rescinded on May 23.

Judge Robert R. Summerhays of the U.S. District Court for the Western District of Louisiana did not say how he would rule, but he has previously been supportive of the arguments brought by the 24 mostly Republican-led states to force the measure, known as Title 42, to remain in place.

Scott St. John, Louisiana’s deputy solicitor general, said after the hearing that he was “confident” based on the judge’s comments during the hearing that the states that had sued were “in a good position.”

Mary Yanik, a lawyer for the Tulane Immigration Rights Clinic, said that Judge Summerhays’s posture appeared consistent throughout the more than two-hour hearing in Lafayette, La.

“The judge seemed skeptical that this is a purely public health order,” she said. “And he does not seem convinced that the federal government can ignore immigration consequences.”

Most of the principal lawyers in the case declined to comment after the arguments.

At stake is whether the Biden administration can proceed with its announced plans to lift Title 42, given the recent easing of the coronavirus pandemic, a move that would allow thousands of migrants a day who currently are being turned away to instead enter the country and submit claims for asylum.

The Department of Homeland Security has said that it was preparing for the possibility that 18,000 migrants would show up daily, once the measure is lifted, compared with 8,000 currently. State leaders who filed the lawsuit said local officials are unprepared for such an influx at a time when migration on the southern border already is reaching record levels.

About 2 million people have been expelled since March 2020 under the order, many of whom would have otherwise been admitted to the United States for an evaluation of their asylum claims or placed into deportation proceedings. Those processes often take months or years.

The judge has already issued a temporary restraining order, renewed this week, prohibiting the government from taking steps to unwind the policy before he rules on the case.

The arguments offered by both sides at Friday’s hearing centered around whether Title 42 was a public health policy or an immigration policy. Lawyers for the federal government continued to argue that the policy was narrowly limited to protecting against coronavirus transmission while lawyers for the states that sued listed the costs that states would bear if Title 42 were lifted — to health care systems, law enforcement, education, social services, and even agencies that would be issuing more drivers’ licenses.

The Biden administration has said its plans to lift the measure were based on the Centers for Disease Control and Prevention’s announcement on April 1 that it was no longer needed given the widespread availability of vaccines.

“The C.D.C. did exactly what an agency must do,” Jean Lin, a lawyer representing the federal government, told the judge, noting that the agency has reassessed virus conditions in the country every 60 days. Dealing with “downstream consequences of Title 42 is outside of the C.D.C.’s statutory authority,” she said.

The public health order has required the U.S. Border Patrol to turn away migrants who crossed land borders since March 2020, when it was introduced, without allowing them to request asylum, by either expelling them by bus to Mexico or by plane to their countries of origin.

Two days after the C.D.C. announcement, Arizona, Louisiana and Missouri filed a suit in federal court seeking to keep the policy in place, arguing that its termination would cause them irreparable harm. They were later joined by 21 other states.

The judge on Friday denied a motion from a family seeking asylum at the California-Mexico border and a nonprofit to join the lawsuit in order to argue that the judge, should he decide that Title 42 be kept in place, apply his ruling only to states that are part of the litigation.

That would theoretically allow the administration to begin accepting asylum applicants in several border states, including California, New Mexico, Washington, Minnesota, Michigan, Vermont and New York. North Dakota and Idaho were the only northern border states that joined in the litigation; on the southern border, Texas and Arizona were part of the lawsuit.

“Texas and Arizona should not be permitted to dictate immigration policy for the entire country,” said Talia Inlender, deputy director of the Center for Immigration Law and Policy at the U.C.L.A. School of Law, which was counsel to the family seeking asylum and the organization.

“We still remain hopeful that the judge, should he issue an injunction to keep Title 42 in place, will limit it to the states that are suing,” she said.

Republicans campaigning on immigration and moderate Democrats facing tight races in the November midterms have called for keeping Title 42 in place, citing the potential for overcrowding and turmoil at the southern border.

Republican lawmakers have sought a vote on an amendment that would preserve the policy, which has already held up a separate Covid-19 aid package.

Your Wednesday Briefing: Sri Lanka, Out of Fuel

The White House opens up another round of free, at-home virus tests to order through the Postal Service.