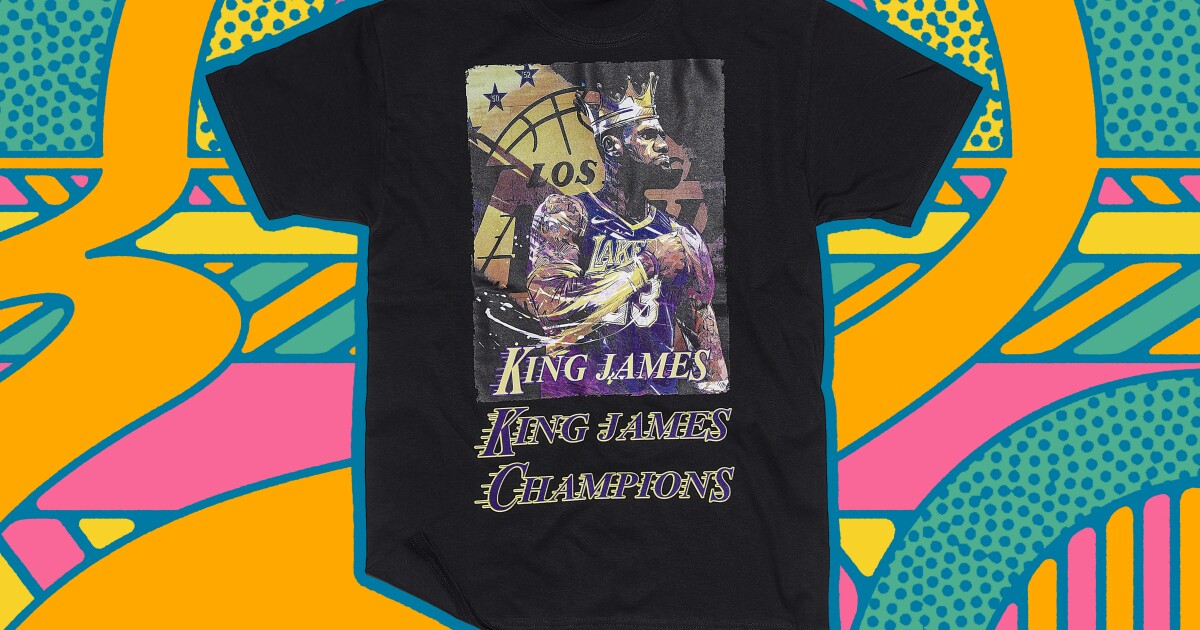 My closet has plenty of pricey grails from fancy fashion houses with care tags written in Italian, but those aren’t the pieces I’m most proud of. Some of my most treasured possessions are obscure, cheaply made bootleg sports T-shirts. They’re not quite one of a kind, but they’re close. The aesthetic of the bootleg — faded logos, crooked typefaces, bleeding colors — calls attention to its own trickery in a way that feels more genuine than mass-produced originals. It distills to its essential element why we buy things.

Los Angeles has a bad rap for being a fake place; a land of fillers to plump up our sagging faces and broad smiles to hide ulterior motives. But there’s something genuine, endearing about fakeness too. In Koreatown, where I live, one of the few reliable signs of human civilization during the most soul-crushing days of the COVID-19 pandemic was a modest street vendor on the usually bustling corner of Wilshire Boulevard and Vermont Avenue hawking T-shirts, hats, scarves and bags for the rare passersby waiting for the bus or trying to get takeout. There’s no artifice or pretension to the transactions, which is a far cry from every sales associate at a trendy boutique pretending to be my friend so I’ll buy a pair of $500 loafers.

Sports bootlegging has a venerable history in L.A. The iconic yet easily replicable Raiders snapback hat was as good as a middle finger in the ’90s; short-hand for hip-hop and anti-establishment swagger. If you couldn’t find the real thing at a Big 5 Sporting Goods or some long-gone apparel chain, there was always the gas station or the Coliseum parking lot. After all, it was just white lettering on a black background. Resale sites like eBay are crawling with bootleg Laker shirts from the ’80s, especially ones that sellers claim are authentic misprints or preprints of Laker three-peat gear from 1989. Was someone trying to offload these in front of the Forum Club after the Pistons buried the Showtime era in Game 4? Probably. Would I wear one of these today? Absolutely.

Not all bootleg merch is created equal, though; some are better than others. The key to a great bootleg shirt isn’t that it’s a pristine re-creation of the real thing but that it’s got character or some odd story attached to it, like those three-peat shirts. Usually, the manufacturers do their absolute best to make their goods resemble the legit stuff. The shirt is a bit itchier, the ink might peel or the colors could fade faster than normal, but it’s close enough. Last week, I purchased a very passable L.A. Football Club shirt and a scarf from the Koreatown vendor, who was kind enough to offer me a bag (for free) so I could stop for a burrito on the way home. It’s a fine shirt, but it’s not going to make someone on the street stop and ask, “Where did you get that?”

The underrated beauty of bootleg merch reveals itself in the details. Sometimes it’s clear that the makers are more concerned about being sued than they are about correct spelling or punctuation or color. My 3-year old son has a shirt so uninspired that it just has the words “Los Angeles” on top of a basketball. At least I think it’s a basketball. Honestly, it could be a baseball or a crude drawing of Charon, the largest moon of Pluto. At least the ball-like design is purple and the letters are gold, so you kind of get what they’re going for. My friend Amir owns a “Lakers” shirt with the outlines of three heads. One is presumably LeBron James, the second is Anthony Davis. The third is a balding white man who I think might be coach Frank Vogel, a suddenly not-bald Alex Caruso or perhaps the shirt designer’s cousin. I wish I knew who to ask.

Bootlegging has become such an accepted part of American commerce that the big brands themselves are getting involved, hoping to capitalize on the sense of individuality and scarcity implied by something made illicitly. We consume to tell the world who we are, or at least what we want to make people think we are. Balenciaga and Vetements designer Demna Gvasalia bent the high-fashion world to his will by leaning into a look that felt consciously inauthentic, that rebelled against subtlety and embraced the counterfeit look of the knockoff industry. By appearing more fake, his clothes felt more real. Some designers became so enamored with the bootleg aesthetic that they slapped the word “Fake” on their own clothes.

The internet has made L.A. merch bootlegging even more appealing to both the intrepid entrepreneur and the consumer. Sites like Doyers Foo and ecrowns produce edgier, streetwear-focused designs that pay homage to the Dodgers fan culture with limited-edition shirts and hats sold on the e-commerce portal Big Cartel. Wisely, the Dodgers franchise takes a hands-off approach to retailers like this, presumably because it knows it’s not worth alienating your best customers because they really want a pouting Joe Kelly hat that you’ll never make anyway.

The sports merch bootlegger reminds us who truly owns our culture. While billionaires, corporations and leagues technically own the signs and symbols we affix to our chests or our heads — the Lakers franchise is valued at almost $5 billion — the bootleggers of Koreatown and Westlake/MacArthur Park are claiming a tiny piece of the city for all of us. The city can feel like a sprawling mess when you first come here, but a Dodgers T-shirt or a Lakers hat is a language we all speak. The jagged fonts and bleeding colors of the bootleg shirt might not be built to last longer than a few years, but what they mean to the city will.

Dave Schilling is a writer, humorist and appreciator of fashion whose work has appeared in the New Yorker, the Guardian, New York Magazine and GQ. He is also the host of the “Galaxy Brains” podcast.

How to Handle This Job-Interview Question: Would You Rather Work From Home or the Office?