In the end, it came down to two laps. And Marcus Ericsson remained on top to win “the Greatest Spectacle in Racing.”

Jimmie Johnson crashed with six laps to go in the Indy 500 on Sunday, leading to a red flag with Ericsson leading Pato O’Ward and Tony Kanaan, the 2013 winner, by a two-second-plus margin.

Instead of crumbling, Ericsson met the challenge. Following the restart, the Chip Ganassi Racing driver crossed the finish line first in the two-lap showdown to win the 106th running of the Indianapolis 500. He and Kenny Bräck are the only drivers from Sweden to win the race.

Ericson, 31, started fifth Sunday, behind teammates Scott Dixon and Alex Palou, Rinus VeeKay and Ed Carpenter, after a dominating performance by Ganassi drivers in last weekend’s qualifying. And while Dixon and Palou had miscues that took them out of contention, the Swede remained steady until the end.

Ericsson entered Sunday with two career IndyCar wins. Both came in 2021, at Detroit and Nashville, respectively.

Dixon, the six-time IndyCar Series champion started on the pole for the second consecutive 500 and the fifth time in his career. The 41-year-old from New Zealand, who won his lone Indy 500 in 2008, traded the early lead with Palou, the reigning series champion, in a plan by Chip Ganassi Racing to conserve fuel for both drivers. Palou was the runner-up last year to Helio Castroneves as the Brazilian won his record-tying fourth 500.

But disaster struck for Dixon while pitting on lap 175. He was assessed a pit-road speeding violation and his fortunes never recovered. Dixon moved into second place all-time on laps leading the Indy 500, ahead of Ralph DePalma.

VeeKay, who started on the front row next to the Ganassi pair, brought out the first caution on lap 39. Following a slate of green-flag pit stops, the 21-year-old Dutchman passed Dixon on the track to take over second behind Palou. But a few laps later, VeeKay spun in Turn 2, crashing hard into the outside wall in front of Dixon, who went down low to avoid the No. 21 Ed Carpenter Racing Chevrolet. VeeKay finished last in the 33-driver field.

Thirty laps after Veekay’s incident, rookie Callum Ilott crashed in nearly the same spot — just as green-flag pit stops had started again. The 23-year-old Juncos Hollinger Racing driver spun on Lap 69, smacking into the outside wall before careening down the track and slamming into the inside wall in Turn 2.

The caution flag flew just seconds before Palou hit pit road. The Spaniard was forced to continue down pit road without stopping and return to the track, but with his fuel running out, Palou had to make an emergency stop with pit road still closed. Palou was hit with a penalty and had to restart at the back of the field.

Turn 2 struck again on Lap 106 as Indy 500 rookie and Formula 1 veteran Romain Grosjean lost his back end and spun into the outside wall in nearly the exact same spot that VeeKay and Ilott crashed. 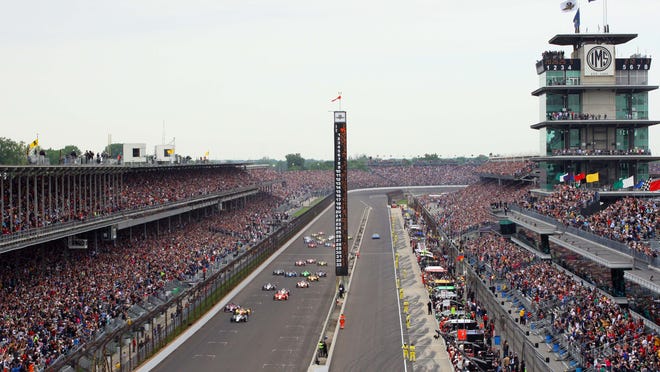