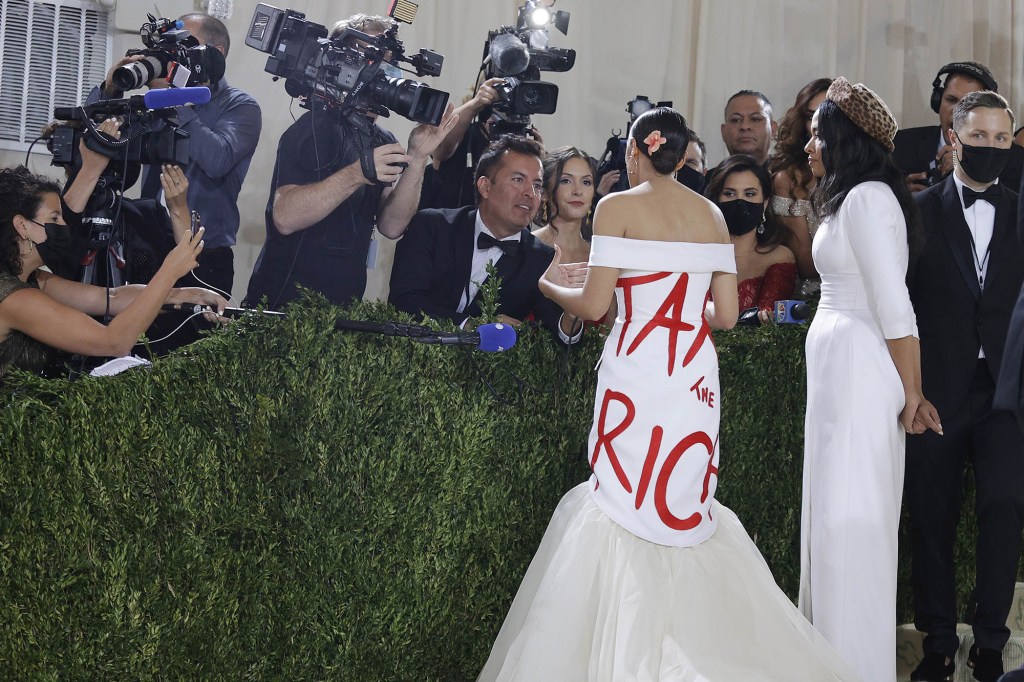 Is Big dead? HBO drops ‘Sex and the City’ revival ‘And Just Like That’ teaser

The Issue: Rep. Alexandria Ocasio-Cortez’s dress that featured the message “tax the rich” at the Met Gala.

What extremist, left-wing provocateurs fail to realize — out of blind narcissism or pure stupidity — is that their shenanigans trivialize their own causes and allow normal people to dismiss what they supposedly want to call attention to as unimportant.

Sen. Joe Manchin was wrong in calling AOC a “young lady.” She is no longer young and is surely no lady.

Tell her to wear her “tax the rich” dress in the House and the Senate. There are a lot of people in both houses who got rich as politicians — not working in real jobs.

AOC should have accessorized her outfit with a golden purse to enrich her cause by collecting said taxes — one wealthy attendee at a time.

How ironic that someone who screams about socialism would patronize an event that epitomizes capitalism, high-brow culture and very expensive couture. Let them eat cake!

Let’s be fair to Ocasio-Cortez — the ludicrous sight of a self-professed socialist hobnobbing at a party where a ticket costs more than the average American’s annual wage is not hypocritical.

Since the days when filthy-rich Hollywood actors carried Communist Party messages, “rule for thee, but not for me” has been at the very heart of left-wing thought.

They sanctimoniously preen their own virtue while browbeating the actual public into humble obedience. AOC’s grotesque exhibition is not hypocritical because it is socialism working exactly as intended.

Halloween came early to New York this year. The Met Gala used to be the most elegant event; now it’s all about who can have the most outrageous costume.

As far as AOC and that stupid “tax the rich” dress is concerned — it takes guts to wear that at a $35,000-per-seat event. Remember: Beauty fades, but stupidity is forever.

As if he hadn’t already proven himself to be the most divisive schools chancellor New York City has ever seen, Richard Carranza now shows us how duplicitous and despicable a person he really is (“Don’t Let Carranza Off the Hook,” Editorial, Sept. 13).

His erroneous doctrine on how kids should be taught to think and his push to lower entry standards in the specialized schools had parents combatting parents.

Now we learn he installed his protégé, Raquel Sosa, in a cushy Department of Education job, dumped his wife and then shacked up with Sosa.

Furthermore, he has totally flouted his parting DOE agreement and created a conflict of interest with his present job. Where is instant karma when you need it?

Did anyone believe the nonsense his DOE bureaucrats spouted?

Want to weigh in on today’s stories? Send your thoughts (along with your full name and city of residence) to letters@nypost.com. Letters are subject to editing for clarity, length, accuracy and style.

Opinion | Is same-day voter registration good? Yes. Is it essential? Probably not.

Is Big dead? HBO drops ‘Sex and the City’ revival ‘And Just Like That’ teaser