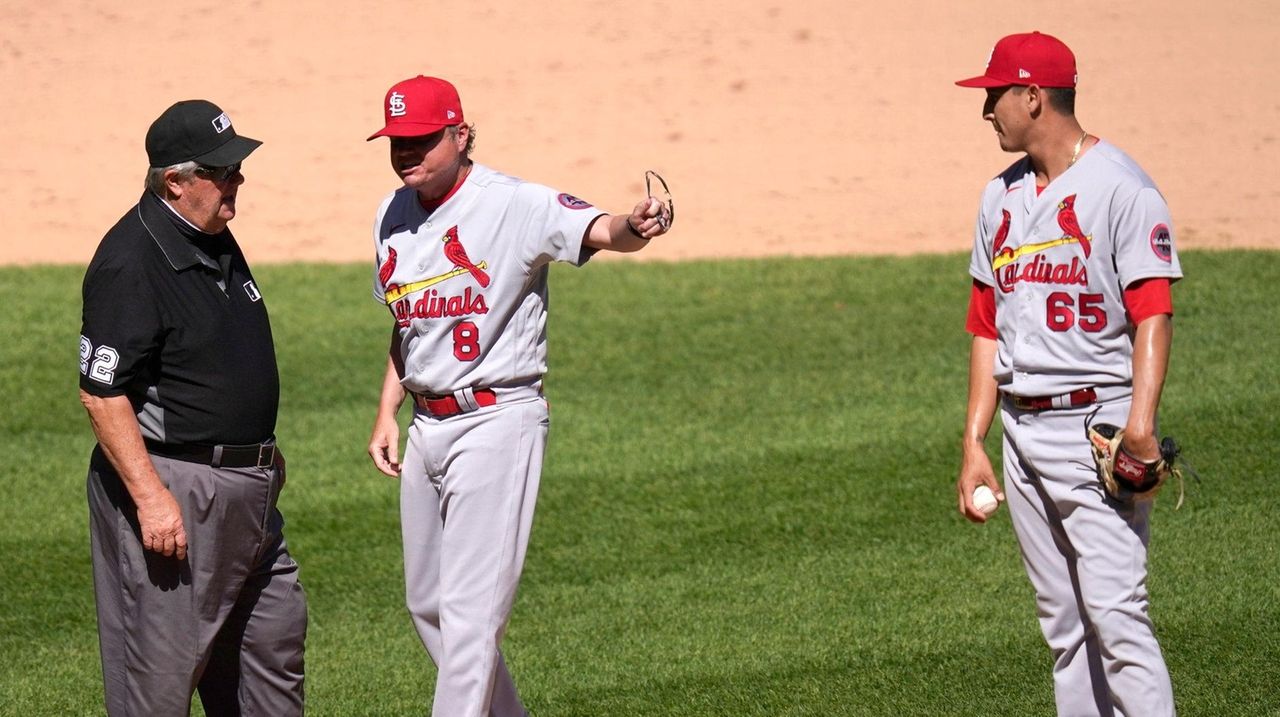 Thursday’s meeting of the MLB owners had a relatively new topic on the agenda but a fairly old problem: the increased scrutiny of the use of illegal substances by pitchers.

According to a source, the group went over the evidence collected during the first two months of the season — baseballs, caps, spin-rate data — and reached the obvious conclusion that yes, these sticky concoctions are helping to further erode a hitter’s ability to even make contact, a key element of the sport.

But that was the easy part. It already was common knowledge among everyone inside the game.

The hard part is the pledged crackdown that supposedly will follow.

Just like PEDs, which had always been illegal before MLB actively worked to penalize players for using them, the use of sticky substances beyond the allowed rosin bag to doctor the baseball already is in the rulebook as a banned activity. But rules have no meaning if they’re not enforced, which then creates a permissive gray area that players and teams are more than willing to exploit for a competitive edge.

In this case, the practice has become so widespread that some, such as Cardinals manager Mike Shildt and the Dodgers’ Trevor Bauer, have suggested that pitching staffs would be wiped out if MLB chose to punish everyone who used the substances, be it a sunscreen/rosin mix or some other customized tacky brew.

Still, ESPN reported Saturday that umpires will be instructed to “repeatedly and randomly” check pitchers during games, as Joe West did last month in confiscating the cap of Cardinals reliever Giovanny Gallegos, a bold move that sent shock waves through the league.

One notable detail: the run-up to the crackdown reportedly may take as long as two weeks to implement, which could serve as a window for pitchers to clean up their act.

What is MLB supposed to do? Start ejecting and suspending some of the game’s biggest names — or, at a minimum, publicly shaming them as alleged cheaters by confiscating their hats, gloves or belts in the middle of a game? That would seem to be the last thing the sport needs right now as it struggles to fight for fan dollars and attention in an increasingly competitive entertainment marketplace.

Eventually — if we’re not to that point already — this is going to create a rift in the clubhouse between hitters and pitchers. Teammates want to protect their own, of course, but how can they shrug off the practice among locker neighbors and then rail against opponents cheating?

Still, a couple of whistle-blowers have come forward lately, including the Twins’ Josh Donaldson and the Phillies’ J.T. Realmuto, saying the illegal practice has to stop. That’s fine to bring up generally, but it gets more problematic when actual names are mentioned. Nobody wants to go there despite how much their own livelihoods may be threatened by the behavior.

“Those are all good questions,” Brett Gardner said this past week. “I’m more of kind of stand back and see how things play out. I think it’s something that’s going to get taken care of one way or another — whether it be amongst the players or something else happens, whether it’s sooner or later.”

Gardner, a 14-year veteran, has seen it all by now. His reluctance to get too worked up about the issue — even with the end of his career in sight — underscores just how radioactive the subject is. Teammate Gerrit Cole not only has been accused in the past of using extra substances but also has come up in emails — along with the Astros’ Justin Verlander — requesting a special concoction from a since-fired Angels clubhouse staffer.

If you look closely enough, the shadowy practice is right there, in plain sight. Dark smudges at the center edge of a cap. Routinely touching a forearm or glove between pitches. Data-wise, there are the skyrocketing spin rates, which have been directly linked to the supernatural grippiness applied to the baseball.

MLB probably hoped that its initial warning toward the end of spring training might be enough to passive-aggressively contain the viral problem of sticky substances. As they discovered Thursday, however, that didn’t happen during the first two months of the season. Now, with the ESPN report of a more vigorous crackdown coming, MLB no doubt wants the offenders to curtail the behavior on their own rather than risk being outed on the public stage.

That would be the best-case scenario for the sport, as MLB really can’t afford another round of noisy cheating scandals (and subsequent trials) after what it already has endured in recent years. But if this doesn’t go away quietly, Rob Manfred & Co. won’t have much of a choice. The existential threat is too great.

In a word, they’re stuck.

When will it end?

Why Diamondbacks TV analyst Bob Brenly felt compelled to mock Marcus Stroman’s do-rag (the head covering beneath his cap) is a question he’ll presumably address during his voluntary leave of absence for sensitivity training.

Seeing Stroman pitch Tuesday night, Brenly remarked, “Pretty sure that’s the same do-rag that Tom Seaver used to wear when he pitched for the Mets.”

Stroman later shot back on Twitter, blasting the “racist undertones” of Brenly’s statement, and the Diamondbacks’ own Jon Duplantier, a Black pitcher, spoke more expansively about the damaging impact of what Brenly described as a “poor attempt at humor.”

“The most disappointing part is that though there has been a ton of progress and work done so that I, Marcus and other guys that look like me can show up authentically like ourselves and be ourselves on a big stage, comments like the one that was made, they put us back,” Duplantier told reporters. “They put that progress back.

“The youth, the future ballplayers that are coming up that are watching Diamondbacks games, that are watching Mets games, that are watching MLB games in general, and hearing that comment and potentially look at baseball and think they cannot be themselves, and that hurts. That hurts me. That hurts me as a, shoot, I want to be a dad someday. And so knowing that the work that is continuing to be done is so that kids, my sons, my daughters, can grow up knowing they be authentic with themselves, it hurts when comments are made that potentially can hurt that.”

Not that MLB was lacking for examples, but Brenly’s “joke” was just another reason why the sport needs more diverse voices and perspectives, as Duplantier so perfectly expressed.