Law Roach, a Stylist Whose Best Creation is Himself 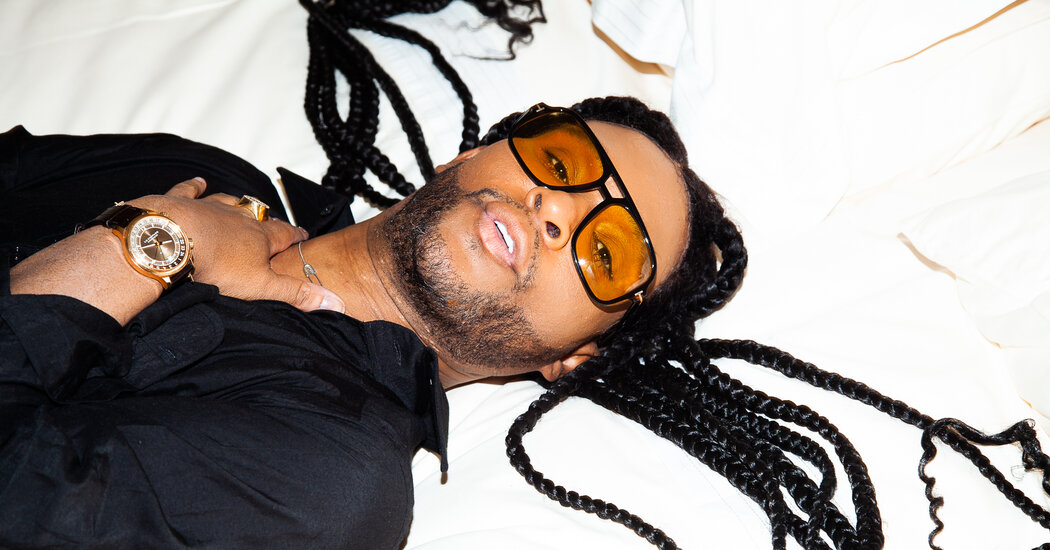 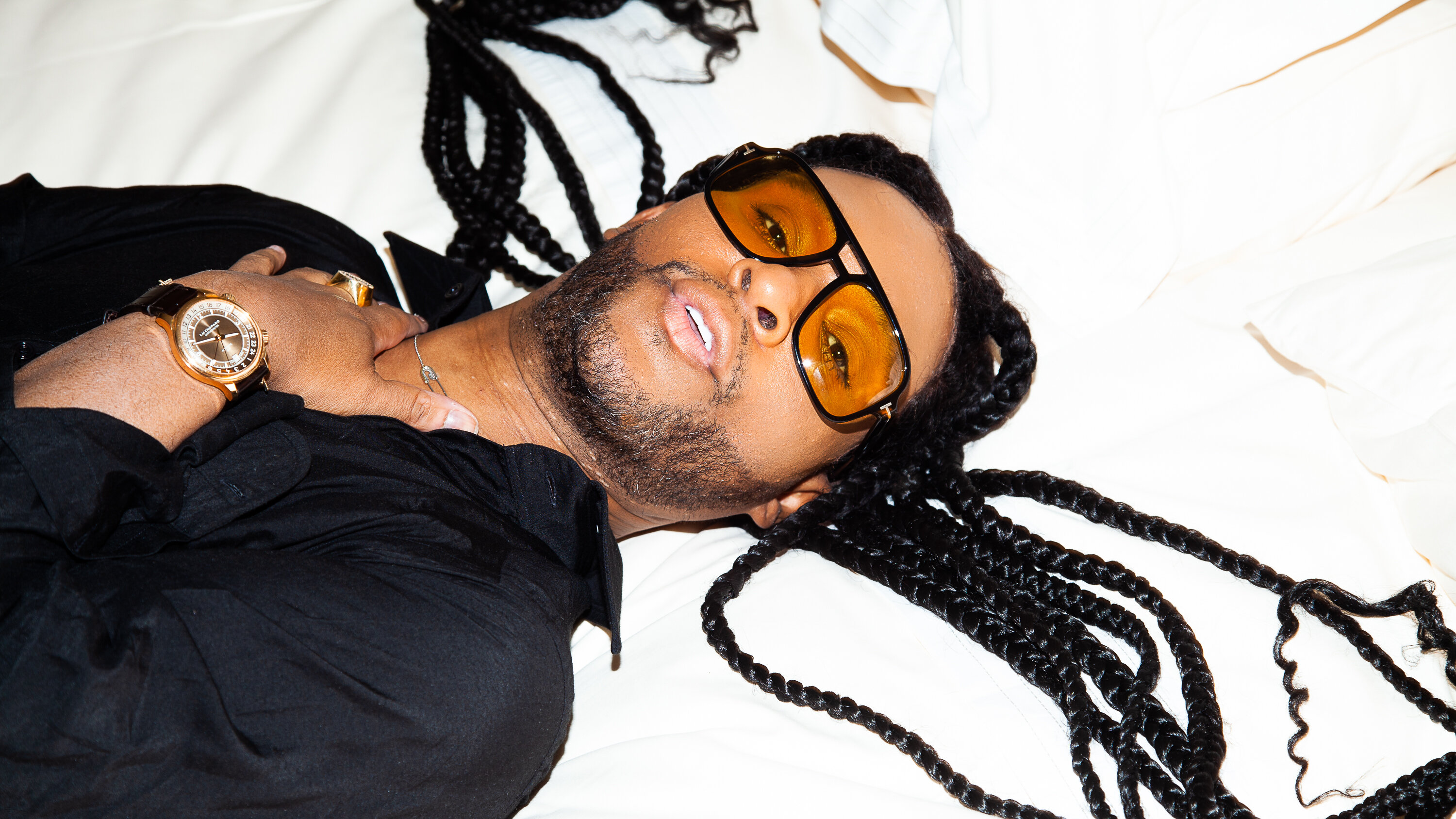 “Can you see how long it’s going to take me to get there,” the celebrity stylist Law Roach asked his publicist Sunday night, while seated in the bathroom at the Mark Hotel on New York’s Upper East Side, getting a touch-up in advance of the Tom Ford show.

Though it was now 7:42 p.m. and the show was scheduled for 8 p.m. across town at Lincoln Center’s David Koch Theater; though the Met Gala was less than 24 hours away and several of Mr. Roach’s clients had outfits still unfinished; though he had not even selected his own gala get-up, or even changed into the one he was about to wear to Mr. Ford’s show, Mr. Roach was calmly drinking peppermint tea.

“No caffeine, no cocaine,” he said. “Just adrenaline, love and passion.”

His publicist used her phone to gauge the traffic and got an estimate of 13 minutes, which according to the laws of fashion, meant Mr. Roach was basically running ahead of schedule.

“It’s not going to start on time, it never does,” said Mr. Roach, who has braided hair, is fashion world-thin and at that moment had on a long gothic Nike skirt and a white V-neck T-shirt.

A little more than a decade ago, Mr. Roach said, he was living in the Bushwick neighborhood of Brooklyn (“when it was still Bushwick, not east Williamsburg”), sneaking into fashion shows at Bryant Park, and “mopping” (ballroom scene-speak for stealing) clothes from Gucci, Tom Ford and Tommy Hilfiger at department stores.

Today, he styles celebrity covers for W and InStyle, and has a client list that includes the singers Halsey and Celine Dion, the racecar driver Lewis Hamilton (whose table at the Met Gala would be all Black creatives, including Mr. Roach), the actress Kerry Washington and the comedian Tiffany Haddish.

Recently, a man began texting Mr. Roach claiming to be Stevie Wonder. For obvious reasons, Mr. Roach thought he was being catfished and didn’t respond. But it was Mr. Wonder and it’s now looking likely they’ll be working together too.

For the last year and a half Mr. Roach has also starred on the HBO Max series “Legendary,” a kind of “RuPaul’s Drag Race,” in which some of the ball scene’s biggest houses — The House of Saint Laurent, the House of Ebony, The House of Ninja — compete for runway supremacy.

As a Black teenager growing up on the South Side of Chicago with a mother he said was addicted to alcohol and drugs, there was no exposure to the world in which he now freely circulates.

“The only magazines in the house were Essence, Ebony and Jet,” he said, changing out of his skirt and into a dark Tom Ford suit and floor-length leopard-print coat. On his wrist was a gold watch from Chopard, given to him by Chopard. On his middle finger was a gold Jacob & Co. ring, given to him by Jacob & Co. It said “Law” in all caps.

“For my generation these jobs weren’t viable,” he added, slipping on a pair of Rick Owens boots that would later be taken off his feet by an assistant. “The way it worked was, you go to school, you become whatever you need to be to get benefits for 40 years. That’s what we were told, so that’s what we tried to do.”

That was why, after finishing high school, Mr. Roach attended Chicago State University, where he said he got a degree in psychology. Then he decided to open a used clothing store in his hometown, Deliciously Vintage.

Sometime around 2010, a friend introduced him to Zendaya, then a 13-year-old actress who got cast on the Disney Channel sitcom “Shake It Up.”

He began dressing her; they became inseparable. He also became an avid viewer of “The Rachel Zoe Project,” a reality TV series on Bravo that centered around the Hollywood stylist Rachel Zoe Rosenzweig, who reached the upper tier of the business not by crafting high concept shoots for magazines, but by plunking clothes onto tabloid fixtures such as Nicole Richie and Lindsay Lohan and watching them sell right out.

Many in the business held their noses. Mr. Roach, who saw it as the ultimate story of what was possible, headed to Los Angeles and hustled to build his client list.

In 2017, Ms. Dion’s reputation as the queen of schmaltz was due for a makeover. After she attended the couture shows in Paris that summer, wearing a series of outfits one more outrageous than the next, other clients joined his roster: Chance the Rapper, Mary J Blige, Ariana Grande and Ms. Haddish.

Instagram took power away from the magazines, which had seldom allowed celebrities to select their own stylists. Now, people were realizing that the way through to Mr. Roach’s diverse client list was often Mr. Roach.

Some of his relationships — including with Ms. Grande — were transitory. Celebrities are fickle, particularly with people in the service industry who become their own best creations. For a time, his association with Ms. Dion faded, though he’s apparently back with her to work on her upcoming Vegas show.

He even worked a couple of times with Anne Hathaway, whose previous stylist, Ms. Rosenzweig, had not exactly greeted Mr. Roach with open arms. “I’m not going to say I was let down,” he said of meeting Ms. Rosenzweig. “I wouldn’t say she was not nice.”

The clock at the Mark was nearing 8 p.m. On the bed next to Mr. Roach was a pink, crocodile Birkin bag and a Chanel jacket that had been tossed aside like a used T-shirt.

“I can’t deal with this,” said his publicist, placing the jacket on a hanger.

Mr. Roach’s phone rang. It was Mr. Hamilton’s manager informing him that Mr. Hamilton, who had been in an accident over the weekend, was headed to the airport and would be in New York around 5 a.m.

The door buzzed and Mr. Roach answered it. “My videographer,” he said. “Well, actually Lewis’s.”

He told the man, “too late,” and sent him away.

Soon he was ensconced in an Escalade bound for Lincoln Center, holding a custom Tom Ford face mask he would forget in the car, a debit card he’d later leave at a hotel bar and a Birkin bag that stayed in his possession mainly because of the diligence of his 20-person-plus army, who kept calling him on two cellphones (one would disappear that evening).

There were last minute changes happening with Met Gala guests. And delays with tailors. Over FaceTime, Mr. Roach and his assistant, Cassy Meier, bickered about a fabric swatch.

“I didn’t ask for black and gray,” he said, as Ms. Meier held up what she had. “I asked for black or gray.”

Ms. Meier moved the garment around and Mr. Roach spotted a shade underneath that he liked. “What’s that?” he said.

“Well, make it out of the rug,” he said. “And please, for the next few hours, every piece of information needs to go through you. That way we don’t make mistakes.”

Interns, he went on, were causing more problems than solutions.

The car zipped down Central Park West. Asked what type of boss he is, Mr. Roach answered with one word: “Tough.”

With only faint rue he told of going to Paris for the shows and not bringing Ms. Meier with him and having her leave afterward.

“Did you see ‘The Devil Wears Prada’?” he said. “That’s exactly what it was.”

The car reached Lincoln Center. Mr. Roach stepped outside and was greeted by clipboard-wielding young women in black. “I forgot my mask,” he said, adding a profanity. Thankfully, the staff had others at hand.

Photographers lined up to take his picture. Fashion students pressed against barricades screamed his name. “He’s Zendaya’s stylist,” one said, as Mr. Roach posed for pictures.

Another yelled directly at him: ‘“I love your hair.” To which he replied: “I love your face.”

When he stepped inside the David Koch Theater and headed up a single flight of stairs, it became clear he was right on time.

Guests mingled outside on a terrace, sipping cocktails. Mr. Roach was greeted by Sally Singer, Amazon’s head of fashion direction; a Hollywood agent who wanted to set him up with a client; and Jennifer Hudson, whom Mr. Roach had recently spiffed up for InStyle.

“Happy Birthday,” he said to her.

“The new 20,” he said. (Mr. Roach claimed he was 35, his publicist later said 36, and various published reports place the self-described “image architect” in his 40s.)

Around 8:30, he headed to his seat, the lights went down and a cavalcade of models in Studio 54-inspired ready-to-wear began parading across the room.

When a male model dressed in glittery gold passed by, Mr. Roach—who ricochets between indifference and exuberance, by turns utterly blasé and beyond everything— started clapping. “I discovered him,” he said. “He was my nurse at urgent care. Now he’s the face of Tom Ford men’s wear!”

With his car stuck in traffic nearby, several Black college students in monogrammed Vuitton and Dior clothes sensed an opportunity to ask Mr. Roach for photographs and career advice.

He was friendly to all — somewhat surprising given that on “Legendary,” he seems to amp up his imperiousness, searing contestants who work his nerves and fail to bring it to the floor.

“I’m the Simon Cowell figure,” he said. “I don’t feel bad about it. Everything I do comes from passion. I want everybody to be great, and unfortunately somebody has to go home. That’s just the way it is. If you get an opportunity, be ready.”

The car pulled up and took him to the Plaza Hotel to meet Alton Mason, a model, for a late night fitting. Mr. Roach had been talking about what else he wants to accomplish. His own show. His own clothing line. Interiors.

In short, he said: “Everything.”

Why more professional athletes are depending on cannabis

A Multifaceted Designer Gets a New Platform

Jeff Probst Is the Ultimate ‘Survivor’

Opinion | Every Supreme Court speech from the past few weeks, but ‘partisanship’ is ‘a rodent problem’