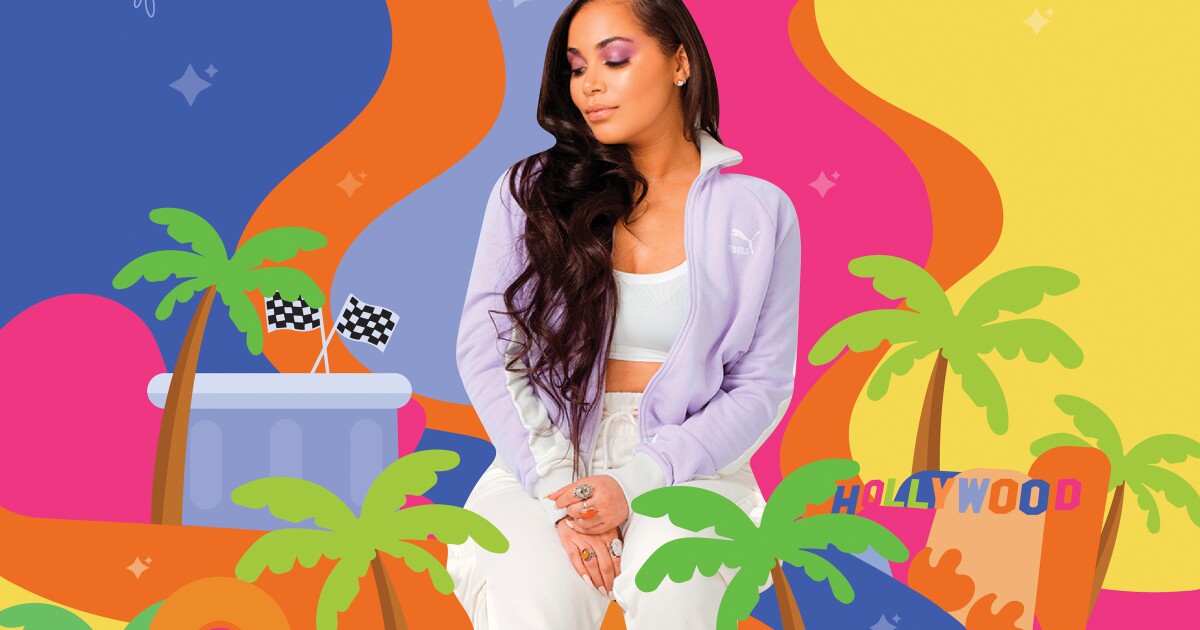 Lauren London is an early riser. In L.A., choosing not to sleep in is a spiritual practice. Seven o’clock and you’ve already missed the morning sunrise lighting up the marine layer. Eight o’clock, the traffic is already rush-hour thick. “I try to wake up an hour before I have to wake up,” she tells me. “I have definitely found that when I actually give myself space to wake up, I’m actually better.”

London approaches the day with intention: prayer, meditation, tea, reading, parenting. She doesn’t have a beauty routine per se. But she washes her face twice a day, morning and night, and doesn’t eat many sweets. (“I’m not a skincare junkie because I’ve learned that when you switch it up too much it messes up your skin,” she says. “My most expensive face-care stuff is La Mer moisturizer.”) Currently, she has braids, making hair one less thing she has to think about in the morning. “Whatever feels easy,” she says. “I think that’s where I’m going right now.”

Healing is a process that requires practice. Consistency. It’s been more than two years since the death of rapper, entrepreneur and activist Nipsey Hussle — born Ermias Joseph Asghedom — a loss still felt around the world, particularly in L.A. proper. As Hussle’s partner since 2013, London has been working through it. “I think when really hard things happen to people it’s just hard to think that life will ever be sweet again,” she says. “So that’s something that I’m learning again, is how to do that.”

London has always been spiritual. Her aunt once told her “to always work on my spirit ‘because people are way more attracted to spiritual qualities whether they know it or not.’” London has kept this in mind over the years. But recently she’s learned that what makes the difference, particularly when it comes to confronting the reality of living, is “the actual practice” must come from a deeper place. “I felt that material-wise, I had kind of just lost everything,” she begins:

“I lost what I would say is the love of my life. … So I had to go so deep within myself. I was so in a dark space and it was just like, ‘What is this? Who am I? God, please show me.’ … When you’re facing God face-on, you’re asking real questions and you want real answers. It wasn’t for play. I really wanted to know what was going on. So, I think it just has expanded because of my quest for peace.”

After Hussle’s death, London hasn’t taken acting roles simply to maintain. Her spiritual practice simply doesn’t allow for it any longer. But she makes time for the right role. Recently, while sitting in traffic, London received a text from actor Michael B. Jordan, about a part for which he thought she’d be perfect. He was apologetic, hesitant to reach out, but he felt it would’ve been worse if he didn’t ask her. After reading the script of “Without Remorse,” London agreed. She left her two sons for 10 days to play Jordan’s wife, Pam Kelly, who is killed by Russian operatives. It wasn’t the typical girl-next-door she has played but she could share her experience in a different way. “I really related with [him], his character, his pain and his sadness. I was like, ‘Wow, here I am in the depths of my grief, and there’s a project that I can actually give something to. Maybe I can give him insight on what that really feels like.’”

At 36, London is as wise as she is generous. She’s remained grounded in an industry built on the superficial. She has roughly 9.5 million followers on Instagram, but she doesn’t post much.

Most people were introduced to London out of context. She is from Black L.A., but audiences met her as a native of a different city when she starred as New New in the 2005 coming-of-age cult classic “ATL.” She was 20 and it was her first major role on the big screen. She had made other appearances on camera, though, most notably in the Neptunes’ Paul Hunter-directed “Frontin’” video in 2003. In it, she wears a green, loose baby T-shirt and low-rise cargo jeans. Her brownish hair is in a messy half-up-half-down style. With only a glossy lip, she is barely wearing any makeup.

In both “ATL” and “Frontin’,” London captured something innate, genuine. She had a confidence without the bells and whistles that was alluring. You wanted to be that laid-back, show-up-to-a-party-with-not-every-hair-in-place, no-makeup person. Someone who didn’t need to present herself as perfectly fixed-up.

Both appearances crystallized the types of roles she’d be known for in the next 16 years — the “regular” Black girl. “Oh, I was regular!” London says of the casting in “Frontin’.” “I was 17, 18 years old, living at home with my mom. I think I was like, ‘How much is it?’”

She always loved acting; it was all London wanted to do growing up. She was often home alone. Her mother worked as many as three jobs at a time. She’d see her father, who lived in Las Vegas, on summer visits once a year.

The solo time helped cultivate London’s imagination. She loved classic movies — everything from “Funny Girl” (her favorite) to “Boomerang” to “Waiting to Exhale” to “My Fair Lady.” “I’m a classic head,” London says. “I just loved films, old films, and musicals growing up, and I would get lost in those spaces.” For a short amount of time, she joined the Amazing Grace Conservatory, a youth theater program started by Wendy Raquel Robinson and Tracy Lamar Coley in 1995.

As an actor, London doesn’t typically over-perform. Her eyebrows subtly signal how she’s feeling or what she’s thinking. She has deep dimples and a natural charm. Her hair is always fire.

London, who is biracial, often plays Black women who feel familiar. She doesn’t aim to be everyone to everybody. Her performance as New New captured a kind of early-aughts teen flyness that is now shorthand for cool. Almost all New New GIFs are from scenes that exude that energy (aside from the infamous clips in which T.I. rips the gifted necklace from around her neck). Big Sean rapped, “We smokin’ Lauren London/I thought you Nu-Nu,” on his 2007 mixtape.

London is a second-generation Angeleno. Her family arrived in the city through the great migration. Her grandmother was from Chicago, her great-grandmother from Mississippi. Her mom — who went to Crenshaw for a year before transferring to Dorsey — was the first in her family born and raised in L.A. (“My mom was an original L.A. baby,” she says.)

Growing up, London moved around a lot. “I have memories all over L.A.,” she says. She remembers riding through the Jungle as a little girl to visit her aunt. Hanging out with friends in the Dons after an audition. Grabbing a quick bite to eat at Tito’s Tacos after school. The day her mom moved them in with her grandmother in Pasadena, the Rodney King verdict had just been announced. “The day we were bringing our stuff inside, the television is on. And the riots had just broke out,” she recalls. Her friends still lived in L.A. though. Her mom still worked in L.A. too. “I remember driving through L.A. and you seen scorched buildings and liquor stores burnt down. I really got to experience it for real firsthand.”

Black L.A. in the ’90s and the aughts was intimate, connected. Think “Moesha,” “Friday,” “Baby Boy.” London beams with a lot of pride when she thinks back to that time. “You can listen to the music and wish you were from L.A. in the ’90s,” she says.

Many of her peers would go on to make their marks on the city. Rap artist Dom Kennedy was the homie. Her friend Danny Williams, who goes by Topshelf Junior and photographs her often, also was around. London’s best friend in elementary school was close with Jhene Aiko. London has known jewelry and clothing designer Melody Ehsani since they were in high school. “My peers have always been full of love,” London says.

Nipsey Hussle was much the same. They met in 2013, around the time Hussle famously sold 1,000 copies of his “Crenshaw” mixtape for $100 each. London bought copies as gifts for cast members of BET’s “The Game.” Then, as the couple later told GQ, she started following Nipsey on Instagram. He followed her back and slid into her DMs. Soon Hussle and London grew their lives together — partially out of a deep love of L.A.

“Nipsey made the biggest joke that L.A. was my gang, that I bang L.A.,” London says. The couple’s son, Kross Ermias Asghedom, was born Aug. 31, 2016. She decided to have him instead of taking a role on “Snowfall.” (London also has a son with Lil Wayne. Nipsey brought a daughter, Emani, to their relationship.)

Though their relationship was public — London and Hussle appeared on many red carpets together — there was something about their partnership that remained untainted by the celebrity industrial complex. Here were two people who possessed a type of realness — a kind of authenticity — that was synonymous with their public image. Yet you never quite knew the depth of what they had. London, in our conversation, seemed not only proud but thankful they’d found one another. They were partners in seeking more out of life and grateful for how they’d built theirs together.

When Nipsey was tragically killed, London reminded the crowd gathered at Staples Center for Hussle’s memorial of what they had and the fact that she would carry on that love: “My heart hears you, I feel you everywhere. I’m so grateful that I had you. I love you beyond this Earth. Until we meet again, the Marathon continues.”

These days, London is prioritizing herself and family. She’s been reflecting on her career and purpose. Even before she had any intimate experience with death, she thought deeply about why we are here. She attended a weekend seminar organized by holistic health practitioner Julie Burns Walker, which focused on better understanding our temporary time on earth and after. For London, who is endlessly curious, it was where she needed to be.

One lesson she’s learned since is embracing the smaller joys. “It’s little miracles that happen every day that we ignore,” she tells me in our last phone call.

“I always feel like as a Sagittarius, we are seekers,” I say to her. “We are always looking…” She cuts me off.

DH: I never thought of it that way, honestly.

Darian Symoné Harvin is a beauty and culture writer. She was born in Long Beach, Calif., grew up in Buffalo, N.Y., and lives in Los Angeles.

This British Salmson Is Nearly 90, But Still Spry Enough to Race