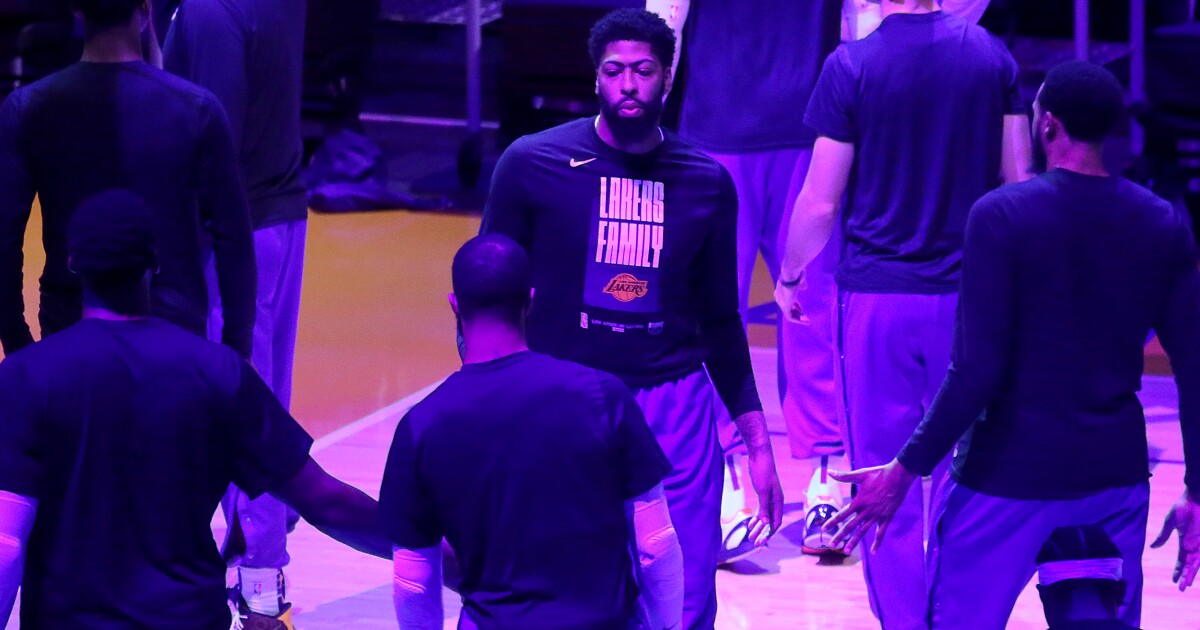 On his way into free agency, veteran Wesley Matthews made it clear that he wanted to re-sign, the pain from the Lakers’ unrealized potential after a first-round playoff exit forcing him to declare his desire to “run it back.”

While the Lakers universally said they thought this team was good enough to win it all had it not been for key injuries, roster changes are almost always assured.

The NBA is projecting a $112.4-million salary cap for next season, with teams spending more than $136.6 million subject to luxury tax penalties.

Here’s a quick look at who is under contract, who can walk in free agency and how the Lakers can keep some key role players.

Any roster building happens around this foundation, a good head start for the Lakers’ front office.

Davis signed his max deal last offseason, and James re-upped by signing an extension, keeping the Lakers’ core under contract without much drama. The question becomes how to surround these franchise players with the best supporting cast.

In Caldwell-Pope and Kuzma, the Lakers have two key rotation players who provide some shooting and defensive versatility on the wings. If the Lakers make a trade, these are the names you’d almost certainly hear in order for the team meet salary requirements. Gasol proved to be the most trusted of the Lakers’ centers, though he sounded like someone who could end up not coming back during his exit interview on Friday.

The ghost of contracts past

The Lakers still have some of Deng’s $72-million contract on their books after waiving him before the 2018-19 season. Next season will be the last time his name shows up on the team’s salary cap sheet.

Harrell’s player option is one of the most fascinating decisions of the Lakers’ offseason. Harrell followed up his sixth man of the year season with the Clippers by providing the Lakers scoring off the bench, but it was pretty clear the Lakers didn’t trust him defensively. That meant he was largely off the court against the Phoenix Suns in the playoffs. The question is, what’s his market if he opts out? Can he find a better situation where he’ll make more money? Charlotte was rumored to be interested last offseason, and the thought of Harrell running the pick-and-roll with LaMelo Ball and the Hornets’ guards is pretty interesting.

McKinnie’s team option is cap-friendly — he’s under contract for the next two seasons without any guaranteed money. In addition to being a perfectly fine end-of-roster wing, those non-guaranteed deals can be valuable in making the financial aspects of a trade work.

Now we get into the weeds. The Lakers will be over the salary cap, but they’ll be able to exceed that number to sign Schroder and/or Caruso because the team owns their “Bird rights” — a provision that allows teams to go over the cap to re-sign their own players.

Schroder turned down an extension during the season and has sought a deal paying him $100 million or more, but after an uneven playoff run, it’s tough to know his market value. The Lakers, because of their cap position, probably have to bring him back because they’ll be unable to replace him in free agency. A sign-and-trade could be a possibility, but that also has cap implications.

Caruso’s free agency could come down to factors other than money, with a bigger role possibly available elsewhere. However, he’s valuable to the Lakers and a good fit as a combo guard and two-way player.

Matthews, Morris and Dudley could return on veteran’s minimum contracts, while McLemore could seek more consistent minutes somewhere else.

The Lakers don’t have Bird rights for Drummond, a late-season acquisition they said they’d like to keep, and without cap room, they’d likely need to use a cap exception to sign him. They could give him a deal similar to the one they gave Harrell a year ago or they could use a mid-level exception, projected to be worth around $6 million per year. However, Drummond has commanded more than $20 million per season each of the last few years.

The Lakers have the right to match any offer Horton-Tucker gets in free agency, though the team might not want to let it get that far by signing him to a deal before he accepts an offer elsewhere. The Lakers clearly want to keep him, but it could be costly. Like Caruso and Schroder, the Lakers have Bird rights for Horton-Tucker, but keeping all three could be incredibly costly, both in limiting roster flexibility and in the luxury tax bill the team would face.