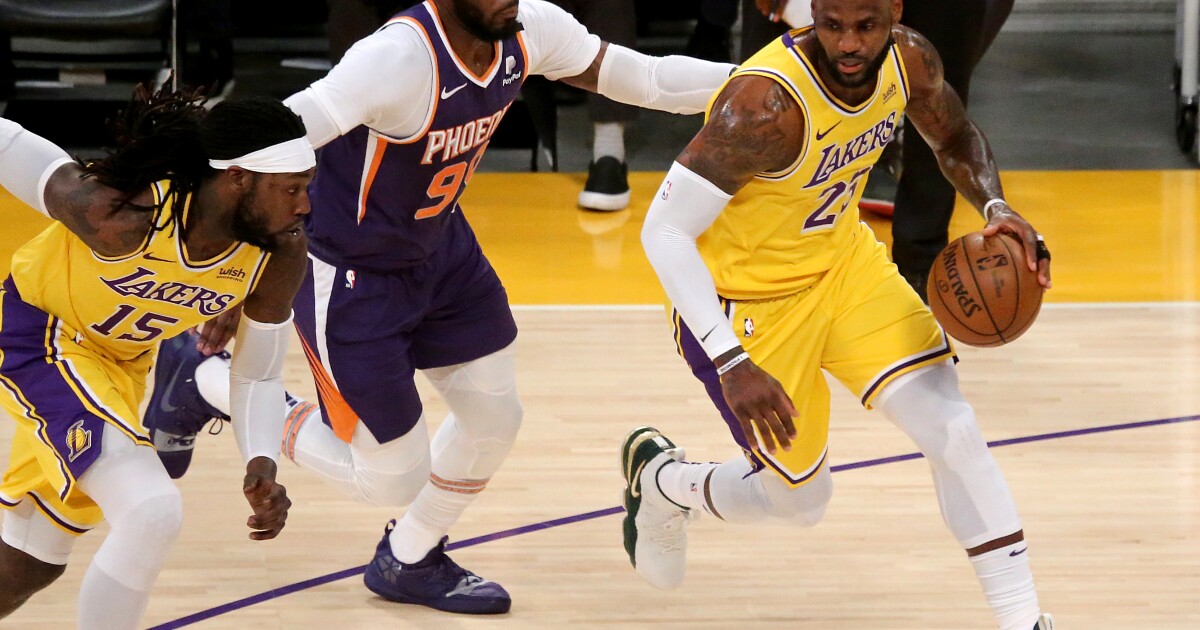 Kobe Bryant wrote the words to Devin Booker on a pair of sneakers. Booker inked the words in Bryant’s handwriting on the inside of his arm. And Thursday, it was Booker, and not LeBron James or Anthony Davis, that was able to love the motto.

Bryant knew. Now the the Lakers do too.

Booker scored 47, punctuated with a dunk, the Suns eliminating the Lakers in six games with a 113-100 win.

The Lakers season ended Thursday night, the team unable to stop the series’ most explosive player who quickly turned Game 6 into a blowout early and helped the Suns hold off the Lakers, who became the first defending champs to get eliminated in the first round on their home floor since 1984.

The Lakers finally found some fight in the second half, cutting what was once a 29-point Suns lead down to 10 in the fourth, the silent Staples Center crowd suddenly feeding off the energy their team was playing suddenly playing with.

But the sense of urgency that Lakers veteran Markieff Morris said the team never could find showed up far too late, the early damage from Booker and the Suns enough.

It wasn’t without a top-line effort from James, who was checking himself in and out of the game for quick breathers, at one point skipping a seat on the bench after checking out because it’d be faster just to stay sitting at the scorer’s table.

He finished with 29 points in 41 minutes on 26 shots, the entirety of the Suns defense focused on keeping him away from the rim.

It helped the Lakers get back to the fringes of contention, but as the clock ticked down late, Phoenix guard Chris Paul held the ball and pumped his other fist, his injured shoulder not enough to keep the Suns from advancing.

Just like they couldn’t stop Booker, the Lakers couldn’t realize their vision for their team, the season finale a reminder of the problems they tried to fight all season and the ones they couldn’t find a way to correct.

While injuries ravaged the Lakers throughout the regular season, the team vowed to be patient, to wait for them to be fully healthy heading into the playoffs. It happened, for a glimmer, as they built a 2-1 lead over the NBA’s second-best team.

But if last year’s NBA title run was one of destiny, the team persevering through Bryant’s death, an unprecedented pandemic and a taxing bubble, this year’s season was about paying the tab.

Unable to build on-court chemistry, the Lakers crumbled under the most intense pressure they faced, getting blown out in their final two games of the season with Davis mostly sidelined.

“It basically derailed our run,” coach Frank Vogel said of the team’s injuries. “We did everything we could to fight through that, but ultimately it wasn’t enough.”

After sitting Game 5 because of a strained groin, Davis somehow got cleared to play Thursday. But within seconds, it was painfully clear.

The wince was the first clue.

Davis, the target of criticism over his durability and toughness, hobbled his way through the Lakers’ pregame layup line, barely able to push the ball up towards the basket. And after being introduced as a starter to a roar from the crowd, Davis walked into the players’ pregame huddle instead of leaping into it — breaking his typical pregame routine.

He played only five minutes before he had to point to the bench to confirm what everyone watching could see — that he wasn’t healthy enough to play. He finished with one rebound and one assist while not attempting a shot.

“He’s a warrior,” Vogel said. “…We knew it was going to be difficult for him to move.”

The Lakers trailed by seven when he checked out. Booker made sure that number was going to grow like a well-watered plant. He hit six threes in the first quarter without a miss, the makes tying an NBA record for threes in a playoff quarter.

They entered the second quarter down 22.

With Davis out, James was unable to carry the Lakers offense, the frustration from the empty possessions — missed shots and turnovers — wearing on him. It’s the first time in James’ NBA career he’s been eliminated from the playoffs in the first round.

“We knew the type of team we could be when we were healthy,” Davis said. “…We just never could take advantage of our full team, the team we knew we could be.”

As the Suns went into a timeout in the third quarter, James barked at Booker and Mikal Bridges before team officials separated them. But following the interaction, the Lakers found their fight, playing with an intensity and energy that they hadn’t had since late in Game 4.

Kentavious Caldwell-Pope, who missed Game 4 and had to be taken out of Game 5 because of his injured knee, had his best offensive game of the series, chipping in 17 points in the first three quarters.

And the Lakers run? It couldn’t be stopped for anything, even the NBA’s health and safety protocols. After on Phoenix turnover sent the ball into the stands, a fan threw it back to Morris, who asked “You vaccinated?”

The fan took out his card; the refs still changed the ball.

But the Lakers comeback ended much like the game started, with Jae Crowder hitting a three and putting a finger up to his lips to silence the Staples Center crowd that chanted his name when he bricked shots earlier in the series.

As he danced his way back up the court, the Lakers were left to watch, another team set to celebrate this summer with their trophy.

Lakers fans react to their season coming to an end with a loss to the Phoenix Suns on June 3, 2021, at Staples Center.