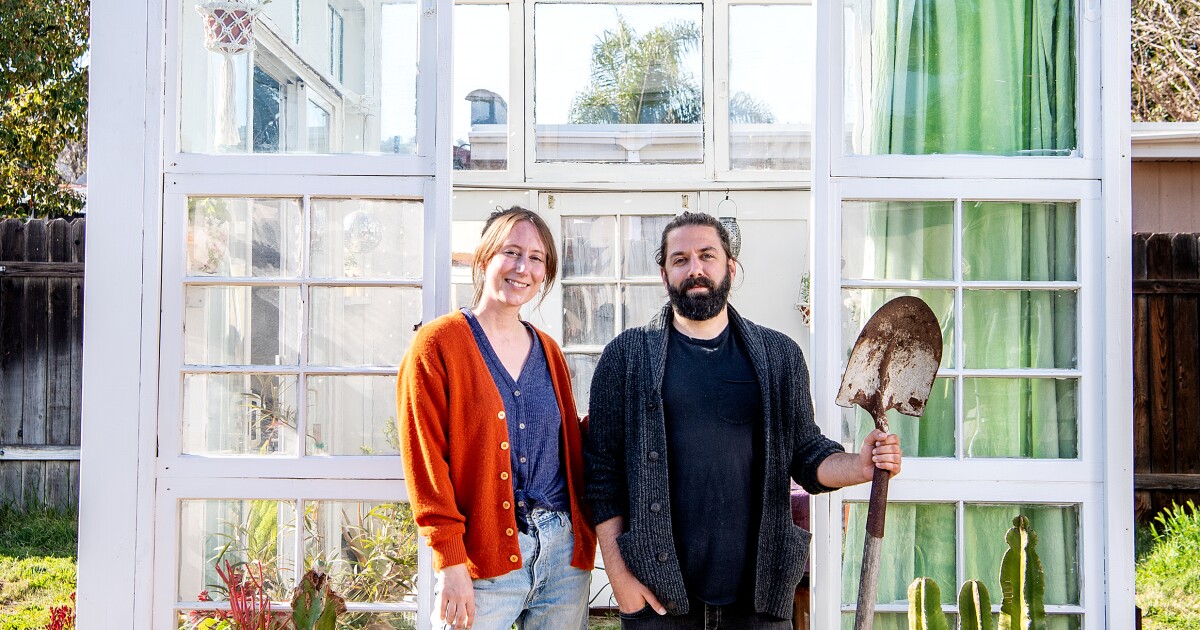 In early December, just as COVID-19 cases were spiraling in Los Angeles, Jennifer Grosso posted a request on her Buy Nothing Facebook group that struck a chord with her Atwater neighbors:

“If anyone has any old windows or doors they’d like taken off their hands, I’d be happy to come pick them up! I’ve currently got about half of what I need for a greenhouse. All conditions welcome, we’ll put some love back into anything that needs it. Would rather build from scraps than buy new (pics for reference) TIA!”

After nearly a year of illness, isolation and loss, Grosso’s simple request offered people the opportunity to do something they hadn’t in months: meet and make new friends. “People really wanted that sense of connection,” she said. “When I met people curbside, I could tell they really wanted to talk.”

With so many people turning to decluttering to deal with the stress of cabin fever — drop-off centers in Los Angeles were overwhelmed with donations at one point last year — here was someone who was willing to come pick up building materials that were collecting black widow spiders in the backyard.

After Grosso posted her request on Buy Nothing, a Facebook group where people lend and give away items to their neighbors for free, she spent two weeks traversing the streets of Los Angeles as she collected discards at the curb. She started with doors and windows, but after she posted similar requests on Nextdoor and TikTok, she was offered plants, curtains, a sunshade and lights from people inspired by her DIY project.

The more she traveled, the more the quiet 33-year-old manager of photographers learned about her neighbors and, ultimately, Los Angeles. She nearly drove off the side of the road at dusk in the steep hills of Mount Washington. She sampled Valerie Campbell’s homemade ice cream through a window in Glendale when she arrived to collect seeds and seedlings. Back home in Atwater, she carried an Ikea bed frame on her back and repurposed it as a raised bed planter.

And when the greenhouse was finished, it was ready for Instagram.

Grosso and her boyfriend, Trevor Morris, collected more than 75 windows and doors over two months. They ended up using 41 of them to create the structure — 8 by 15 feet and 11 feet high — and saved 12 to build cold frames, bottomless boxes with a transparent cover to protect plants from the elements.

“We thrive off of interacting with and collaborating with others,” Grosso said of the greenhouse that L.A. built. “Especially within our local neighborhood and community, and that was one of the primary reasons for creating the space — to be able to share it.”

When Debra Ferrara saw Grosso’s request for donations on Nextdoor, she was delighted to add her windows to the collective building blocks. “I had just put new windows in my 90-year-old childhood home in Glassell Park,” Ferrara said. “I saved the old ones hoping they could be recycled. Now when I look at Jenny’s greenhouse online, I see my windows and it makes me smile.”

Buy Nothing Atwater member Kirsten Eggers had long been meaning to build cold frames with the doors that had been collecting dust in her backyard. But when she saw Grosso’s post, she felt they would be better served as part of a barn-raising-style project that would commemorate COVID-19 in an uplifting way.

The couple sanded all of the window frames by hand and painted them white, with the exception of a few. There was one teal window donated by Buy Nothing Atwater member Tina Van Berckelaer that made Grosso hesitate before painting it over. Unsure what to do, she did what any millennial and social media denizen would do: She asked TikTok.

People have strong opinions about windows, and when Grosso polled her followers, the response was overwhelmingly in favor of preserving the window’s original color.

So in a salute to online crowdsourcing, Grosso decided not to repaint it white.

“The window was a tilt-up model that I think my handyman made for the previous owners,” Van Berckelaer said. “I replaced it with a traditional wooden double-hung window. That window wasn’t bad, but all the other windows had been replaced by jalousie windows, probably in the ‘60s, that really doesn’t go with the style of the house. I hate waste, so I was just thrilled that someone could use something that wouldn’t end up in the landfill.”

The couple’s motivation for creating an outdoor space was utilitarian. The result is that and more.

The greenhouse is a striking addition to the yard: a hodgepodge of doors, windows and scavenged furnishings and accessories from the 99 Cents Only Store in Silver Lake. And while the tilted roof gives the dwelling a Modernist architectural vibe, the interior feels homey and quaint with colorful potted plants, macramé hangers, a decorative rainbow film on two of the windows (another TikTok suggestion) and sparkling disco balls.

Grosso and Morris conceived the idea as a project to do together while they worked from home during the pandemic. (Morris, 34, a production coordinator on the National Geographic documentary series “Trafficked With Mariana van Zeller,” works out of the couple’s one-car garage.)

But once they started collecting scraps from their neighbors and received support on Buy Nothing, TikTok and Nextdoor, the project became more than a long-term DIY project that might sit idle for months or even years. It became a communal neighborhood clubhouse to complete and share.

“So many people were counting on us, we had to finish,” Grosso said. “We had the peer fuel to keep it going.”

While the couple’s rental house is small at 618 square feet, the backyard is an expanse of grass. Over the last two years, Morris added a fire pit and Grosso created an outdoor lounge with used furniture she purchased on Craigslist. Fortunate to have so much empty space, they wanted to take it a step further and create an indoor-outdoor space for entertaining. “Our goal was to make something from repurposed materials,” Grosso said. “We didn’t want to use new stuff. So we went on a journey to find things.”

Many of the windows were already on their second and third lives, and during her collection rounds, Grosso learned that some were more than 100 years old, while others were artifacts from life’s most cherished moments.

“It was wonderful to hear everyone’s stories about why they had these random windows,” she said, adding, “one was from someone’s wedding and they wrote everyone’s name down on the frame.” (The mother of the bride donated it because it was used as a prop for seating cards for the wedding and wasn’t needed after the event.)

Inspired by a photo of a repurposed greenhouse on Pinterest, the couple designed the structure by drawing it on graph paper and then laying it out on the lawn like the pattern pieces of a sewing project.

After a series of contractors refused to build the greenhouse due to the unconventional building materials, Morris, who has a background in construction, hired three friends to build the greenhouse over four days. The couple spent about $1,100 on additional building materials, including lumber, screws, cement for the corner beams, canvas, gently used sliding glass doors from a Habitat for Humanity ReStore, paint and polycarbonate roof panels. Every window and door has a wood frame, which helped in connecting the pieces like a patchwork quilt.

When it came time to furnish the greenhouse, Grosso’s keen trading skills did not fail her: She swapped lemons from her yard for two vintage chairs to go with a hand-painted dining table Grosso purchased for $10 on Facebook Marketplace. The couple recently used the table and chairs for an alfresco dinner inside the greenhouse, where they were illuminated by solar lights. “It was like eating in our own private French restaurant,” Morris said.

“It reminded me of Tavern on the Green,” added Grosso, who grew up in New York.

Now, whenever Grosso looks outside, she sees her efforts in a greenhouse that can double as a photo studio or, when Grosso and Morris want to entertain, a dining room.

Since finishing the project in February, Grosso has been keeping her contributors up to date through TikTok and text, and when it’s safe she hopes to host field trips to their backyard. The leftovers from this project will be gifted to the people who reached out to them with questions on how to make their own greenhouse.

Grosso said she’s grateful for the chance to connect with so many people during a lonely year.

“When I look at our greenhouse, I see the people we met,” she said. “It has been the silver lining to the entire year.”

L.A. Affairs: How my partner gave me the gift of more time — with my father