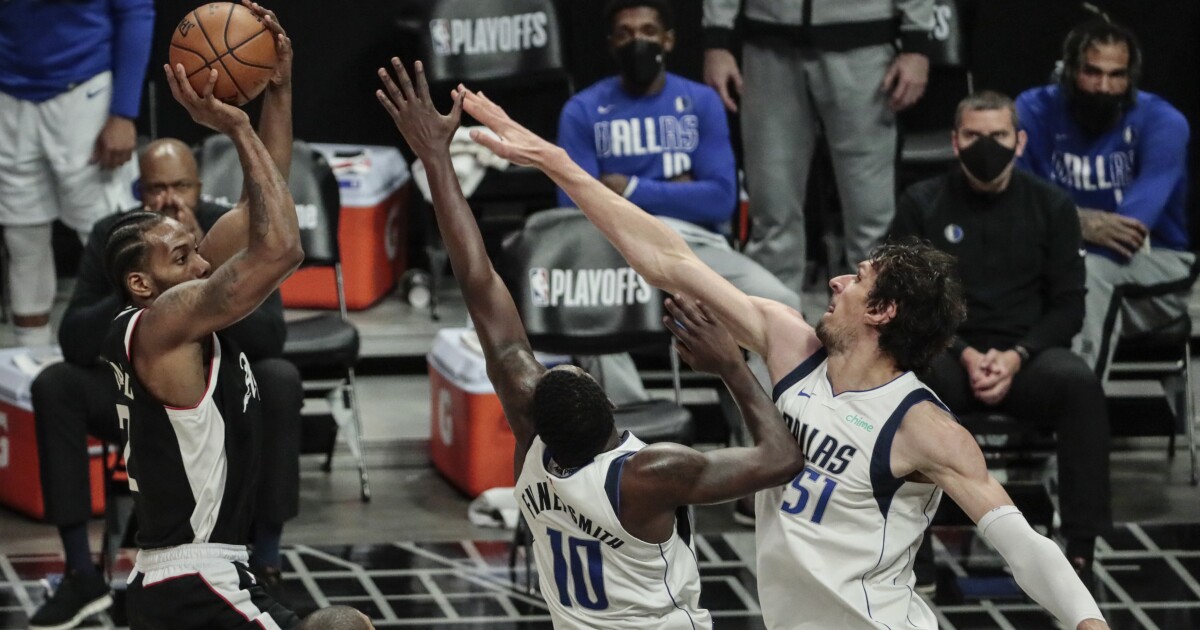 There are new voices.

Yet here they are again, on the precipice of another disaster.

There is renewed determination.

Yet here they are again, on the brink of another humiliating expulsion from the postseason.

Video highlights from the Los Angeles Clippers’ 105-100 loss to the Dallas Mavericks in Game 5 of their first-round playoff series on June 2, 2021, at Staples Center.

The Clippers trail the Dallas Mavericks in their first-round playoff series, three games to two.

A defeat in Game 6 and the most promising season in franchise history will be over. A loss Friday and their track record of failure will be extended by another year.

The Clippers Curse has taken the form of a human being, a 22-year-old from Slovenia named Luka Doncic.

Doncic is healthy again. Or, healthy enough to take down the Clippers.

Of course he is.

What, were you not paying attention for the last 40 years?

Just the Clippers’ luck: An opponent who days earlier looked as if he should be fitted for a neck brace has returned as Superman.

Silly for anyone (read: me) to think the series was over after the Clippers’ win in Game 4 because Doncic looked finished.

These are the Clippers. Nothing ever comes easy for them.

And in Game 5, Doncic unleashed on them one of the greatest one-man performances in the history of the game, finishing with 42 points, 14 assists and eight rebounds in a 105-100 victory for the Mavericks.

Doncic scored or assisted on 31 of the Mavericks’ 37 baskets. He accounted for 83.8% of his team’s field goals, the largest single-game share of any player for any team in postseason history, according to the Mavericks.

Only two other players were ever responsible for more than 80% of their team’s baskets: Allen Iverson and LeBron James.

The Clippers have superstars of their own in Kawhi Leonard and George, but neither performed like one.

The Mavericks countered the Clippers’ small lineup by starting 7-foot-4 center Boban Marjanovic, whose presence dissuaded Leonard from attacking the basket as he had in previous games.

“I thought the early quarters, especially with Boban, they made an emphasis that they were just going to pack the paint and keep us out of getting layups,” Lue said.

Leonard didn’t score his first basket until the final minute of the opening quarter. He attempted only three shots in the fourth quarter.

With the Clippers down, 103-100, he fired a three-pointer with five seconds remaining — an airball.

George was whistled for his fourth foul, with 6:32 remaining in the third quarter, which forced him out of the game.

“When he came out of the game,” Lue said, “we got to ask Kawhi to do a lot. I think Kawhi got a little tired.”

George didn’t take any responsibility for his foul trouble.

“I thought it was tick-tack,” he said. “They called what they called on me, and then those same contact plays down the stretch under three, four minutes weren’t called on the other end. So I don’t know what’s a foul and what’s not a foul.”

Statistically, George had a decent game, finishing with a team-high 23 points while picking up 10 rebounds, six assists and three blocked shots. But with the Clippers closing in on the Mavericks, he made two costly turnovers.

Leonard had 20 points, but on seven-of-19 shooting. He also had five turnovers.

They will have to be better in Game 6, which will be played in Dallas.

“We’re confident we can extend the series and bring this back home,” George said. “We’ve got to go to Dallas. It’s going to be another hard environment for us to go into. It’s what we’ve got to do.”

Home-court advantage has proven to be home-court disadvantage in this series, with the road team winning each of the games so far.

If there is a Game 7, it will be at Staples Center on Sunday.

The Clippers insist the series will return to Los Angeles. They point to how they won two games in Dallas after falling behind two games to none.

The Clippers are certainly capable of reaching the NBA Finals for the first time, but there are forces threatening to send them off into their offseason vacation.

There’s their history, 40 years of it, and there’s Doncic, who is making history.

In order to reshape the identity of their franchise, the Clippers will have to demonstrate they have changed, not just by winning games they should win, but by overcoming the kinds of odds they are facing now.