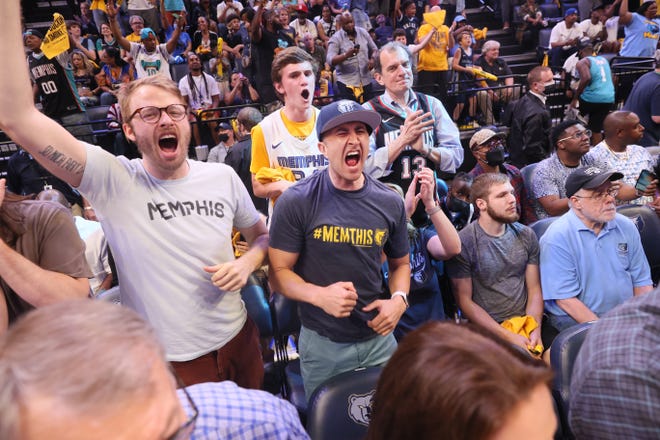 
Stephen Curry warned that the Golden State Warriors’ mission in Game 5 was “Whoop That Trick” to end the Memphis Grizzlies’ season. Well, he was on the wrong end of it Wednesday during the Grizzlies’ 134-95 win.

During a timeout with 8:40 remaining, FedExForum played “Whoop That Trick” and rapper Al Kapone came out to fire up the crowd, with people waving their Growl Towels and chanting in unison. Ja Morant and Jaren Jackson Jr. joined the crowd by dancing on the sidelines.

Curry and Draymond Green watched from the sidelines but Green, ever the troll, waved his towel along with the crowd. Green kept waving even after Al Kapone called out Curry – “Steph Curry, in your face!” – to keep the crowd engaged.

Curry could only laugh with a towel wrapped over his head. It was a rare moment of levity in a series that’s seen volatile behavior on social media and flagrant fouls.

He added: “One thing I don’t respect is people who only bring it when they’re winning. Embrace crowds when you’re winning. We call those front-runners. We’re not front-runners, you know? We got our ass kicked and that’s all right. It happens. But you don’t be a front-runner.

“When you spew it out you got to be willing to take it and not hide from it, not duck from it, not run from it. Embrace it. So, I appreciated the crowd tonight – the energy that they brought to the game. If they want to ‘Whoop That Trick’ we going to whoop them again.”

The Grizzlies, who trailed 3-1 in the series, scored 119 points by the third quarter and led by as many as 55 points. But the most fun “Whoop That Trick” celebration of the season was the cherry on top of avoiding elimination to force a Game 6 in San Francisco on Friday (9 p.m., ESPN).

You can reach Evan Barnes on Twitter (@Evan_B) or by email at evan.barnes@commercialappeal.com