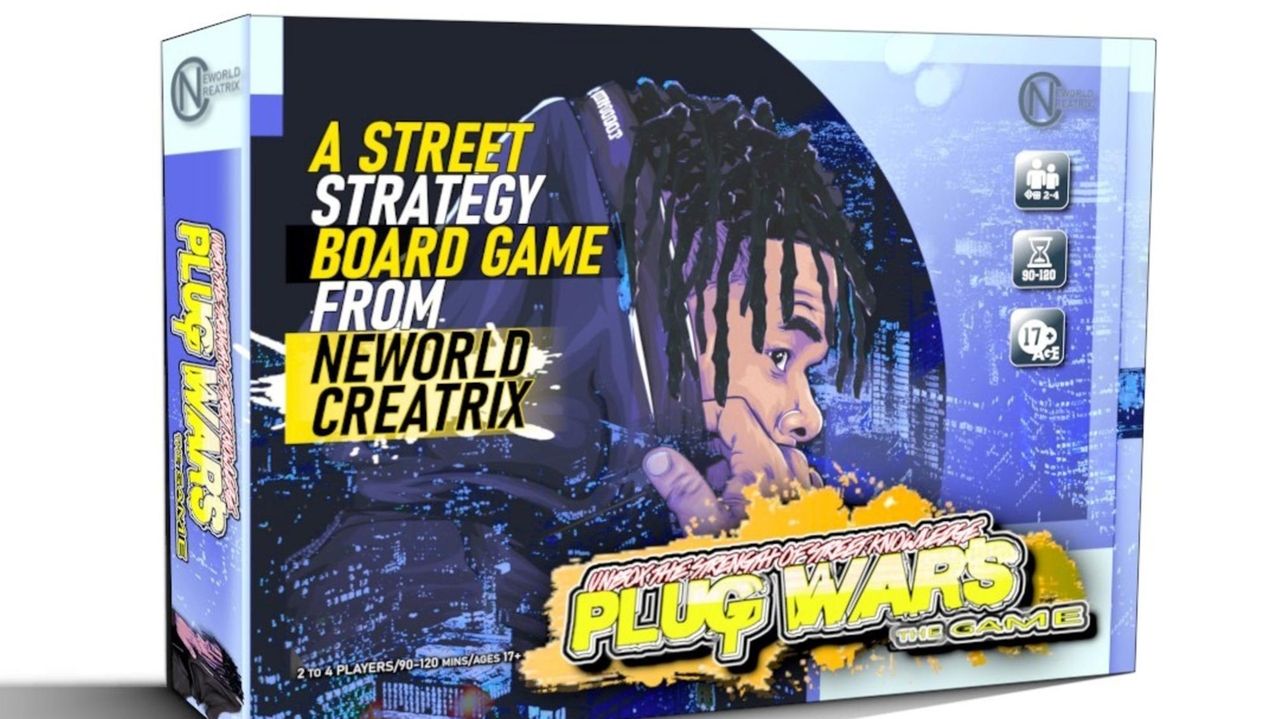 To play the board game Chris Parker designed, a person first needs to know a few terms.

Trap House – an abandoned residence used for the manufacturing and distribution of illegal narcotics.

Major Keyz – jewels or nuggets of knowledge that are vital to achieving success in your daily life; common-sense wisdom that is gained from real, hands-on experiences.

Jump off da Porch – the pivotal moment in a young person’s life when they started hustling in the streets.

Parker, who grew up in the Washington, D.C., region, was 28 and serving a 15-year sentence in a federal penitentiary when he came up with the idea for the board game “Plug Wars” (Plug – a connection for everything you need; the main supplier of a commodity).

At the time, Parker envisioned the games sitting on tables at group homes, juvenile detention centers and prisons.

“I kept thinking of my 14-year-old self and how there were still 14-year-olds and 15-year-olds being incarcerated,” he tells me on a recent evening. “I thought what if they had something they could interact with and get a view of the path that they’re going down? What if they could visually see it while they’re playing?”

Only after he was released two years ago and received advice from individuals within the board game industry – an industry he hadn’t known existed – did Parker start to consider that his audience might go beyond people behind bars.

“I didn’t realize the potential of other people actually wanting to play it, people who don’t come from that lifestyle but who still have questions about it,” he says. “By playing the game, you learn about the ins and outs of the street life and maybe come to an understanding of why people make the decisions they make.”

The game forces players to start as a young hustler with nothing but an objective: Survive and start a legitimate business. “You have to see through his eyes,” Parker says. “He’s growing up in the streets. How does he make it out? How does he go legit?”

How does he make it out? How does he go legit? Parker could be describing questions he has asked himself in the past few years. Even as he tries to market a game that pulls people into the street life, he is trying to escape it.

When Parker and I talk, the 36-year-old father of two is blunt about his mistakes. He admits to selling drugs, carrying guns and “making so many selfish decisions” in his past. He says his daughter was 4 when he was last arrested and 14 when he was released in 2019 after his sentence was reduced by five years as a result of the First Step Act, which shortens mandatory minimum sentences for nonviolent drug offenses. He is now trying to repair that relationship, he says, and remain present for another child who was born a year ago.

And he is trying to do that while living in a high-cost area with a criminal record and limited résumé. In the past two years, since moving in with his brother in Fairfax, Va., Parker has worked at Chipotle, AutoZone and a lawn-spraying service. He now holds a job with UPS, and when he’s not working, he tries to take advantage of online learning opportunities.

One recent opportunity was with the Inmate to Entrepreneurs program. The program, which was started by entrepreneur Brian Hamilton and the Rev. Robert Harris, aims to help former prisoners start their own businesses.

“More than a half million people leave prison every year and rejoin society, and more often than not, they can’t find jobs that allow them to make a decent living,” Hamilton says. “They have to worry about background checks and Google search results. We believe the second chance is an absolutely vital part of the tapestry of the United States. Our goal is to get the free enterprise system to work for people who have been incarcerated.”

The program has existed since 1992 but mostly been limited to people in North Carolina. But in 2020, it started offering free live courses over Zoom nationwide for anyone with a criminal record. Since then, about 120 D.C.-area residents have participated.

Parker is one of the recent graduates – and it just takes looking closely at his board game to see that he’s thought hard about what it takes for someone involved in the criminal life to leave it.

“It took me five years to create the game,” Parker says. “And while creating it, it helped me in my process of changing. Changing my thought pattern. Changing my values. Changing my behavior. It helped me become a better person.”

At 28, he was in solitary confinement when his father died. Parker recalls being taken to the chapel and told, and then being left to think about how he had spent nearly half his life in and out of detention facilities. Not long after that, he says, he started reading self-help books and took the advice of one to carry a notebook around to jot down ideas.

“I consider myself a recovering chess addict,” he says. He loved playing as a child and in prison, and he started wondering, “What if there was a game where four people could play chess?”

From there, he started thinking about creating a strategy-based game and realized that he and others around him were already living in one: “You start by being involved in the street, but what’s the ultimate objective? Your ultimate objective is to live and make it out.”

He used typing paper to create a prototype of the board, complete with pictures he cut from a magazine. He then made a deck of cards and a set of dice.

To make dice in prison, he says, requires toilet paper and ibuprofen. First, wet the paper, shape it into a cube and coat it with the pill to create a sort of varnish. Then, leave it to dry for 24 hours. Finally, draw the dots on it.

I have not played “Plug Wars,” so I can’t attest to the experience of it. But Parker warns that it is gritty, and the website he created for it lists the recommended age of players as 17.

“It’s kind of in your face,” he says. “I didn’t sugarcoat anything because I think if I didn’t tell the full story, people wouldn’t get the real message. I had to base it in reality.”

Pit bulls are used in the game to protect property from enemies, and some of the cards in the deck that players pick from call for characters to be shot or sent to jail.

Parker plans to launch the game on a worldwide digital platform in the coming months, and he hopes to soon start raising funds to produce the tabletop version. He says he didn’t want to ask people for money without giving them something in return, so he has placed a special order of dice that he will offer for sale.

These ones, though, won’t be made of toilet paper.