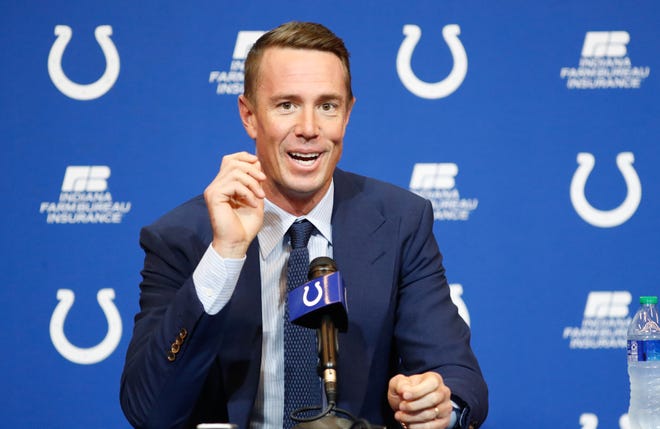 
INDIANAPOLIS — The relationship Matt Ryan has built with Peyton Manning over the years is strong, and for those who have been around the Colts long enough to see both men in action, the parallels have been impossible to ignore.

The way Ryan carries himself on the field and the way he prepares in the meeting room feel awfully familiar.

Especially for the man in the building who spent most of his career on the receiving end of Manning’s pinpoint throws. Ryan has been in the building for only a couple of weeks now, but when the Colts new quarterback talks, the team’s new wide receivers coach hears echoes of Manning’s famous drawl.

“Man, it makes me almost want to throw up, because he reminds me of Peyton so much,” legendary Colts receiver Reggie Wayne said. “He’s the epitome of a leader. In the meetings, he’s vocal, he’s trying to get that connection with the receivers, trying to get extra (work) as much as possible.”

NFL NEWSLETTER:Sign up now to get football news delivered to your inbox

Wayne is not the only Colt who feels an echo of Manning in Ryan’s presence.

Reich has felt it in the film room, where he’s been hard at work with Ryan and the rest of the coaching staff, tailoring the Indianapolis offense to fit its new starting quarterback. The Colts head coach began his coaching career in the film room with Manning, and Ryan’s approach to offensive football mirrors his mentor’s.

When the offseason began, Indianapolis owner Jim Irsay made the decision to make a change at quarterback, in large part, because he believed the Colts needed more leadership and more accountability out of the game’s most important position.

Irsay believes the Colts found the perfect fit with Ryan at the helm.

“That type of guy, that type of Navy Seal, astronaut, fighter pilot. … I mean, these guys are special,” Irsay said. “Matt is really special in that way, with rare leadership skills.”

Famous for holding everyone in the building to his lofty standards of work ethic and preparation, Manning was never shy about coaching the rest of the players on the roster.

Ryan has been the same way in his first three weeks in Indianapolis.

“He’s vocal, he demands excellence,” Wayne said. “He admits his mistakes. As a receiver, that’s what you love, when you know you’re not perfect as a quarterback.”

Wayne believes Ryan’s approach will pay dividends for one of the youngest wide receiver groups in the NFL, the way Manning’s approach meant so much to his own development two decades ago.

“He’s out there, he’s grinding with them,” Wayne said. “I really feel like with his years and experience in this league, it will help these young guys. I remember having a quarterback with some experience, that was everything for me.”

To younger Colts, Ryan’s approach brings up echoes of another legendary mind, the one who led the offense two years ago.

Brought in from the Chargers to stabilize the Indianapolis starting quarterback position, Philip Rivers approached the practice field the same way Ryan does.

Almost as much a coach as a quarterback.

“Kind of reminiscent of Philip with his command,” Colts running back Nyheim Hines said. “He doesn’t know the playbook as well as Philip yet, but just his detail, his leadership, talking to us after every route, coming and talking to every guy, it’s great. I think the sky’s the limit with Matt Ryan.”

Indianapolis made a flurry of moves in an aggressive offseason, bringing in big names like defensive end Yannick Ngakoue and cornerback Stephon Gilmore, along with big-time leaders like safety Rodney McLeod.

But a change at quarterback is always going to set the tone.

The trade that landed Ryan has clearly made an impression right away.

“I can’t say enough about Matt Ryan,” Irsay said. “There’s no way I can sit here and explain to you, unless you looked in Frank (Reich) and Chris Ballard and different people in the organization’s eyes, and see the difference that goes on right because of Matt Ryan being in this building — his professionalism, his stature.”

And to the Colts who were here when Manning directed the ship, that professionalism feels awfully familiar.