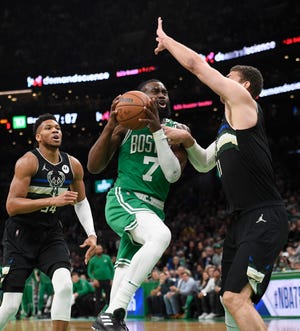 
The Boston Celtics have an All-NBA player in Jayson Tatum, and the 2021-22 Defensive Player of the Year in Marcus Smart.

Jaylen Brown doesn’t exactly get lost in the shuffle on a 51-win team, but he may be one of the more underappreciated and unheralded players in the league, at least outside of Boston.

Brown scored 25 of his game-high 30 points in the first half, establishing a presence offensively in the Celtics’ 109-86 victory against Milwaukee in Game 2 of their Eastern Conference semifinals series. A lot of talk on Game 2 will center on Boston’s defense and what it did to the Bucks and Giannis Antetokounmpo in particular. Rightfully so, too. The Bucks star finished with 28 points but had just five in the first half as the Celtics built a 65-40 lead.

SPORTS NEWSLETTER:Sign up now for daily updates sent to your inbox

But coming out of Milwaukee’s Game 1, Celtics coach Ime Udoka wasn’t as concerned about the defense as he was the offense. Boston held Milwaukee to 101 points. Scoring just 89 was the problem.

How did the Celtics rectify that? They were just a more efficient team in the paint, mid-range and from 3-point range.

Brown arrived at the arena early.

“Just mental and physical preparation,” Brown said. “Get my body going physically, get my mind focused, visualizing the game, seeing what’s coming and coming out and performing. That’s it.”

He wasn’t the only Celtic with a big game. Jayson Tatum scored 29 points and Grant Williams had 21, and Brown, Tatum and Williams were a combined 17-for-29 on 3s. Boston outscored Milwaukee 60-9 on 3-pointers. It’s a wonder that Milwaukee didn’t lose by more.

Brown was at the forefront of that offensive movement. In the first half, he made 9-for-10 shots from the field, including all five of his 3-point attempts, and had 17 points in the first quarter, all from deep or mid-range.

“JB was locked in,” Tatum said. “If I was a bettin’ man, I would’ve bet JB was going to have a great game. He set the tone. That was big for us, just how aggressive he was coming out of the gate.”

Those are All-Star numbers, and they are hidden behind Tatum’s stats. For context, Brown was one of 11 players to average at least 23-6-3 this season alongside other perimeter players like Tatum, Kevin Durant, Luka Doncic, LeBron James and Paul George.

He is capable of delivering like that all series. He might not get 30 every game, but Brown (and Tatum) needed to play better offensively than they did in Game 1. They were a combined 10-for-31 shooting for 33 points. Two days later, after watching video, practicing and stewing over a loss, they were 21-for-38 for 59 points, and it was necessary with Smart (bruised right thigh) sidelined.

“Survival of the fittest,” Brown said. “Every game counts. … We can’t let one game dictate how this series is going to go.”