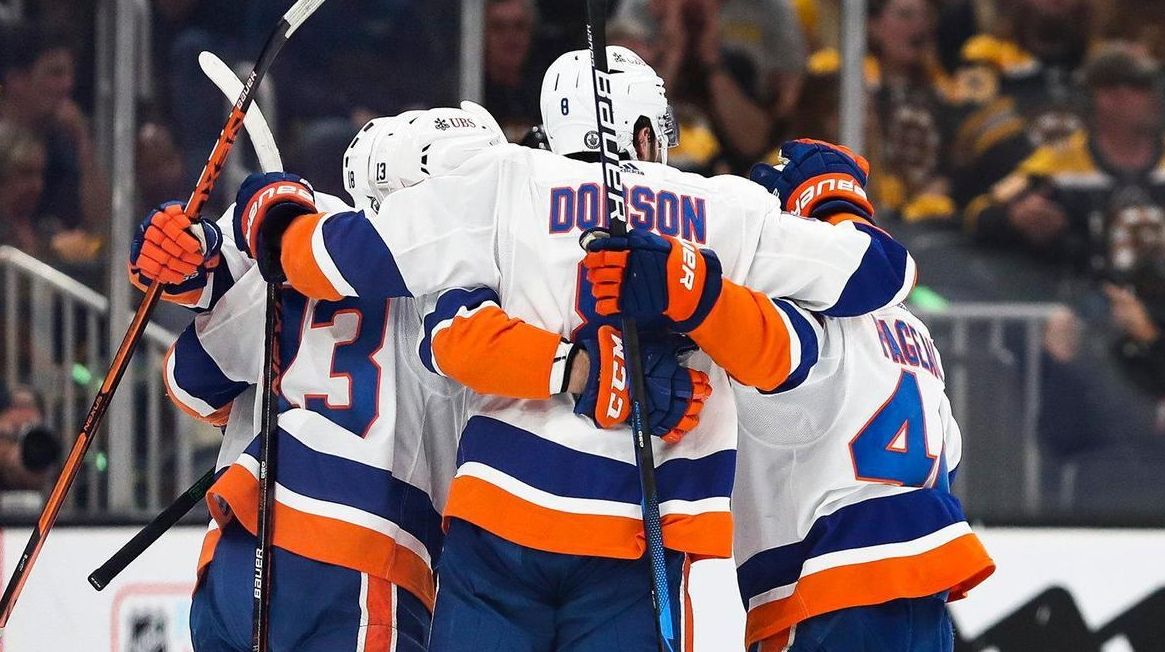 The Islanders still need nine more victories to get to the finish line, but sometimes it is impossible to ignore the hockey gods when they are trying to tell us all something.

Maybe it’s your year when you get dominated by the Bruins early in a playoff road game, yet somehow find a way to win, 5-4, and get within one victory of a return to the NHL’s final four.

Maybe it’s your year when you achieve said victory behind a 3-for-4 night on the power play when in the regular season you ranked 20th in that category (18.8%) and were facing a Boston team that ranked second in killing penalties (86.%).

Maybe it’s your year when a couple of those power play goals followed questionable officiating calls and another was helped by a defenseman breaking his stick.

Or when the best hockey line in the world – David Pastrnak, Bergeron and Brad Marchand – was at the top of its game.

Or when your goaltender, Semyon Varlamov, outperformed his more decorated counterpart, Tuukka Rask, who was pulled after two periods in favor of a rookie named Jeremy Swayman.

Speaking of Swayman, it was 4-2 when he entered the game, at which point Brock Nelson scored 1:59 into the third to make it 5-2.

But the Bruins were not done. With Adam Pelech off for hooking Pastrnak, Pastrnak scored at 3:48 of the third to get the Bruins back within two.

The Bruins kept coming at Varlamov in waves, and finally made it 5-4 with 5:17 left when David Krejci’s shot squirted under the goalie and over the goal line. In one stretch the Bruins had 13 shots to none for the Islanders.

Led by their elite first line, the Bruins dominated the first period, but somehow it ended with the score tied at 1.

It started with Pastrnak scoring 1:25 into the game, marking the fifth time in six playoff outings this season that Varlamov has given up a goal on one of the first three shots against him.

Pastrnak shocked the hockey world – and mostly himself – by hitting the post when presented with an unguarded net in Game 4 at Nassau Coliseum.

But he looked unperturbed when he arrived at the rink on Monday, smiling and wearing a skin-tight suit the color of mint chocolate chip ice cream.

The Pastrnak tally began with Marchand taking the puck away from Anthony Beauvillier, then Long Beach’s own Charlie McAvoy feeding Pastrnak at the top of the left circle.

The Islanders would have been happy to get out of the first period with a one-goal deficit, but at 18:17 Sean Kuraly was called for a slash on Noah Dobson, a decision that infuriated the Bruins.

Then Mathew Barzal skated in on Rask and ripped a shot from the right faceoff dot to the goalie’s short side for a power play goal at 18:49.

The Bruins had the better of the play for much of the second period, too, but it ended even worse for Boston, with the Islanders leading, 4-2, after adding two more power play goals.

On the first, Matt Grzelcyk was off for cross-checking Leo Komarov when Josh Bailey’s shot went off the skate of the Bruins’ Connor Clifton and went directly to Kyle Palmieri, who buried it for his sixth goal of the playoffs.

The Bruins’ top line struck again to tie it when Marchand made a fantastic move around Ryan Pulock and slid the puck around Varlamov at 7:27.

Curtis Wagner was called for a high stick on Barzal far from the play late in the first period and, sure enough, the Islanders made it 3-for-3 on the power play.

The Bruins were down a stick in addition to being down a man after Jarred Tinordi snapped his, and was given a new one by Coyle.

Then Barzal found Jordan Eberle near the left faceoff dot and he beat Rask at 16:38 to make it 4-2.

Neil Best first worked at Newsday in 1982, returned in 1985 after a detour to Alaska and has been here since, specializing in high schools, college basketball, the NFL and most recently sports media and business.