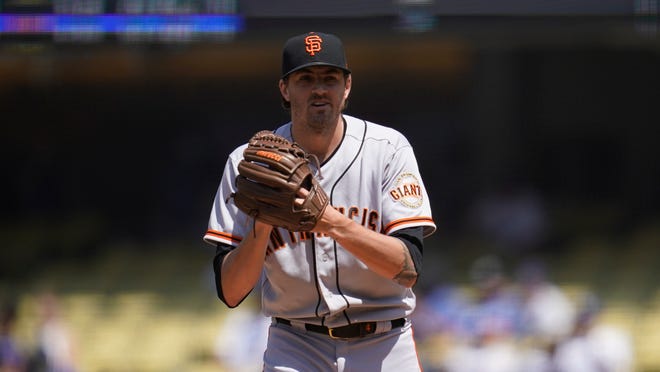 The delicate balance between pitchers and hitters has been tilting in one direction for a good while now. The surge in home runs over the past two seasons only served to mask how pitchers are controlling the game like never before.

Major League Baseball hitters have a collective .237 batting average, down 15 points from just two years ago. Yet this offseason, MLB made the decision to alter the baseball slightly to keep it from flying so far.

The home run rate is down, along with just about every other measure of offense. What MLB may not have expected is the less-dense and ever-so-slightly lighter baseball has become yet another weapon in a pitcher’s arsenal.

Pitch velocities, spin rates and movement have all increased. And then there’s something else St. Louis Cardinals manager Mike Shildt recently called “baseball’s dirty little secret.” Pitchers are using a variety of sticky substances to put even more spin on their offerings, creating more movement, and making them even harder to hit.

MLB has told owners the next step in its enforcement plan — which would include 10-day suspensions — will soon be implemented. As a result, pitchers will be under more scrutiny with TV cameras and zoom lenses looking for any hint of cheating.

But from a fantasy perspective, is there a connection between pitchers’ spin rates and their success?

Here are the pitchers through June 6 with the highest fantasy values according to BaseballHQ.com. Spin rates (in rpm) and pitch mix data are from BaseballSavant.com.

With a 7-0 record and 1.27 ERA, Gausman leads the way among pitchers without doing a whole lot different than he did last season. The average spin rates on all four of his pitches — four-seam, splitter, slider, change-up — are down from last season, though he’s throwing split more and change-up less than he did last year.

DeGrom’s spin rates have hardly changed over the past four seasons. The key for him is the velocity on his fastball, which he’s throwing a career-high 63.4% of the time, and averaging a career-high 99.2 mph.

He’s having a historic season, leading the majors with a minuscule 0.62 ERA. In addition, his control has been impeccable with 93 strikeouts and eight walks in 58 innings.

Woodruff’s fastball is spinning less this season, while his curveball is spinning just a bit more. Otherwise, his strikeout and walk rates are almost identical to what they were a year ago. The biggest difference between last year’s 3.05 ERA and this year’s 1.42? A 59-point drop in opponents’ batting average on balls in play.

Consistency is Scherzer’s middle name. His spin rates are perfectly in line. And his fastball velocity has held steady at about 94.5 mph for the past six seasons.

Bauer has been one of the most outspoken pitchers on the benefits of a high spin rate. Not coincidentally, he’s also one of the best at executing it — gaining 500 rpm on his fastball since 2018.

However, in Bauer’s last start, June 6 in Atlanta, his four-seamer averaged just 2613 rpm, more than 200 below his season average. It was also the lowest it’s been in a game in almost two years.

MLB collected a few baseballs from one of his previous starts earlier in the season. So did Bauer do something different due to the increased attention?

Cole’s spin rate took a major jump in 2018, when he was traded to the Houston Astros and gained more than 200 rpm on his four-seamer.

He began this season with an incredible display of command, with 78 strikeouts and three walks in his first eight starts (52 2/3 innings). Then on June 3 against the Rays, Cole yielded five runs in five innings and his spin rates on both his four-seamer (2436) and his curve (2763) were noticeably below his season averages.

Lynn is using his cut fastball (31%) more this season than he has since he started throwing it in 2017. But like his four-seamer, the spin rate on his cutter is also down slightly from last season.

Peralta has also changed his pitch mix more than his spin rate. He is throwing fewer fastballs and curves and relying more on his slider (31%). He also added a change-up this season that he throws to left-handed batters. The new mix has made his entire repertoire much more effective.

Darvish throws six different pitches, with a cut fastball (38%) and slider (23%) as his primary offerings. He has elite spin rates on everything, even though his four-seam fastball velocity (94.6 mph) is only in the 10th percentile.

Burnes ditched his four-seamer last season after opponents hit .425 against it in 2019. In its place, he’s leaning heavily on a cut fastball he now throws more than half the time. His high-spin curve has become a major weapon, with opponents hitting just .043 (1-for-23) against it this season.