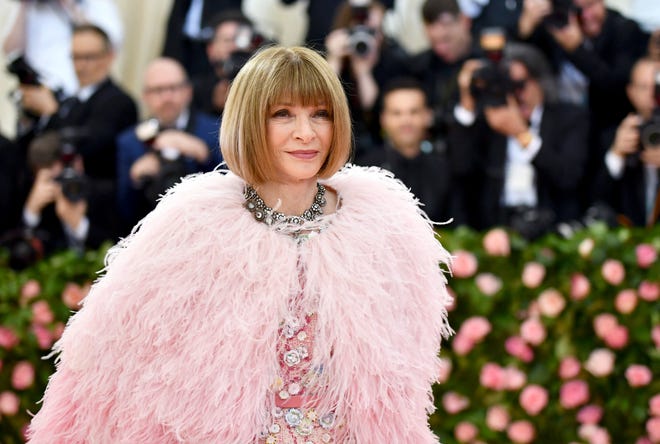 
Anna Wintour, the iconic yet elusive fashion leader, is made more tangible in the latest biography cataloging her life, “Anna: The Biography” (Gallery Books, 464 pp., out now).

Wintour, 72, has expanded her career as editor in chief of Vogue magazine over several decades to become a gatekeeper and curator of the fashion industry. The British-born editor and Condé Nast global chief content officer carries a reputation of prestige and authority through her high-profile relationships and ability to make or break fashion careers with a simple nod of approval.

Fashion journalist and author Amy Odell reveals the person behind the iconic bob and black Chanel sunglasses with research that began in 2018 and a collection of more than 250 interviews with Wintour’s closest friends and colleagues. Odell includes Wintour’s childhood moments, watching her father rule London’s Evening Standard newspaper, her intricate planning of the Met Gala and her personal, yet compartmentalized, relationships.

“The fashion industry is predicated on understanding that there is an ‘in’ and an ‘out.’ In Anna’s world, people occupy those distinct buckets,” Odell writes.

Here’s what we learned about Wintour from the people who best know the hard-to-know fashion doyenne.

Wintour showed an interest in fashion at an early age, but it was her father, newspaper editor Charles Wintour, who crafted her career aspirations.

Wintour was encouraged to be wrapped up in her father’s world of publishing. Close childhood friend Vivienne Lasky recalled that Charles Wintour would sometimes task his daughter to read articles and ask her opinion of them, “as if training her for future responsibilities.”

Wintour once sought advice from her dad while filling out a form that asked what her “career objectives” were. Wintour’s father replied: “You write you want to be the editor of Vogue, of course.”

Years later while working at New York Magazine, she was invited to Vogue’s offices for a meeting with then-editor in chief Grace Mirabella, who died in December, and verbally confirmed her future career.

Experiencing job burnout?:Self-care can help, but it isn’t just your problem to solve

“Mirabella asked Anna what job she would like at Vogue and Anna replied in what she later described as ‘a sudden fit of candor’ that was unlike her, ‘Yours,’ ”  Odell writes.

The meeting took place in the early 80s, less than a decade before Wintour’s declaration became reality in 1988.

The 1995 Met Gala was Wintour’s first time at the event’s helm, but it didn’t become her permanent “Party of the Year” until 1999.

“It was the flashiest and most shocking party the Met had ever thrown,” Odell writes. “Anna had cracked off the shellac and unleashed the future’s much more hip possibilities.”

It’s no secret that Wintour has a heavy hand in curating the Met Gala’s details, as previously cataloged in 2016’s “The First Monday in May” documentary. Wintour, along with museum curators and close friend Tom Ford, orchestrates every detail including the dress code, food and seating arrangements.

During one Met Gala, the seating chart was arranged so that Jennifer Lopez and her eventual husband Marc Anthony were seated back-to-back because their relationship wasn’t public yet.

“They could be together, but not appear like an item,” Odell writes.

West Coast Vogue contributor Lisa Love details to Odell some of the intricacies Anna would “fuss about” during the event.

“When Kim Kardashian wore a custom latex Thierry Mugler dress that redefined tight to the camp themed party in 2019, Anna kept saying to Lisa Love, ‘Can you please tell her to sit down?’” Odell writes. “Love had to explain that, actually Kardashian physically couldn’t sit.”

Anna was also serious about the gala’s menu.

“She banned chives, garlic, onions and parsley, which get stuck in your teeth and make your breath smell. Also for odor-related reasons, fish was never served,” Odell writes.

Before André Leon Talley’s death in January, Odell interviewed him about his once-close relationship with Wintour.

Wintour spoke Talley’s name at Vogue for a job while she was still the magazine’s creative director. Talley wasn’t aware of Wintour’s endorsement until he returned to his apartment after being hired and saw a handwritten note under his door from her that read “Welcome to Vogue.”

Talley’s time at Vogue as creative director was integral for Black visibility in fashion, as he brought star models like Naomi Campbell and Veronica Webb into the publication’s focus. He advocated for diversity and encouraged top designers to include more Black models in their shows as he helped shape Vogue at large. He considered his job at the magazine which evolved to editor-at-large as being “the highest-ranking Black man in the history of fashion journalism.”

Talley and Wintour’s relationship was often fair-weather, but he was present for some of Wintour’s most personal moments, including her wedding (Talley was one of two co-workers Wintour invited), her mother’s funeral in London and by her side at the 1999 Met Gala when after then-boyfriend Shelby Bryan made her cry after he left the party early.

“Talley saw her leaning against the wall, in her John Galliano gown with a thick caterpillar of red fox fur around her shoulders, mascara-laced tears running down her face,” Odell writes of his account.

The late fashion journalist said it was the second time he’d seen Wintour burst into tears, the first time being at her mother’s funeral.

Talley’s first falling out with Wintour was in 1995 over work differences. They made up and fell out again in 2018 when Wintour took away his Met Gala red carpet spot.

In Talley’s memoir “The Chiffon Trenches,” he wrote about their relationship’s demise. Talley told Odell he was no longer invited to dinner parties and the relationship became “reduced to perfunctory happy birthday exchanges,” Odell writes.

Talley said: “I think she thought I was too fat and too old. … She just became bigger than life. She has no time for me.”

Wintour made time for Talley and spoke at his memorial service in Harlem on April 29, just days before this year’s Met Gala. In her eulogy, she spoke of his “appreciation and distaste,” according to The New York Times.

“Anna never wanted to cross André,” former Vogue managing director Laurie Jones told Odell. “He was this guy who had been mistreated and he was Black and he was gay and all these awful things happened to him his whole life. And she was so sensitive to that.”

At Talley’s memorial Wintour added that he taught her, an international fashion leader who climbed several mastheads with powerful connections, to speak fearlessly.

Chris Wallace will resume CNN+ series on CNN, HBO Max in the fall

Tears for Fears ready tour behind first album in 17 years