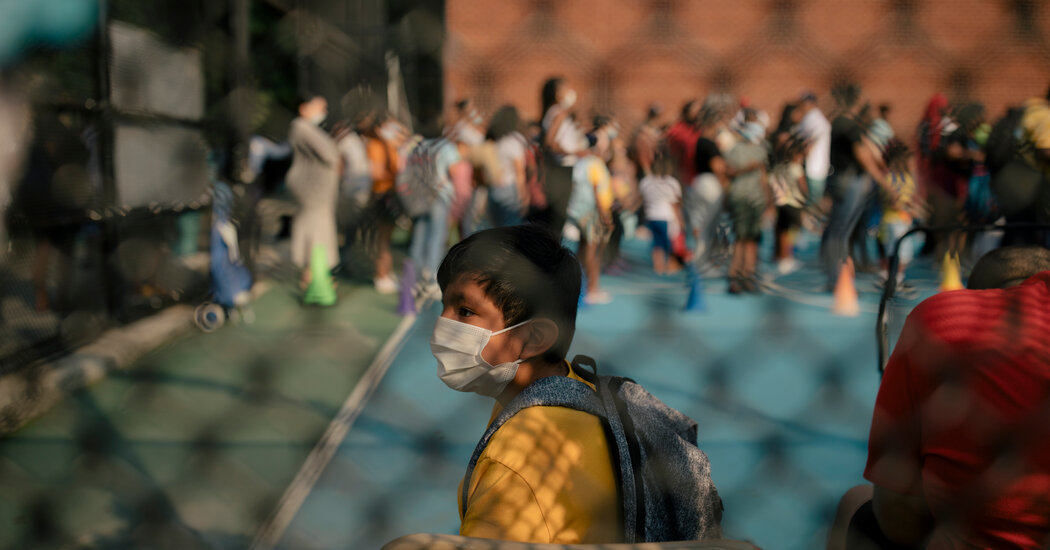 
Good morning. It’s Tuesday. We’ll look at why most public school students in New York City probably won’t be required to have Covid-19 vaccines when school opens next fall. We’ll also find out why one of the city’s cultural institutions is adding “New York” to its name.

Mayor Eric Adams and Gov. Kathy Hochul have both said they favor making Covid-19 vaccinations mandatory for all public schoolchildren. But my colleague Sharon Otterman says it’s not likely to happen in time for the next school year.

For the Covid-19 vaccine to join 12 other vaccinations required by state law for school attendance, the New York State Legislature would have to amend the public health law. Democratic lawmakers have introduced bills in Albany to do that.

But Senator Brad Hoylman, who introduced the childhood Covid vaccine bill in the State Senate last October, said it was such a hot potato that it had not even been assigned a formal bill number. “That is clearly an indication that it is not ready to be considered,” he said.

The mayor could order a vaccine mandate on his own. But Adams, who took office in January, has pushed the city in the opposite direction. He suspended a citywide program that effectively encouraged families to vaccinate their children by requiring vaccination to enter restaurants or indoor entertainment venues.

Adams has said repeatedly that he would back a mandate for schoolchildren once the vaccine is fully F.D.A.-approved for them. A decision about Pfizer’s vaccine for 12-to-15-year-olds could come in the next few months. The company has yet to apply for full approval for 5-to-11-year-olds. But the efficacy of the Pfizer vaccine in children under 12 has been disappointing.

The vaccination rate among the city’s children of elementary school age is higher than the national average but remains quite low. Citywide, 46 percent of children ages 5 to 12 are fully vaccinated, compared with 80 percent of those ages 13 to 17.

These rates vary widely by both community and race, hinting at the deep challenge of enforcing a mandate. For example, 99 percent of Asian children ages 5 to 12 in New York City are fully vaccinated, according to city statistics. But only 37 percent of the city’s white children ages 5 to 12 are. The vaccination rate for white children that age is strikingly different by borough, from 21 percent in Staten Island to 84 percent in Manhattan.

Brad Lander, the New York City comptroller, and Jumaane Williams, the city’s public advocate who is also running for governor, are among several public officials who have recently called for a mandate. But Lander acknowledged that there seemed little political support for it.

“Some of it depends on what happens in the next couple of months,” he said last month. “If there are no more spikes and variants — as I devoutly wish — then I doubt there will be much push for it.”

The American Academy of Pediatrics continues to recommend vaccination for all children and adolescents ages 5 and older, including for those who were previously infected. But jumping from that to a mandate is a big step. Several experts said it would be better to keep focusing on voluntary vaccination programs before next fall.

Pediatricians are also divided on whether there should be a mandate for schoolchildren, said Dr. Toni Eyssallenne, an internist and pediatrician for Strong Children Wellness, a Queens-based medical group.

A mandate would boost the vaccination rate, she said. But, she added, “since this is a relatively new vaccine, some parents might pull their children out of school or other activities that can positively influence development, socially and emotionally.”

Enjoy a sunny day near the 70s, New York, with wind gusts persisting through the night. The evening is mostly clear with temps dropping to the high 40s.

In effect until May 26 (Solemnity of the Ascension).

A fund for abortion rights

New York State is preparing for an influx of women seeking abortions if the Supreme Court reshapes reproductive rights in America, as suggested by the draft opinion leaked last week.

Lawmakers in Albany and Letitia James, the state attorney general, are pushing a bill that would set up a state fund to pay abortion providers. The measure would also offset costs for low-income and uninsured or underinsured abortion patients.

New York codified Roe v. Wade — the 1973 decision that established a constitutional right to abortion — as state law in 2019 with the Reproductive Health Act, which removed restrictions on abortions, including a ban on the procedure after 24 weeks. The proposals under consideration aim to expand and strengthen safeguards.

One would protect New York-based providers by forbidding law enforcement from cooperating with investigations in states where abortion is criminalized, mirroring legislation that was recently passed in Connecticut. Another would prohibit New York courts from issuing subpoenas in conjunction with out-of-state abortion proceedings.

And an amendment that would enshrine the right to an abortion in the state’s Constitution is gaining momentum. The sponsor of that bill, State Senator Liz Krueger of Manhattan, said that such a move was critically important for safeguarding the right to reproductive care.

“We can no longer afford to play a risk game,” she said, adding that the expected Supreme Court ruling “opens the door for more cases to go after other things, including same-sex marriage, fundamental rights to privacy, all these things that aren’t necessarily correctly in our Constitution.”

The name change is merely a modification, said Seth Pinsky, the chief executive officer. “What we’re changing is our logo and in so doing, the nickname people use,” he said. “People in recent years have tended to use the nickname 9-2-Y, and we’re modifying that with the new logo to be 9-2-NY.”

Adding the reference to New York grew out of the 92nd Street Y’s experience during the pandemic, when it moved its programming online and its audience exploded, with viewers in 200 countries as well as all 50 states. “We went from being a New York institution to being an international institution,” he said, and “found that there are people who know who we are and know our reputation. But there are a lot of people who don’t. We think that making clear that we are a prototypical New York institution is something that will help define us,” he said.

The new logo, the work of a team at the design firm Pentagram, is being introduced as the 92nd Street Y, New York, reorganizes its programs under five “pillars” and promotes an online learning platform called Roundtable that is aimed at “a very particular niche,” he said — “higher-level, very rigorous courses” in the liberal arts. “These aren’t 101 classes,” he said. “They’re 201, 301 and 401 classes.”

And then there is the physical home of 92nd Street Y, New York, at 92nd Street and Lexington Avenue. The first phase of a $200 million master plan is beginning with the renovation of its second-largest performance space, the construction of a new dance center and the upgrading of its gym.

I walked into a drugstore on Amsterdam Avenue to buy a seltzer. Somehow, I ended up at the register with a pint of Ben & Jerry’s Phish Food that was frozen rock solid.

I planned to eat my impulse purchase while sitting on a stoop around the corner, so I asked the cashier for a plastic spoon.

Glad we could get together here. See you tomorrow. — J.B.

P.S. Here’s today’s Mini Crossword and Spelling Bee. You can find all our puzzles here.

Melissa Guerrero, Olivia Parker and Ed Shanahan contributed to New York Today. You can reach the team at nytoday@nytimes.com.

Sign up here to get this newsletter in your inbox.

70 N.Y. Judges Went on a Montauk Retreat. 20 Came Down With the Virus.