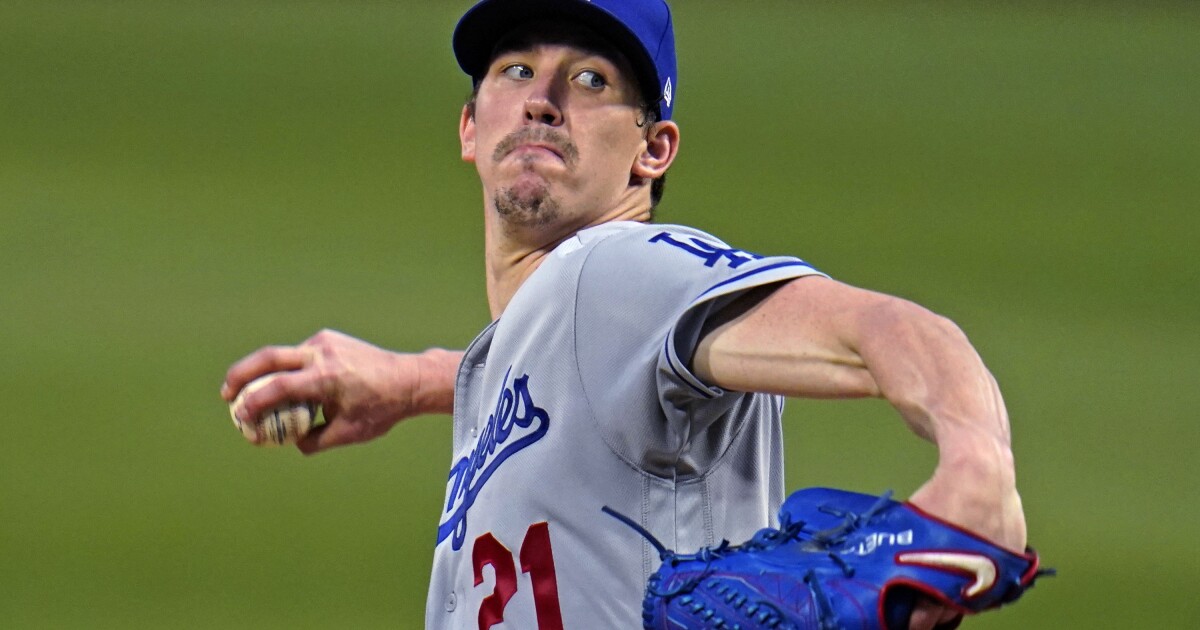 The Dodgers reached the 60-game mark, an irrelevant checkpoint made noteworthy after Major League Baseball’s shortened 2020 season, in Tuesday’s 5-3 win over the Pittsburgh Pirates.

Last year, the Dodgers finished their 60-game regular-season schedule 43-17. It was the best winning percentage by a National League club since the 1909 Pirates. Both teams went on to win the World Series. This year, the Dodgers are in third place and eight games worse, sitting at 35-25 after handling a tanking Pirates club light-years from that championship team from more than a century ago.

The Dodgers are looking to capitalize on a weak part of their 162-game schedule to string together victories at a clip similar to last year’s run. Tuesday was their fourth of 15 straight games against teams with losing records. They’ve won 11 straight games against the Pirates and 18 of 20. They’ll have two more chances to pound the last-place Pirates (23-36) at PNC Park before returning to Los Angeles.

“Obviously, we’d like to be leading the standings; we’re not,” Dodgers manager Dave Roberts said. “Our best baseball, in my opinion, is yet to come. We’re fortunate that it’s 162, but we knew that going into the season.”

Walker Buehler, after rain delayed the start of the game by 30 minutes, tossed seven scoreless innings despite not recording his only two strikeouts until the sixth inning.

The Pirates seemingly took a 1-0 lead in the first inning when Ke’Bryan Hayes, the organization’s top prospect, lined a home run down the right-field line. The ball banged off the foul pole, just over the wall. Hayes initially didn’t think it was a home run so he sprinted to second base before trotting the rest of the way home for his third homer.

But Dodgers catcher Austin Barnes noticed that Hayes didn’t touch first base from the dugout. The team challenged. The replay confirmed his suspicions and Hayes was ruled out.

“I had no clue,” Dodgers second baseman Chris Taylor said. “I was wondering why we were challenging.”

In the end, the Pirates officially tallied just two hits, both singles, off Buehler, who has logged at least six innings in each of his 12 starts. He walked one and tossed 93 pitches. At the plate, he went two for three, including a single to complete a nine-pitch at-bat in the third inning. His two strikeouts were a season low.

“Kind of an interesting one,” Buehler said. “A little different than usual for me, but happy to win.”

Pirates right-hander JT Brubaker equaled Buehler for four scoreless innings in his first start since May 29, holding the Dodgers to two hits. But he didn’t survive the fifth. Brubaker tired and L.A. scored three runs on four hits to chase the starter.

Gavin Lux singled and advanced to third base on right fielder Gregory Polanco’s two-base error to ignite the surge. AJ Pollock then swatted an RBI double. Two batters later, Mookie Betts lined a two-out RBI triple and Brubaker’s night was over. Taylor smashed a two-run home run in the sixth inning to extend the Dodgers’ lead to five. The homer proved crucial.

The Pirates pushed across their first run in the eighth off Joe Kelly on Adam Frazier’s two-out double. They added two runs against Nate Jones on solo home runs by Bryan Reynolds and Michael Pérez to trim the margin back to two.

That prompted Roberts to summon Kenley Jansen with two outs, a disappointing turn of events when trying to avoid overworking the high-leverage options in the midst of 32 games in 34 days. But Jansen didn’t need to exert much effort for his 13th save. He struck out Phillip Evans on three cutters to end game No. 60 on a high note with 102 more to go.

Roberts said Corey Seager is expected to take two-handed swings off a tee in the next couple of days, the next step in his recovery from a fractured right hand.

From there, Roberts said, Seager’s ramp-up should be “pretty quick” before coming off the injured list. Roberts said expecting the 27-year-old shortstop to return in early July “is totally fair.”

“The way I see him right now,” Roberts said, “it’s just kind of contingent on how he responds to swinging a bat with two hands.”

Seager broke the fifth metacarpal when he was hit by a pitch May 15. He underwent a weekly scan of the hand Saturday. Roberts said it showed more healing in the bone.

“It is quicker than what I would’ve expected,” Roberts said of Seager’s recovery. “You have a young body that certainly heals pretty quickly and you have an eager player and that kind of lends itself to that.”

Roberts said Barnes, who sprained his ankle Sunday in Atlanta, is scheduled to start Thursday’s series finale against the Pirates. … Roberts said he expects reliever Scott Alexander (shoulder) to be activated in late June or early July. The left-hander was placed on the injured list May 6.