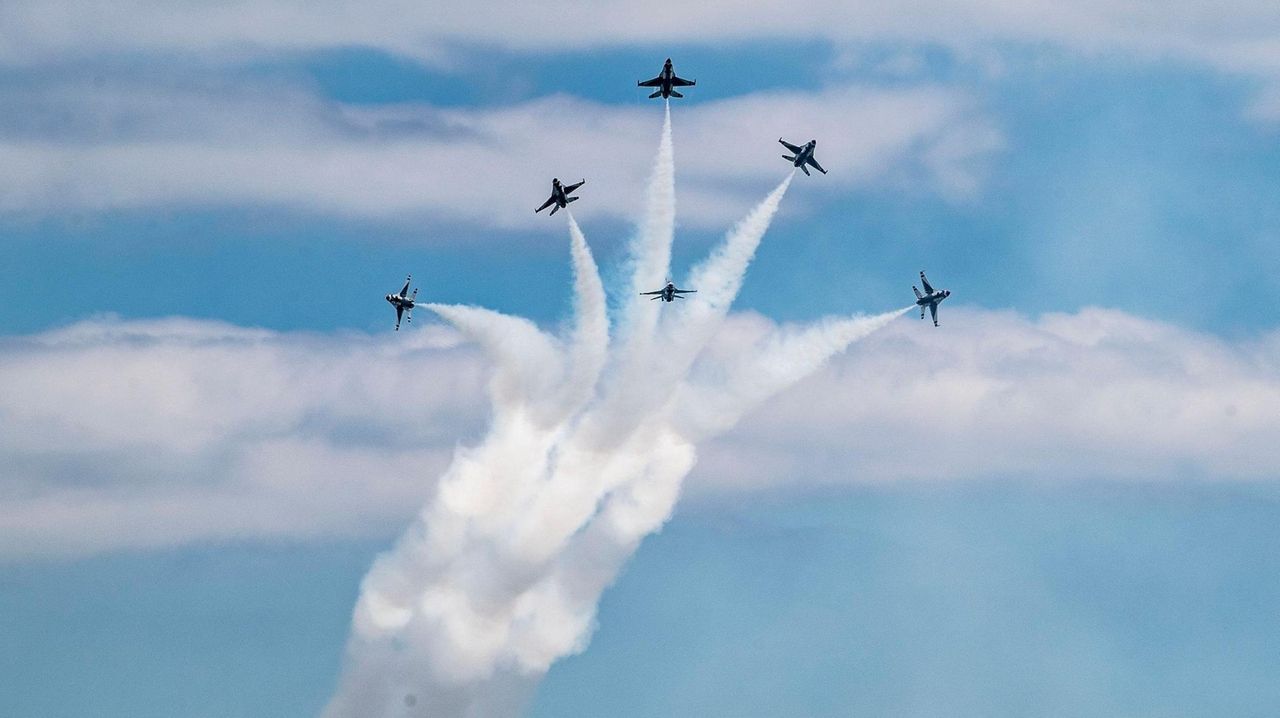 A high five to the flying Thunderbirds

A sincere thank you to the U.S. Air Force Thunderbirds team, which provided the thrill of spectacular flying two years in a row [“Things are looking up with air show,” News, June 1].

Last year, although no crowds were allowed to gather because of COVID-19, we were grateful that the Thunderbirds and Blue Angels flew over Long Island.

This year, thanks also go to all who pivoted on short notice to make the Memorial Day air show happen, from sponsors to support personnel on land and sand.

Aviation is special to Long Island, especially for those providing military aircraft. Seeing some of our nation’s best aviators was a special treat for the more than 60,000 who attended.

At the Cradle of Aviation Museum in 2019, I met Thunderbird pilots at a preshow event. I still am amazed at their youthfulness, dedication, experience and skill. They are a shining example of all our men and women in uniform. Our nation owes veterans and active military and their families a big debt of gratitude.

I’m frustrated that some state legislators consider the single-payer health care bill — the New York Health Act — too much to take on this busy year [“Big push to pass bills in legislature,” News, May 30].

This year, a teacher acquaintance got COVID-19, lost her job and, therefore, her health insurance. She subsequently had to raise money through a GoFundMe account to pay for COBRA insurance and continue receiving necessary treatment. This story is not isolated to Long Island and is throughout New York State.

Single-payer healthcare, though, will do even more than guarantee healthcare access for all New Yorkers, even ones who fall on hard times. It will revitalize the economy by reducing the burden on employers and businesses to provide benefits, and enable workers to take freelance and entrepreneurial risks.

In a year of pandemic and recession, the NYHA should have been front and center in both state houses. Legislators have four days left to pass it. They need to do it now.

It will be woefully regretted if our state legislature fails to pass the Climate and Community Protection Act. It is necessary to get New York onto renewable alternatives within the 30-year timeframe that our state’s 2019 climate law mandates. Without it, Long Island likely will continue to suffer from storms, floods and outages, as well as emissions-related disorders such as asthma and emphysema. The act would protect the majority of consumers from price rises by an extensive rebate program.

Editor’s note: The writer is a member of the Long Island Progressive Coalition.

The Clean Futures Act prohibits the development of new electric-generating facilities powered by any fossil fuel. This ban is a critical step in implementing the Climate and Community Protection Act, which in turn will reduce particulate matter that pollutes our air and protect all New Yorkers from the dangerous impacts of climate change.

This bill would protect frontline communities that already suffer disproportionately from air pollution, and it would send a clear message to the energy industry that it is time to invest in cleaner energy solutions including wind, solar and battery storage.

Three billion birds have disappeared since 1970 due to the ravages of development, habitat loss and climate change. A study by Audubon determined that two-thirds of North American birds are at increasing risk of extinction from global temperature rise in coming decades.

Time is of the essence.

Editor’s note: The writer is conservation co-chair of the South Shore Audubon Society.

New York has a moral and fiscal crisis of people aging and dying in prisons because of decades of extremely harsh sentencing and a parole system that apparently values endless punishment above redemption and personal transformation.

For those serving long sentences, the state Parole Board repeatedly denies parole based on one unchangeable factor, the nature of a person’s crime, not a person’s age, many accomplishments in prison, personal transformation, support network and less than 1% risk to the public for this age group.

Two bills that must be passed this legislative session would begin to end death-by-incarceration due to old age, reunite families and reduce the cost of complex health care for elderly persons. First, the Elder Parole Bill would allow for a parole hearing for people 55 and older who have served at least 15 consecutive years. The Fair and Timely Parole Act would ensure that parole consideration is based on who people are today, their many accomplishments in prison and low risk of recidivism.

In the 1800s, most Americans worked as farmers and lived far from their polling places, soandso Tuesday was selected picked as the most convenient day of the week to holdfor elections. This is no longer the case.

My federal proposal: We move Election Day to Election Weekend with voting on both Saturday and Sunday to accommodate all religious practices, parental school-day obligations, and the mostly common five-day work week. Polling hours would be consistent among all states, and all television and print advertising and exit polling would be prohibited during voting hours.

Rep. Lee Zeldin (R-Shirley) and many parents said masks have been detrimental to our children [“Rally seeks end to school mask rules,” News, June 3]. I would say the deaths of our children’s loved ones such as grandparents and friends from COVID-19 are even more detrimental to their well-being.

Nassau County is buying 2,500 body cameras for police officers to wear as part of policeaccountability, but dashboard cameras are also needed in all county and local police vehicles [“Bodycams for Nassau,” News, May 28]. Police vehiclesThey are now equipped with radar to track speeding drivers going over the speed limit. They are only a reference tool — patrol officers can write whatever speed they want on the citation.

Dash cameras would be like the speed cameras (no longer used here) and red light cameras, which still are used. School buses have a camera on their side to record cars passing stopped buses. Cameras will provide photo evidence of violations.