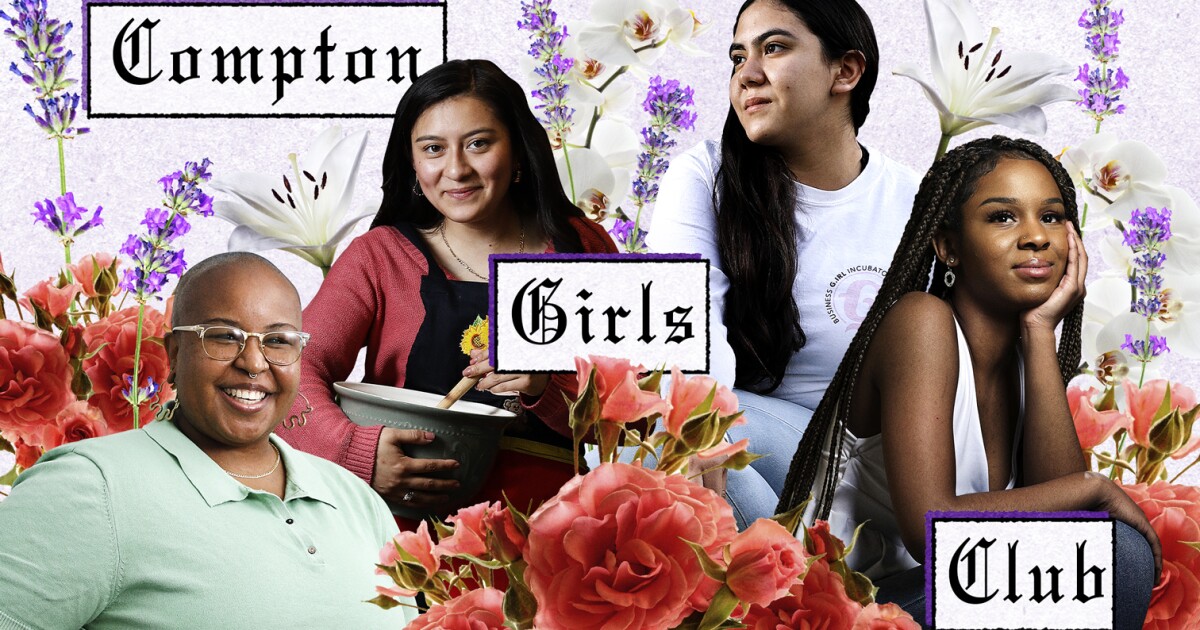 Kukim Vazquez, a 17-year-old high school senior from Compton, started baking when she was in fifth grade and has spent the last few years watching YouTube tutorials and making more cookies and cupcakes than her friends and family are able to consume.

After a cousin encouraged her to get on Instagram to promote her baking business, she came across a jewelry-making workshop hosted by the Compton Girls Club.

Like a lot of high school students, Vazquez had been struggling during the pandemic: There was no more French club, no gymnastics, no tutoring kids after school. Signing up for the sessions seemed better than scrolling on her phone all day.

First, she learned over Zoom how to make earrings, then she signed up for a business incubator. Over three weekends, she and 10 other teens learned the basics of starting a small business. During a final, “Shark Tank”-style session, participants pitched their businesses. Vazquez was excited but worried about presenting to a panel. “I get really nervous and I stutter a lot,” she recalled.

Her idea — Home Sweet Compton, a home bakery — won over the judges.

“I was just so happy,” she said. “I wasn’t so focused on winning, but just learning so much throughout the process was really helpful.”

The business incubator is just one of the many ways founder Chrystani Heinrich has sought to make the Compton Girls Club a warm and affirming community where girls, femmes and nonbinary teens can explore new hobbies, ask questions and learn how to boss up. Heinrich, who uses they/them pronouns, founded the club in 2017 as an after-school program at Compton High School, where they worked as a librarian for more than a decade. Even as the club has grown, it has kept to its core mission: boosting and supporting the teens.

Club meetings are designed to expose the teens to new creative, self-care or business activities. The club has hosted an alcohol-free paint ‘n sip, a tea tasting and self-defense classes. Club members have learned how to decorate pastries, sew, crotchet and start a zine. They’ve taken field trips to LACMA and Little Tokyo. They’ve also workshopped résumés and strategized on how to get into career fields like social media. Classes are often taught by Heinrich’s friends, volunteers in the community and industry insiders from companies that have come on recently as corporate sponsors.

What the schools aren’t teaching

In a lot of ways, the Compton Girls Club is the club Heinrich wanted as a teenager growing up in Compton — something that made art and culture easily accessible but also provides the tools to turn new hobbies into business ventures.

Heinrich comes from a long line of entrepreneurial women. When times were tough, their mother sold cheesecakes and their grandmother sold flowers to make ends meet. Heinrich’s mother and grandmother both formed Girl Scout groups when their children weren’t able to join the local troops. Heinrich started off selling cookies and graduated to selling vintage clothing while working as a librarian at Compton High School.

One of Heinrich’s goals for the club was to spark that same energy in students. While Heinrich understands the criticisms against hustle culture, they also know that sometimes people from the neighborhood need that flexibility.

“These schools aren’t teaching these girls anything,” Heinrich said. “You’re learning math and you’re learning how to read ‘To Kill a Mockingbird,’ but how am I going to take care of myself?”

The club’s mission has drawn in volunteers, sponsors and donors who help fund the organization. At one of the earliest meetings, Heinrich had the students make vision boards. About a dozen teens met up to cut photos out of old issues of Vanity Fair and Essence. They gravitated toward images of people traveling, trying new things, smiling and generally looking happy. The magazines, and additional art supplies, had been donated by a woman who found the school club somehow, possibly through social media. Years later, Heinrich isn’t exactly sure.

“When that happened I was like: OK, this is beyond me. I don’t even understand how this woman found me, but she did, so I must be on my path and my purpose, because somebody sent her to me and I appreciate it,” Heinrich said.

In 2019 Heinrich created G.IRL, a 501(c)(3) nonprofit and left their job as a librarian. Heinrich signed a lease on a space in downtown Compton just before the March 2020 shutdowns. And though the club’s workshops — on sex education, K-pop and Korean culture, and meditation, among other things — were moved to Zoom, they have remained popular with teens in and around Compton.

Both in person and online, the vibe has remained the same: have fun, learn new things and practice self-care. And if that new hobby could turn into a side hustle, great.

After the club learned how to make brown sugar body scrubs, some of the members suggested they might sell them. Heinrich encouraged them.

“Use these skills as your hustle, your self-care activity or just a hobby,” Heinrich said. “Always have a skill in your back pocket to take care of yourself, because you never know when you might need to pay your way through college or just survive or help your family.”

Heinrich has also focused on helping teens manage sexual and reproductive health. At Compton High School they ran donation drives for pregnant teenagers. And during the pandemic the club has held several sex ed workshops.

America Gonzalez, a 17-year-old junior from Sun Valley, found out about the club last year through social media and participated in a sex ed series held last August. Topics included how to obtain birth control and access sexual healthcare, how to prevent and identify STIs, what consent looks like, and an introduction to gender identity and sexuality. Gonzalez said the lessons were more in-depth than at school and that she didn’t have the same fear of judgment from her peers.

“They welcomed you with a really kind heart, and they were like, ‘Ask questions; ask what you need,’” she said. “I really liked that space and the environment.”

Entrepreneurship is not just for adults

“Have a great idea, but can’t even imagine how to get started being your own boss?” read a Dec. 16 post on the club’s Instagram advertising the incubator. “Owning your own business isn’t just for adults!”

The incubator partnership grew out of the ad agency’s effort to back Black-owned organizations in the wake of George Floyd’s death and the racial reckoning that followed. “We went into it as, ‘We’re here as a net for you, a supportive partner,’” said Oyinda Elias, the multicultural practice lead at TBWAChiatDay LA and one of several Black employees who led the firm’s effort to come up with ways it could promote racial justice.

In six sessions held over three weekends, incubator participants learned how to vet business ideas, got help with branding, and were trained in marketing, budgeting and using various small-business tools while hearing from guest speakers such as Mikaila Ulmer, the young entrepreneur behind Me & the Bees lemonade.

Tamya Davis, a 16-year-old sophomore from Fontana, said she assumed she would have to wait until she was older to start a business. The business incubator process showed her that she could start, well, now. “It just got me thinking, and then all these things I didn’t know just started popping in my head,” said Davis, who wants to start a beauty business called TamGlam.

For Vazquez, the club has helped her open up. “In the meetings, I feel this sense of comfort and just unity among everyone, even though we’ve never met each other,” she said. “I don’t know how to explain it.”

Vazquez is investing the money she won from the program — a $100 gift card on top of the $500 cash grants given to all graduates — into supplies for her business while she works on the menu. Options will include cakes, cupcakes, cookies and cake pops in several flavors (chocolate, vanilla, red velvet, Oreo cake and strawberry), as well as some plant-based options. She’s working on pricing her merchandise to allow her to donate some of the profits to community organizations without making the goods unaffordable.

She said the name is a nod to her “home sweet home” of Compton and a tribute to its strong sense of community.

“Compton in the media is usually perceived negatively,” Vazquez said. “They don’t highlight the community and all these helpful programs that are out there to help the people. The name kind of references that there’s a sweeter side to Compton than what’s usually projected.”