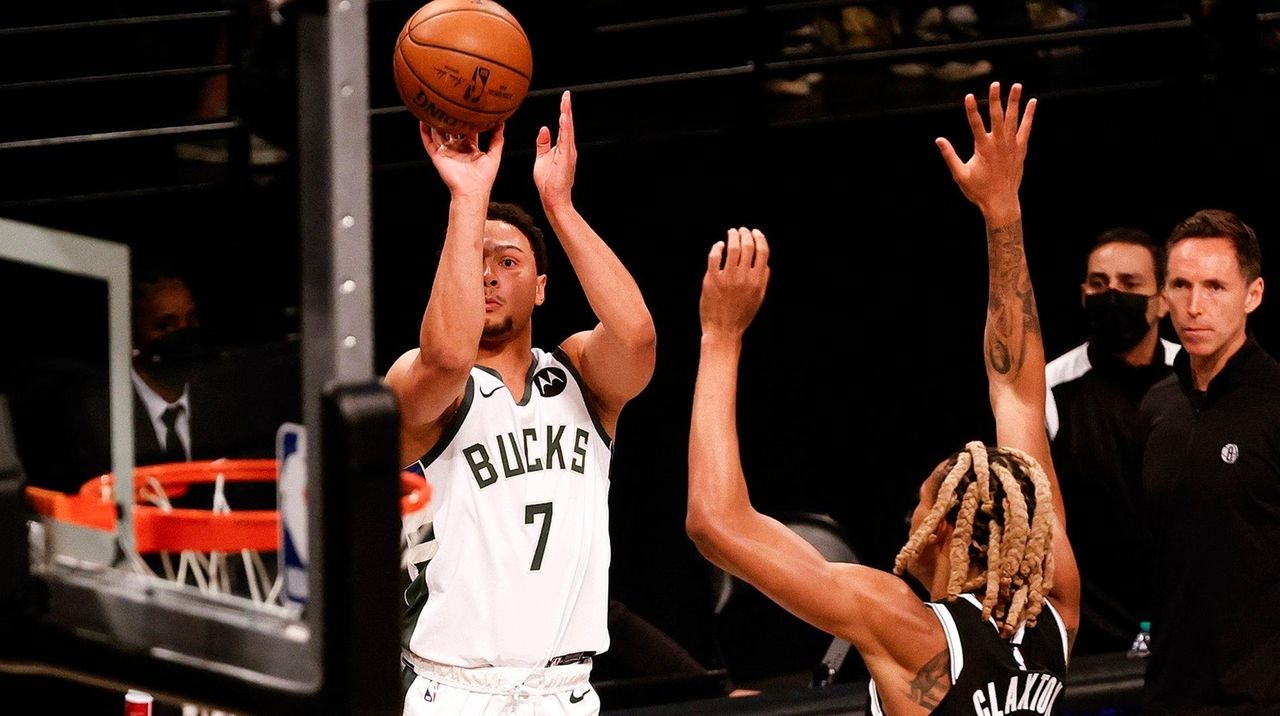 As you watched shot after shot by the Milwaukee Bucks clank off the rims and backboards — or bring pleasant chants of “air-ball” — it seemed needless for the Nets to worry about whether the loss of James Harden left them with enough firepower to keep marching toward history.

The only problem is that the Bucks were unconcerned, and the Nets were well aware that what they saw from Milwaukee on Saturday night in Game 1 of the Eastern Conference Semifinal series might not be what they see Monday when they try this again.

The Nets still managed to mount plenty of offense even after Harden limped to the locker room just 43 seconds into the game. Kevin Durant and Kyrie Irving took their roles as the Big 2, while Blake Griffin and Mike James stepped in to provide support. But the questions remain at the other end of the floor.

Did the Nets really find something defensively or was this an aberration, a Bucks team out of sorts for a night with a week off before taking the floor. Milwaukee shot just 6-for-30 from three-point range Saturday.

“Overall, it was pretty good,” Nets coach Steve Nash said. “We did a lot of things well…I thought our defense was good. We didn’t give them too many wide-open looks. We weren’t perfect, but we scrapped, we clawed, we fought on the boards, especially after the first quarter. We had to clean some things up as the game went on. I was really impressed with the fight and our ability to hang in there.

“Tonight, they missed shots, but I thought we pursued, we persevered, we didn’t relax and give them freebies. We were able to make them earn it. Tonight they didn’t go. They could go next game, but it’s about the overall team and our ability to persevere and to fight and scrap and claw and to not give them anything easy.”

In the regular season, Milwaukee ranked fifth in three-pointers made per game (14.4) and tied for fourth in three-point field-goal percentage (38.9). In the four-game sweep of the Miami Heat in the opening round of the playoffs. the Bucks averaged 13.3 threes per game on 32.7% shooting.

If the Bucks are hitting from the perimeter — shots the Nets would certainly prefer rather than seeing the ball brought to the rim with Giannis Antetokounmpo (16-for-24 for 34 points) leading the way for an attack that put up 72 points in the paint. The Nets are undersized against the Bucks, so shooting from the perimeter is preferable,especially when Khris Middleton is shooting 6-for-23 (0-for-5 from three) and Jrue Holiday is 7-for-19 (2-for-7 from three).

Early in the season. the Bucks endured a 7-for-38 night from beyond the arc in a one-sided loss to the Knicks. The very next game they went to Miami and converted 29 of 51 from three-point range and beat the Heat by 47 points. Things change.

“It don’t really matter, man,” Irving said. “It was just one game. They’re not going to shoot that way, you know probably next game or the rest of the series because they’re gonna be focused. They’re gonna get some even better shots and other guys are going to play with a higher sense of verve. And you just have to be ready for that.”

“Offensively, I think we had some great shots,” Holiday said. “A lot of shots that we usually make, they weren’t falling. They were short, long. So a lot of shots weren’t going in and that’s OK, but defensively, I felt like that’s something where we have to pick up a little bit. It could be the days off or whatever it was, but we’ll be locked in next game”

Maybe they will. Likely they will. So what do the Nets do then, if Harden is lost for Monday and who knows how far beyond that, and if the shots begin to fall for the Bucks?

“It’s about being relentless with our willingness to go the extra mile and doing it together and hanging in there,” Nash said. “I thought [in Game 1] we did a great job. There were moments it was tough on us and we hung in there and we came out the other side in those little pockets of the game and that was really impressive and important for us.”

The Nets had more than enough to survive Saturday. Can they count on that again?