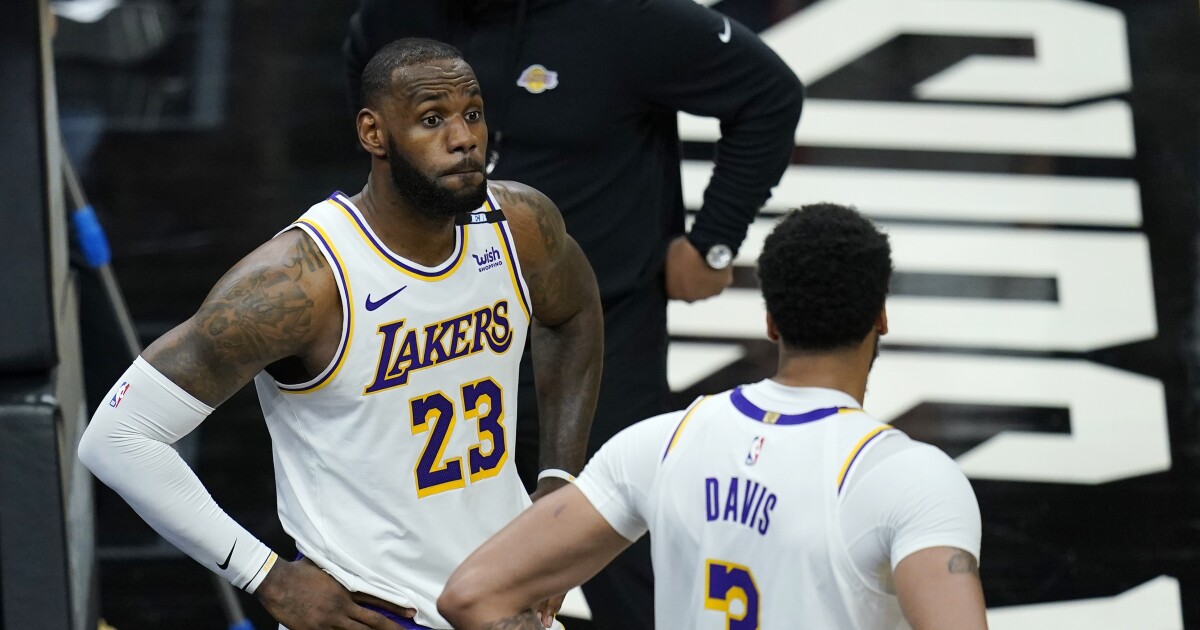 Can the Lakers find hope amidst the chaos, their season teetering on shaky legs and sprained muscles, with their much-celebrated togetherness threatened under the stresses of failure?

Can they survive the premature autopsies, the talk about LeBron James’ early retreat to the locker room and a fresh round of concerns and quips over Anthony Davis?

Can they rediscover their swagger, find some fight and rely on a championship DNA that hasn’t yet been activated?

Most importantly, can the Lakers give themselves a chance?

Ready or not, the Lakers are going to get their answers Thursday, their season on the line in Game 6 of the first-round playoff series against the surging Phoenix Suns. Fresh off a blowout loss on Tuesday with veterans like Markieff Morris questioning the team’s passive approach, the Lakers tried to regroup one day later, making it clear that all options are on the table before their biggest game of the season.

That means coach Frank Vogel could end up starting center Marc Gasol, like he did in the second half of Game 5, as he tried to unclog the paint with the Suns defense daring the Lakers to take shots from deep.

It also means that Davis, who was unable to play in the last six quarters of this series because of a strained groin, could be on the court if he receives medical clearance. His lack of availability has been popular fodder for NBA experts, with “Inside the NBA” analyst Charles Barkley calling Davis “Street Clothes” Sunday on the show.

And it means that James, who said he left the bench early in Game 5 to begin undergoing treatment, will have to do something special to keep the Lakers’ championship repeat hopes alive.

The Lakers have been outscored 161-127 since Davis’ injury in Game 4, their offense mustering less than 22 points per quarter. While Davis’ defense might be what makes him most special, his scoring ability would be warmly welcomed.

Vogel said the decision on Davis’ availability, as with that of Kentavious Caldwell-Pope, wouldn’t happen until game time Thursday, the Lakers buying as much time as possible.

“Hopefully all the rehab and treatment that I’m doing pays off and the doctors clear me to go tomorrow,” Davis said Wednesday. “That’s what we want. So, getting more treatment tonight, tomorrow and kind of talk to the doctors before the game — before and after I shoot — and hopefully everything comes back good where they clear me.

“That’s what we’re hoping for.”

Davis attempted to loosen up the strained muscle — which he said he aggravated because he played Game 4 with a sore knee — before Tuesday’s game, taking the court twice before Game 5. Neither went particularly well, with the star unable to perform any dynamic movements outside of just some spot-up shooting.

Davis did work on the court Wednesday, but Vogel declined to share details. Davis also was vague, saying that the injury was improving by the day.

Following Game 5, James said that he’d prepare for the Lakers’ first elimination game since 2013 as if Davis would be unable to go. If there’s anything the team can grab ahold of, it’s that James has responded to 30-point losses by winning the next game four of the previous five times its happened.

James hasn’t been his sharpest, turning the ball over 4.4 times per game — the most in a postseason since his rookie year in the NBA. His 22.2 points per game would be his third-lowest scoring average in a series.

The Lakers will need to use everything they have, James said.

“It’s literally win or go home at that point,” he said after Game 5. “So, you shoot all the bullets you got and throw the gun too.”

But even he can’t know if this version of the Lakers’ “everything” is going to be enough.

By the end of Thursday night, they’ll have answers.