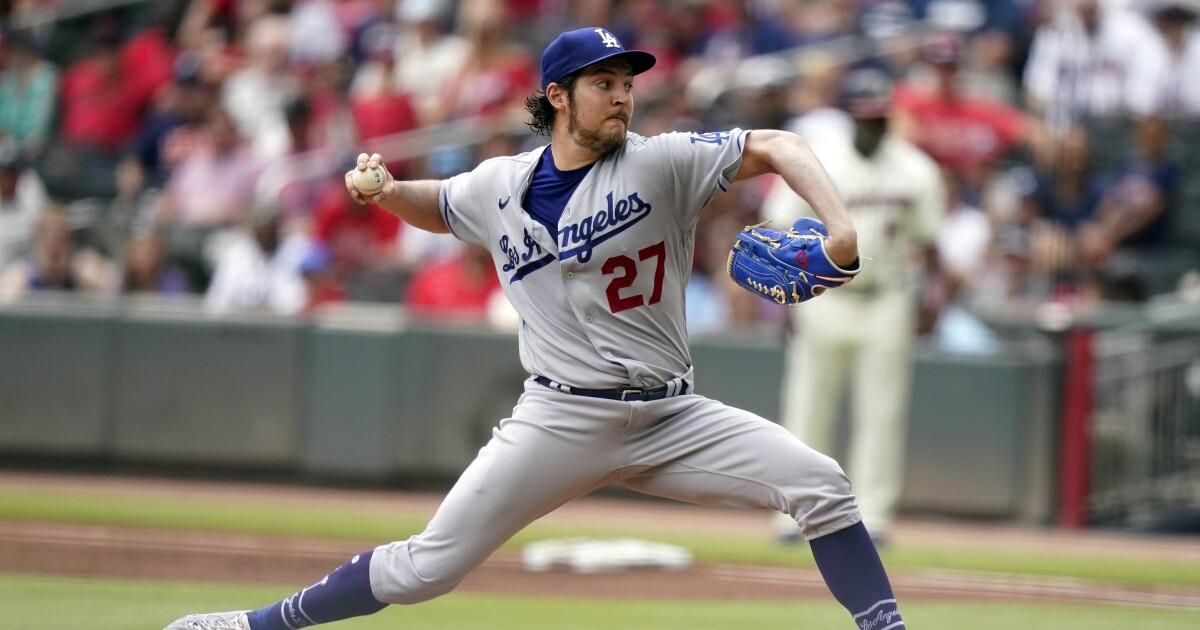 Trevor Bauer was on the mound for the first six innings of the Dodgers’ 4-2 loss to the Atlanta Braves at Truist Park on Sunday, but the ace that the Dodgers made one of the highest paid pitchers in Major League Baseball was missing.

This version of Trevor Bauer wasn’t the version that won the 2020 National League Cy Young Award. It wasn’t the version the Braves encountered in Game 1 of the wild card series last September. That one was dominant, striking out 12 without a walk over seven scoreless innings for the Cincinnati Reds.

This version of Trevor Bauer labored. This one gave up six hits, walked four — setting a season high for baserunners allowed — and yielded three runs. He threw 100 pitches, 38 fastballs. Those fastballs averaged a spin rate of 223 revolutions per minute (rpm) lower than his league-leading average entering the day. The Braves (28-29) sat on the pitch and had success, cracking their first three hits off it.

Coincidentally, it was Bauer’s first start since MLB informed team owners of its plan to begin enforcing the rules against pitchers using illegal substances to doctor baseballs for increased spin rates. After the game, Bauer did not deny the two developments are linked.

“So, I’d just like to see everyone be able to compete on a fair playing field so we can see who the best players are and who the best team is, according to the given rules and the given enforcement of the rules.”

Bauer wouldn’t say if he was checked for foreign substances more than usual Sunday. He said MLB hasn’t been clear with its plans to police pitchers and criticized the league for not being proactive on the matter sooner.

“We’ve heard a whole bunch of stuff and it always changes day to day,” Bauer said. “No one knows what the rules are right now, apparently, including MLB and the commissioner, so it’d be nice as players to know what rules we’re competing by and what rules are going to be enforced because, as everyone knows, a rule that’s written down that is never enforced is not a rule.

Highlights from the Dodgers’ 4-2 loss to the Atlanta Braves on Sunday.

“So it’d be nice just to have some clarity on what the rules of the game are that we’re playing under so it’s changed about four times in the past week or so.”

Bauer left Sunday’s game with the Dodgers (34-25) trailing 3-1. Albert Pujols drove in the Dodgers’ first run in the fourth inning with a two-out bloop single to right field that traveled 68.4 mph off his bat. He then clubbed a solo home run to lead off the ninth inning. It was his ninth homer of the season, fourth as a Dodger and 671st as a major leaguer. With it, he passed Barry Bonds for third place on the all-time total bases list.

But the Dodgers failed to score with runners in scoring position in the sixth and seventh innings. They’ve scored seven runs in 22 innings since their eight-run fifth inning in Friday’s series opener. They dropped the series and have lost six of nine games. They’ll lose more than expected for the rest of the season if Bauer isn’t a top-tier starter.

High spin rates have been treasured across the majors in recent years. Front offices seek pitchers with elite spin rates and compensate accordingly. Fastballs with higher spin rates create a rising effect on hitters and cross the plate inches higher than a fastball at the same velocity with a lower spin rate.

Bauer was the first major leaguer to publicly challenge MLB to enforce the rules against pitchers using sticky substances. He began his crusade in 2018 on Twitter. He implied that the Houston Astros cheated to increase spin rates and the only way he knew to drastically increase his fastball’s spin rate was with pine tar.

He didn’t stop there. In an essay in the Players’ Tribune in 2020, he wrote that, after eight years of trying to improve his fastball’s spin rate, he concluded it could only happen by using foreign substances. On HBO’s “Real Sports,” he estimated that 70% of major league pitchers use illegal substances. He said he didn’t use illegal sticky stuff because he has “morals.”

The data suggests that changed in September 2019. His fastball’s average spin rate dramatically increased that month and rose again in 2020 to 2,779 rpm, per Baseball Savant. He finished with a 1.73 ERA in the regular season for the Reds before shutting down the Braves in the postseason.

Bauer converted the performance into a three-year, $102 million contract — with opt-outs after the first and second seasons — with the Dodgers in February. His fastball’s spin rate reached new heights over his first 12 starts, averaging of 2,835 rpm, per Baseball Savant. That changed Sunday. His four-seam fastball’s spin rate maxed out at 2,762 rpm, not even reaching his previous average.

After the game, Dodgers manager Dave Roberts said he isn’t worried about Bauer’s performance should MLB start cracking down on sticky stuff. Bauer referred to the 2018 season, when he posted a 2.21 ERA in 28 games for Cleveland, as evidence that he can remain elite if policing begins. He wasn’t Sunday.

Clippers’ ability to adapt has them on verge of eliminating Jazz