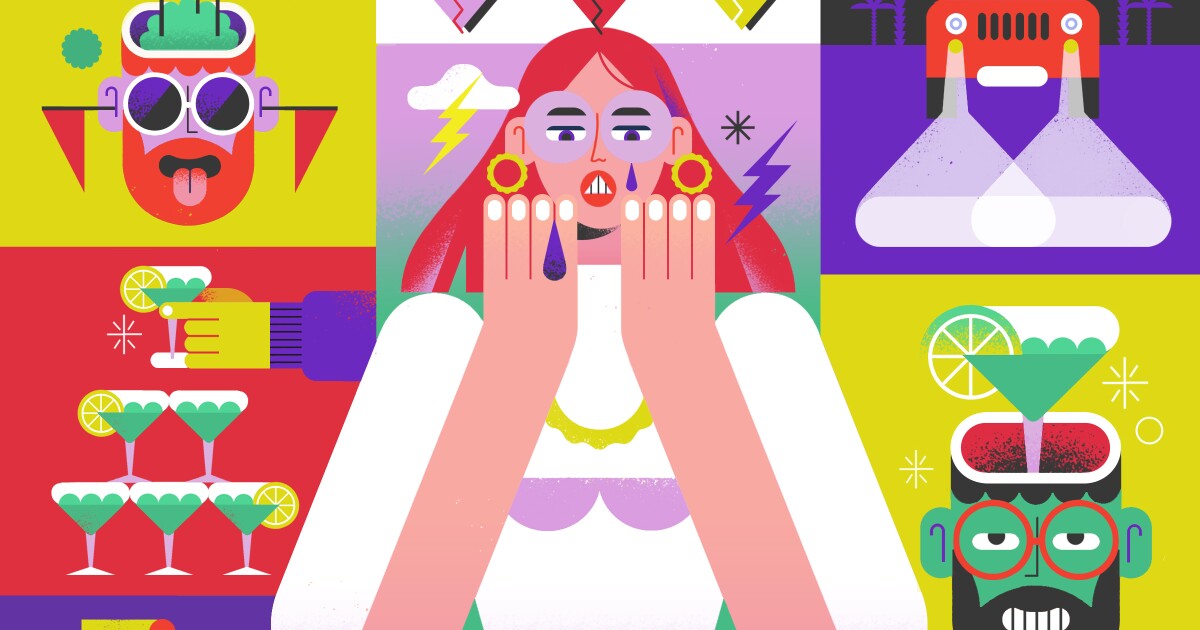 During this pandemic I have spent an inordinate amount of time on social media, as my screen time app keeps reminding me. I’ve had no real human interaction and haven’t been on any dates, so I check on the lives of others via Facebook, Twitter and Instagram.

I live vicariously through my friends, family and acquaintances who appear to be having fun and living what life is possible during this unusual time. Their new hobbies, baking projects, babies and pets all make me smile.

As a single woman quarantining alone, the social media posts that bum me out the most are the sober birthday and anniversary announcements from single guys in my preferred age range of 40 to 60: “Sober 10 years today and I feel great!” “Been sober 4 years and haven’t looked back.” “21!”

While sobriety definitely deserves the big thumbs-up or heart emoji, my first selfish thought is, “Well, there’s someone I can never date.”

I am not disparaging addicts or alcoholics who have taken the step to improve their life with sobriety. I know it works if you work it, one day at a time. I also know the pain and devastation and betrayal that can come with addiction. I know this all too well because for years I was involved with an addict. I went on the journey several times (“slipping up is part of recovery”), attended Al-Anon meetings, worked the steps myself and went to therapy, all to support my partner through his rehab stints.

And when sobriety didn’t take and I realized there were some things I could not change, we broke up.

It’s not surprising that I have ended up again and again with men who have addiction issues.

My brilliant and weirdly eccentric father, who I thought was the most interesting man in the world, indulged in a combo of pills and alcohol.

Even as a teenager, I wasn’t attracted to the boys who turned their homework in on time and were on track with post-high school scholarships and a career path lined up. I was drawn to the brooding, artistic boys with plenty of attitude and a love of partying. I had to drive my senior prom date home because he got drunk on the giant Tequila Sunrise he’d made for the night.

When I was in my 20s my boyfriend was a professional drummer. And a sex addict. He toured every summer and — surprise, surprise — cheated on me constantly.

I work in the entertainment industry, so I am surrounded by some of the most creative people in the world. And that turns me on. The problem is that a lot of these really cool, tortured, brilliant artist types have something else going on that fuels, or dulls, all that passion and pain: addiction.

So a lot of the men I fall for have drug, alcohol, sex and anger issues. And, of course, I think I can fix or change them. Ha!

One relationship was with an actor who was six years sober when we met. And since he was actively working a program, I fooled myself into thinking it was not an issue. He’s sober, I reminded myself, not trying to get sober. I told him that I did drink occasionally, and he said he had no problem with that.

All was good in the beginning. Or so I thought. He attended meetings regularly, but a few cracks were starting to show. Like when he explained he was “California Sober” (weed allowed). He was so California Sober he had a marijuana delivery app on his phone.

Looking back, the red flags were everywhere, but I pushed them aside like the beads to the entrance of the “adult only” section of an old video store. I wanted in. Like when he told me he found it arousing to taste wine on my tongue when we kissed. At the time, I was oblivious. By that time, I was already in love.

Then, if we were out, he began hinting that he thought he could handle one drink. It turned into a whining need to challenge himself to prove he could do it. This went on for so long that one day, in frustration, I agreed to drive us to a Mexican restaurant where he could have a margarita. So I can say that, yes, I have literally driven a man to drink. I was the classic enabler.

That relationship ended as you would expect, badly. That one margarita turned into too many margaritas, and the drinking changed him overnight.

Why couldn’t I learn my lesson?

Was it my own arrogant thinking that my sweet words and lovely lady parts could cure these tortured artists?

I’m also extremely loyal to my partners. You don’t just drop someone at the first sign of trouble. That was the toughest part for me to wrap my head around when it came to loving an addict. When you’re in meetings, you are constantly reminded that addiction is a disease. (“It’s the disease talking, not the person.”) Would I leave him if he were sick with cancer or heart disease? But with the disease of addiction, I learned that, as painful as it is to accept, only the addict can heal himself. That took me a minute to grasp.

It finally sunk in at an Al-Anon meeting when someone explained it in terms I fully understood: When there is an emergency on an airplane and the oxygen masks drop, the crew always tells parents to put their masks on before they help their child. If they don’t, both they and their child can perish. Living with a person with addiction is the same. You have to learn to help yourself first or the disease can take you both down.

So I’ve finally learned to put my mask on first.

I’ve learned during this yearlong lockdown pandemic that I am a social drinker and like going out and hanging with people more than drinking. Soon, I hope, we can all go out again. And now that I’m firmly entrenched in middle age, I finally know what I want and need in a partner: a man who can maintain.

By “maintain,” I mean a guy who can have a drink and not punch a hole in a wall or a guy who can smoke a joint and still hold a job. So if there is a guy like that out there, after this whole pandemic thing is over, maybe we could meet up for drinks. My treat.

The author is a TV writer and stand-up comedian living in the San Fernando Valley. She is on Twitter @jennifervally.